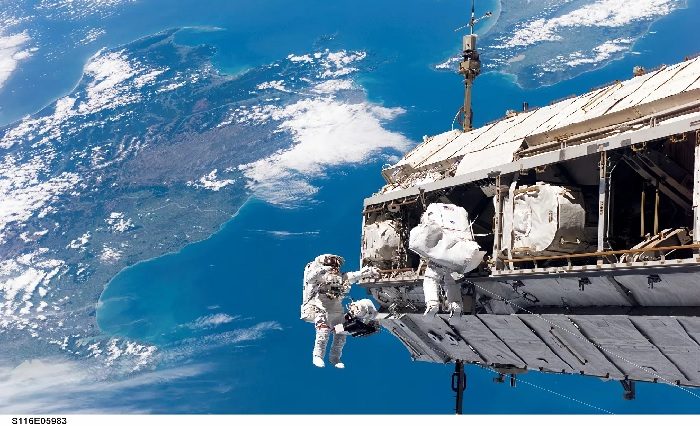 “Scientists have for decades studied how space missions affect human health – blood flow, muscles, skeletal strength – but there have been no comprehensive studies on sex and the reproductive system.”

Looking back at the numerous missions, one might say humanity has already conquered space. We’ve been to the Moon, sent rovers to Mars, collected samples from asteroids. Heck, Elon Musk even sent his Tesla to space! Nevertheless, one thing remains shrouded in mystery – how does lovemaking work in space?

NASA has said it is considering studying sex in space. Speaking to Mic, the agency’s spokesperson said that at the moment, NASA is focused on mitigating the five hazards of human spaceflight and researching ways to help crews work together and remain emotionally prepared during their journey.

However, he noted that the agency would take the appropriate steps when it becomes necessary to conduct research on humans’ reproductive health during space missions.

This may be interpreted as a U-turn, as NASA and other space agencies have previously avoided discussing the subject.

The spokesperson also said that NASA has in the past conducted studies on the subject, but these didn’t involve humans, but instead focused on fruit flies, worms, snails, jellyfish, fish, frogs, chicken (bird) eggs, and rodents.

Why Is This Important?

Technological progress has reached such a high level that travelling to Mars and colonising other planets no longer seems to be the plot of a sci-fi movie. SpaceX is now working on its next-generation spaceship, which could simplify space travel and make it less expensive. The company plans to send humans to Mars before 2030.

NASA, in its turn, plans to land the first woman and the next man on the Moon by 2024 and then establish a human presence there.

Scientists have for decades studied how space missions affect human health – blood flow, muscles, skeletal strength – but there have been no comprehensive studies on sex and the reproductive system.

It is known that cosmic radiation can have detrimental effects on an individual’s DNA and potentially lead to cancer, nerve degeneration, and radiation sickness. The risk of developing a disease increases with the duration of a space mission and will grow significantly when space agencies send astronauts to other planets. According to NASA, a one-way trip to Mars would take about nine months.

Health experts have noted that a good sex life is vital for physical and mental health. Late last year, a group of Canadian researchers called on space agencies worldwide to “embrace a new discipline” of study – “space sexology: the scientific study of extraterrestrial intimacy and sexuality”.

“Love and sex are central to human life. Despite this, national and private space organizations are moving forward with long-term missions to the International Space Station (ISS), the moon and Mars without any concrete research and plans to address human eroticism in space. Rocket science may take us to outer space. But it will be human relationships that determine if we thrive as a spacefaring civilization”, the scientists’ article reads.

The bottom line is, we don’t have answers as to whether our organs will work the same way in space as they do on Earth, let alone what will happen if an astronaut gets pregnant during a space mission. Physicist and astronomer John Millis believes male arousal would be “challenging in space though it could still technically be possible”. Female astronauts could experience serious problems too.

“Vaginal wetness could be an issue as the fluid-like sweat and tears – will tend to pool at the location of secretion in the absence of gravity. This wouldn’t inhibit arousal necessarily, but I imagine it would be uncomfortable or unpleasant”, Millis told BuzzFeed.