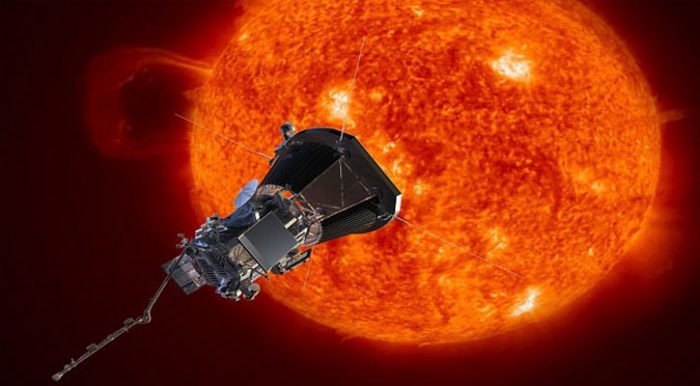 NASA to Send Probe Directly Into The Sun’s Atmosphere

NASA is planning to launch a spacecraft which will make its way to the sun’s atmosphere to conduct research. The space agency is all set to make an announcement regarding this mission on Wednesday, May 31, at 11 a.m. EDT from the William Eckhardt Research Center Auditorium.

The first mission to touch sun is dubbed the Solar Probe Plus or SPP and is expected to launch sometime in summer 2018.

Solar Probe Plus: First Mission To Touch Sun
The specially-designed spacecraft will fly within four million miles of the sun. This distance is almost seven times closer to the sun than any previous spacecraft has managed. NASA will announce the ambitious project in the coming week and is optimistic that it would offer insights into the stars’ behavior, as well as give vital information about space weather.

“Solar Probe Plus will swoop to within 4 million miles of the sun’s surface, facing heat and radiation like no spacecraft before it,” the space agency noted.

Earlier in the year, NASA said that it would launch a robot to the sun to help analyze the dangerous solar activity, which could one day endanger human life on Earth. However, it appears that the agency is now planning to send the probe to the sun’s outer atmosphere to conduct research on the physics of how stars operate and to predict space weather better.

“This mission will provide insight on a critical link in the Sun-Earth connection. Data will be key to understanding and, perhaps, forecasting space weather,” NASA revealed.

According to the scientists, these weather events in space not only affect Earth and the satellites in orbit, but also the astronauts who are currently in the International Space Station.

Solar winds, which are the phenomenon where gases from the sun flow through space at speeds of millions of miles per hour, are known to shake the Earth’s magnetic field. A recent study estimated that the United States alone would lose about $2 trillion if a massive solar wind were to hit Earth without prior warning.

Solar Probe Plus Mission: What Are The Challenges?

The zone in which NASA wants to place the probe will have very high temperatures, almost around 2,500 degrees Fahrenheit. Scientists have come up with a material which they think will be able to withstand this immense heat, as well as relay the data back to scientists on Earth.

NASA officials revealed that the probe will be made of a 4.5-inch thick carbon-composite shield, which would likely safeguard the technological equipment placed inside. At the closest point to the sun, the spacecraft will be moving at speeds of 450,000 miles per hour.
The announcement will be broadcast live on NASA TV on May 31.