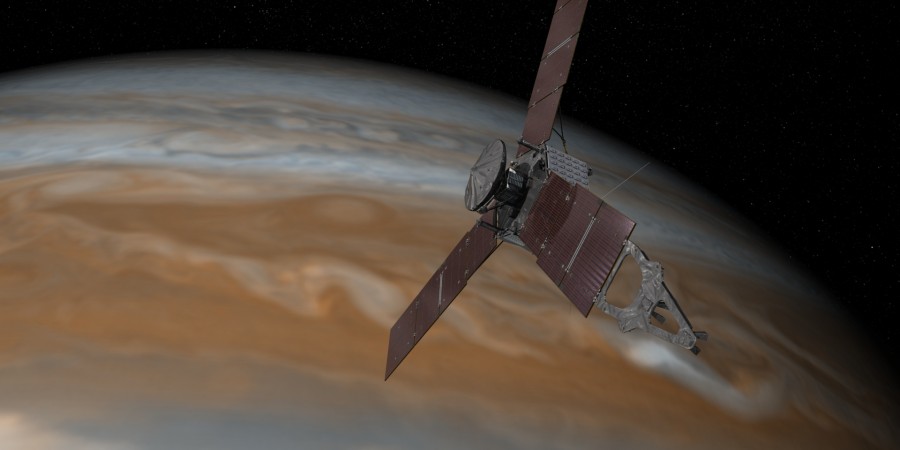 Chilling, alien-like sounds have been recorded coming from Jupiter, and they could be made by enormous creatures living in the planet’s atmosphere.

The sounds were picked up by NASA’s Juno spacecraft, set to enter Jupiter’s orbit today [July 4th], after a five-year journey through interplanetary space.

The space probe is set to stabilize in a polar orbit and beam back information about the planet’s atmospheric composition, magnetic field and weather phenomena. It will also search for clues that could shed light on Jupiter’s formation, so the scientific community is pretty stoked about Juno’s arrival.

On June 24, Juno crossed the boundary of Jupiter’s magnetic field and that’s when the WAVES instrument aboard the craft started picking up a series of fascinating radio signals that sound otherworldly when shifted down into the audible spectrum.

NASA astronomers say this thunderous barrage is caused by a phenomenon known as the astrophysical bow shock. It occurs as a result of the interaction between a celestial object’s magnetic field and the flowing plasma that makes up solar wind. Traveling at supersonic speeds, these charged particles are slowed down and heated by the magnetic field they encounter, giving rise to the eerie, otherworldly sounds.

As majestic an explanation as this is, we know not to accept what we’ve been told as the irrefutable truth. We have little information about what goes on beneath Jupiter’s swirling clouds, and most of it comes from the data collected by a titanium probe dropped from the Galileo spacecraft into the gas giant’s atmosphere in July 1995. It survived for 57 minutes before being crushed by the rising pressure.

We know that earthly carbon-based lifeforms cannot survive on Jupiter but that doesn’t eliminate the possibility for Jovian life to appear and even flourish. Exobiologists believe exotic lifeforms could exist in Jupiter’s thick, 5,000 mile-deep atmosphere, which is composed mainly of hydrogen, but also contains ammonia, methane and water. These are the very gasses that were used in the famous Miller-Urey experiment, the one that demonstrated how the basic building blocks of life could be produced by reactions between the gasses in a planet’s atmosphere.

The experiment was simple: water vapor was added to a flask containing hydrogen gas, methane and ammonia. Miller then passed an electric current through the mixture and, lo and behold, after just one week of zapping the gas, the contents of the flask already showed traces of organic molecules and amino acids, the precursors of life. Jupiter has the gasses and it also has the lightning storms to perform its own experiments. 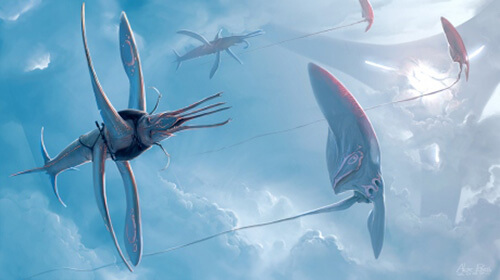 ARTIST’S RENDITION OF POSSIBLE LIFEFORMS ON A GAS GIANT

A number of scientists and writers have hypothesized the emergence of life in Jupiter’s upper atmosphere, with the conditions on the planet leading to the evolution of bizarre, enormous creatures dubbed atmospheric beasts.

In the 1971 science fiction novella A Meeting with Medusa, writer and futurist Arthur C. Clarke explored the possibility of future explorations of the giant planet and speculated on the characteristics of the lifeforms that might inhabit it. Clarke theorized that, alongside microscopic air plankton, Jupiter could be called home by large, jellyfish-like creatures the size of a small city. Held afloat by hydrogen-filled compartments, these rightly-called beasts would feed on the microscopic ones like the filter-feeders swimming in Earth’s oceans.

Even distinguished space scientists like Carl Sagan admitted this could be a possibility. With that in mind, listen once more to the sounds recorded by the Juno spacecraft on June 25, right after it passed Jupiter’s magnetopause. No, that’s not what happens to magnet-women later in life, it’s the area surrounding a planet where its own magnetic field is stronger than that of star it’s orbiting. Basically the planet’s home turf.

Could these incredible sounds have been made by something other than Jupiter’s astrophysical processes—its inhabitants, perhaps? The complexity of these rising and falling tones is something that needs to be taken into account and it’s been suggested before that this music of the celestial spheres strongly resembles the intricacies of intelligent speech.