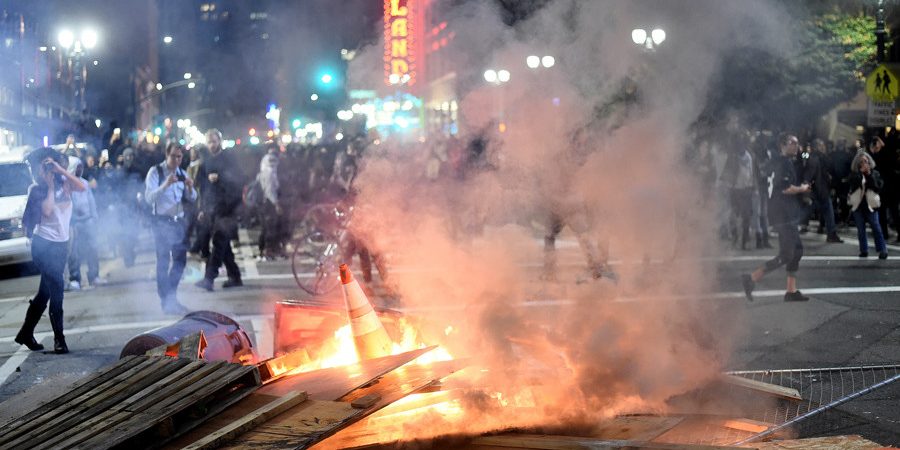 Thousands across major US cities have been protesting the election of Donald Trump as the 45th US president. Demonstrators reportedly burned flags and smashed store windows. Dozens of arrests have been made following the rallies.

About 1,800 people joined an anti-Trump rally near Trump International Hotel and Tower, chanting “No Trump! No KKK! No racist USA.”

“I’m just really terrified about what is happening in this country,” 22-year-old Adriana Rizzo in Chicago told Reuters.

I think all of LA is here tonight- in solidarity with the Millions of voters across the country protesting trump! #notmypresident #trumpprotest

I am also so proud of SoCal right now! Although I was happy to be protesting here in Portland, part of me really would have loved to walk down those LA freeways. So powerful. #shutitdown #peacefulprotest #lapride #thisiswhatdemocracylookslike #notmypresident

Tonight in NYC, we marched in unity. #notmypresident #lovetrumpshate pic.twitter.com/RZ3PgkmbGx

I hope every1 watching on the news/ social media is hearing us! We stand in solidarity at this peaceful protest #NOTOURPRESIDENT #LAPROTEST pic.twitter.com/gYr1twQKKs

You can't deprive us from expressing our discontent! Justice shall be made!! ?? #LAPROTEST pic.twitter.com/eXVzZcZU9q

07:24 GMT
At least 30 people have been arrested at demonstrations in Columbus Circle and Trump Tower in New York, police said, as cited by NBC 4 news.

07:23 GMT
Activists smashed store windows and attacked an abandoned police car in downtown Oakland, California. Protestors also smashed the windows of the Oakland Chamber of Commerce and started a fire on the ground floor of the building.

There have been scenes in the streets of people burning trash bins. They also smashed the windows of an abandoned police cruiser and, according to social media reports, set the vehicle on fire.

07:22 GMT
There was also another flag burning in Washington, DC.

So this is now happening. pic.twitter.com/kfapVoNIB7

05:22 GMT
Protesters set an effigy of Trump on fire at City Hall in downtown Los Angeles.