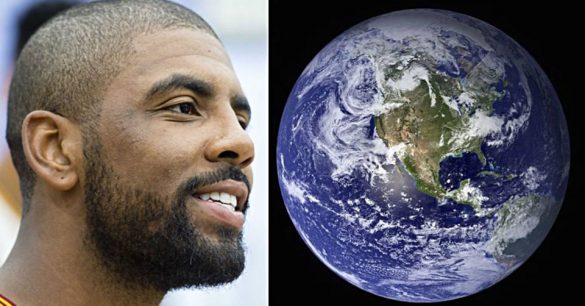 NBA all-star Kyrie Irving of the reigning champions Cleveland Cavaliers was giving an interview before playing in the NBA All-Star Game (won by the East, 192 – 182, a score that also makes you go “Wait, what?”). The interview turned to conspiracy theories (because who wants to hear about basketball from basketball players) and Kyrie had this to say:

While the debate about flat-versus-round has gone on for eons, it was thought to have been settled when pictures of Earth were taken from the Moon (more on THAT conspiracy theory later). Irving says he learned this in school but …

Irving believes the flat-earth theory enough to say it twice in his first interview and repeat it again when questioned about it in a subsequent interview.

I think people should do their own research, man. Hopefully they’ll either back my belief or they’ll throw it in the water.

If you’re thinking that by “research” he means reading science books on the subject, Kyrie doesn’t seem to be a big fan of that either.

He said in the same interview that he doesn’t believe what science says about dinosaurs.

They find one bone and they make up 98 percent of it digitally.

But what about the pictures of Earth taken from the Moon, Kyrie? Don’t those prove that the Earth is a sphere? 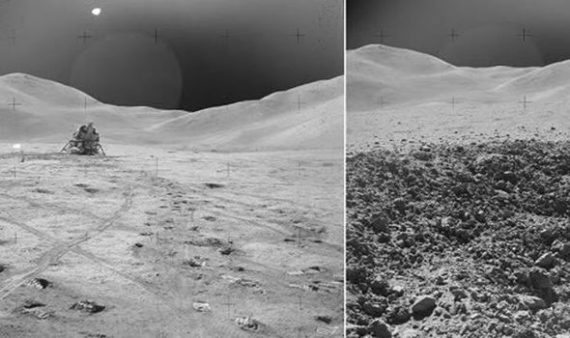 Unfortunately, those lunar voyages were also being debated last weekend. Two photos from the 1971 Apollo 15 mission are making the rounds (pun intended) because someone noticed that, although photos were reportedly taken from two locations miles apart, the mountains in the background appear identical while the landscapes in the foreground are completely different. This is obviously proof that all of the moon missions were faked and the photos were staged in a studio, right?

Or … the mountains are really far off and there no atmosphere on the Moon to distort the view enough to make them look different. Or … the Moon is smaller than the Earth and the horizon looks closer than it really is. Or … Kyrie?

I think people should do their own research, man. Hopefully they’ll either back my belief or they’ll throw it in the water.

This is why we need a March for Science on April 22, 2017. Find one near you, show up and support real facts. If you want to send a message to Kyrie, march while dribbling a basketball.