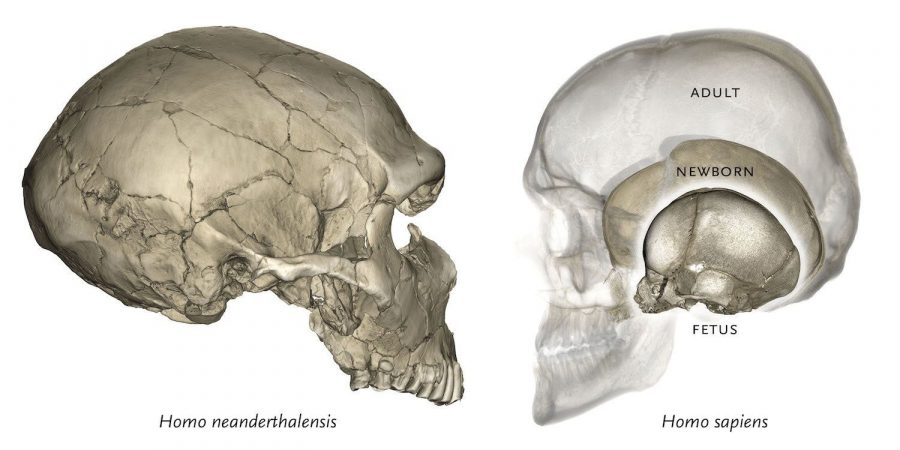 Researchers have gleaned insights into what makes human brains bulbous from our closest evolutionary relative – the Neanderthal – despite them having died out millennia ago, according to an analysis in the journal Current Biology.

Neanderthals and anatomically modern Homo sapiens coexisted in Eurasia for several thousand years before the former vanished about 40,000 years ago.

But Neanderthals shared more than just their geography with our direct ancestors. They walked like us, made jewellery and bone tools like us, and they even bred with us.

In fact, the faint echoes of those inter-species couplings can be seen in all modern humans with non-African heritage, in the form of splashes of Neanderthal DNA dotted throughout the H. sapien genome.

They didn’t exactly look like us, though. They had shorter legs and broader chests.

Their heads, too, looked different. They had larger faces and, despite having similar sized brains, the backs of their heads – and thus the brains contained within – were more elongated.

A large international team headed by Philipp Gunz from the Max Planck Institute for Evolutionary Anthropology in Germany has now taken a close look at those brain shape differences and linked them to the smatterings of Neanderthal genetic sequences within the genomes of modern Europeans.

“It’s a really novel approach,” says Darren Curnoe, a palaeoanthropologist from Australia’s University of New South Wales, who was not involved in the study.

To quantify the brain shape differences between the species, Gunz and colleagues took computed tomography (CT) scans of seven Neanderthal and 19 modern European skulls to generate virtual imprints of the interior braincase.

The team used the scans to calculate the average differences between brain shapes of Neanderthals and humans, and came up with a measure of “globularity” – how globular or elongate the brain is.

They then used this measure on magnetic resonance imaging (MRI) scans of more than 4000 Europeans for whom genome data was also available. Across the sample, some brains were more globular than others.

Next, they turned to the genome data of the cohort and looked at more than 50,000 locations where Neanderthal DNA sequences can be found.

Non-Africans have an average 1-2% Neanderthal sequences in their genome. But because one person’s 1% isn’t the same as the next person’s 1%, modern humans collectively contain roughly 40% of the entire Neanderthal genome.

The team looked for instances where the presence of a Neanderthal sequence was reflected in a less globular brain.

“When we look at elongated versus round brains, we’re looking at differences in the speed and timing of brain growth,” says Gunz.

Before birth, and for the first two years of development, our skulls are soft and thin and take on the globular shape of the expanding brain.

“If you grow really quickly, early on, the thinner the bone and the wider the sutures, the more round you become,” says Gunz. If brain growth is slower, he says, the cranial bones are thicker and more resistant, and the end result is more elongated.

Two Neanderthal genome sequences on chromosomes one and 18 popped out of the analysis as being associated with less globular brain shape. In both cases, the sequences aren’t located within a gene, so they don’t affect the protein that is being built. Instead, they lie in adjacent sequences that can affect how a gene is regulated.

The two genes affected – known as UBR4 and PHLPP1 – are linked to brain development (neurogenesis) and the insulation of brain cells (myelination), respectively.

The Neanderthal variant of UBR4 dials down activity of the adjacent gene. In brains, UBR4 is active in a region known as the putamen, which is part of the basal ganglia, an area important for fine motor control and coordination.

Mice that lack a functional UBR4 gene develop microcephaly, a condition where the brain fails to reach its full size.

“If we want to speculate about what might be the real life impacts, maybe it takes you a little bit longer to acquire speech.”

The presence or absence of Neanderthal variants at this spot in the genome could explain some of the huge variation in how long it takes young children to learn to speak.

“But it’s much too early to tell and it’s not clear at all that the Neanderthal variant is somehow worse than the modern human variant,” says Gunz. “It might be better.”

The Neanderthal variant near PHLPP1 likely dampens white matter connectivity to the cerebellum, a region that regulates motor movements.

“Brain shape differences are one of the key distinctions between ourselves and Neanderthals, and very likely underpins some of the major behavioural differences between our species,” explains Curnoe.

But how much, if at all, the Neanderthal variants identified in this study impact the workings of modern brains is unclear.

“It’s impossible to predict what the cognitive correlates might be,” says Gunz. Any differences in modern humans carrying these variants would be very subtle.

“I don’t want to sound like I’m promoting some new kind of phrenology,” he says. “We’re not trying to argue that brain shape is under any direct selection, and brain shape is directly related to behaviour at all.”

It does suggest that, at least in terms of brain shape, some of those ghostly Neanderthal sequences do still function in modern humans.

The study is far from the final word on genes controlling brain shape.

“Endocranial shape is a complex trait,” says Gunz. “We expect that it is influenced by many genetic loci, each with only a small effect.”

Gunz and his colleagues are now embarking on a far larger study, taking in over 100,000 people whose combined genetic and MRI data will be stored in the UK Biobank.

This, it is hoped, will be a large enough sample to shake out rarer Neanderthal variants that are associated with differences in brain shape.