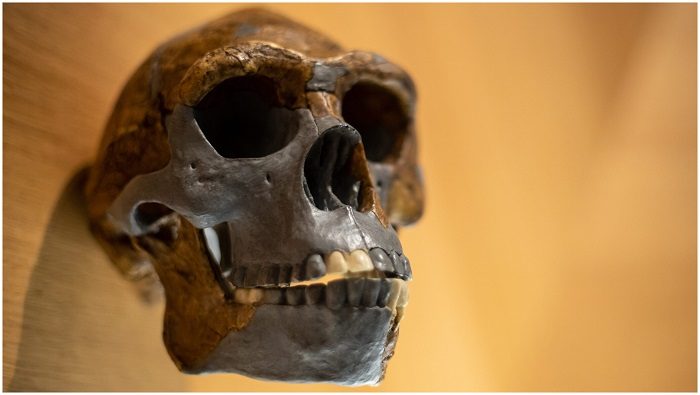 Today’s humans carry the genes of an ancient, unknown ancestor, left there by hominin species intermingling perhaps a million years ago.

The ancestor may have been Homo erectus, but no one knows for sure — the genome of that extinct species of human has never been sequenced, said Adam Siepel, a computational biologist at Cold Spring Harbor Laboratory and one of the authors of a new paper examining the relationships of ancient human ancestors.

The new research, published today (Aug. 6) in the journal PLOS Genetics, also finds that ancient humans mated with Neanderthals between 200,000 and 300,000 years ago, well before the more recent, and better-known mixing of the two species occurred, after Homo sapiens migrated in large numbers out of Africa and into Europe 50,000 years ago. Thanks to this ancient mixing event, Neanderthals actually owe between 3% and 7% of their genomes to ancient Homo sapiens, the researchers reported.

“Our best conjecture is that an early group of anatomically modern humans left Africa then encountered and interbred with Neandertals, perhaps in the Middle East,” Siepel told Live Science. “This lineage [of humans] would then have been lost — either gone extinct, or absorbed by the Neandertals, or migrated back to Africa.”

The new research illustrates the complexity of humanity’s deep history. Evidence has long been accumulating that humans and Neanderthals mated while their populations overlapped in Europe, before Neanderthals went extinct around 30,000 years ago. In 2010, researchers reported that between 1% and 4% of modern human genes in people in Asia, Europe and Oceania came from Neanderthal ancestors. When you add up all the snippets of Neanderthal DNA present in all modern humans today, some 20% of the Neanderthal genome may be preserved, according to 2014 research.

As scientists have been able to sequence more fragile fragments of DNA from fossils of ancient human ancestors, they’ve discovered a complex web of interbreeding stretching back millennia. Some Pacific Islanders, for example, carry pieces of the DNA of a mysterious ancient species of humans known as Denisovans.

The researchers of the new study used a computational method of comparing the genomes of two Neanderthals, a Denisovan and two modern African individuals. (Africans were chosen because modern people in Africa don’t carry Neanderthal genes from the well-known human-Neanderthal interbreeding that occurred in Europe starting 50,000 years ago.) This method allowed the researchers to capture recombination events, in which segments of chromosomes — which are made up of DNA — from one individual get incorporated into the chromosomes of another.

“We are trying to build a complete model for the evolutionary history of every segment of the genome, jointly across all of the analyzed individuals,” Siepel said. “The ancestral recombination graph, as it is known, includes a tree that captures the relationships among all individuals at every position along the genome, and the recombination events that cause those trees to change from one position to the next.”

One advantage of the method, Siepel said, is that it allows researchers to find recombination events inside of recombination events. For example, if a bit of ancient hominin DNA from an unknown ancestor were incorporated in the Neanderthal genome, and then a later mating event between Neanderthals and humans inserted that mystery DNA into the human genome, the method allows for the identification of this “nested” DNA.

The analysis turned up evidence of this sort of nested insertion of DNA. The finding that Homo sapiens seem to have mated with Neanderthals between 200,000 and 300,000 years ago meshes with previous evidence of some sort of mixing event between the two species prior to humans moving en masse to Europe, Siepel said.

The researchers also found that 1% of the Denisovan genome hails from the genes of an unknown ancestor, from an interbreeding event that must have happened, roughly, a million years ago. This mystery ancestor could have been Homo erectus, Siepel said, because Homo erectus likely did overlap in Eurasia with the ancestors of Denisovans and Neanderthals. However, these fragments are tiny and there are no Homo erectus sequences to compare them to, so this is speculative.

In both cases, these interbreeding events were passed along again to modern humans: 15% of the interbreeding sequences found in Denisovans are present in people living today, the researchers found.

The new results are another piece of evidence that ancient and modern human lineages mixed relatively frequently, Siepel said.

“A picture is emerging of a series of distinct but related populations moving around the globe and frequently interacting with one another, with occasional interbreeding events that produced hybrid offspring,” Siepel said. “These hybrid offspring might in some cases have suffered from reduced fitness — this is an area of controversy — but apparently many of them were healthy enough to survive and reproduce, leaving a patchwork of archaic and modern human DNA in Neanderthals, Denisovans and modern humans.”