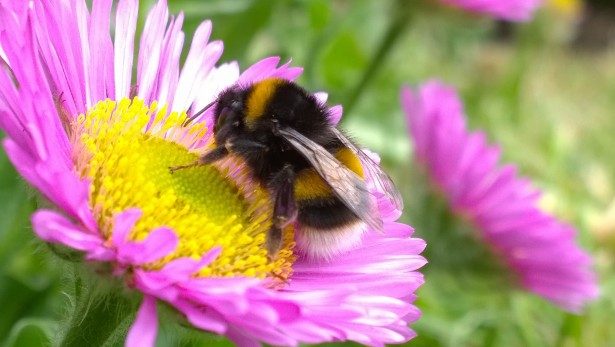 New Research Shows Bumblebees Have Emotions Which Influences Their Behavior , Just Like Humans

With all the conveniences of modernity, the human condition has unfortunately lost some of its connection with the natural world. As we separate ourselves ever more from other species, we find it more difficult to think of them beyond something to be used or exterminated.

Science has a way of reconnecting us, though. A study of bumblebees published in the journal Science found that they possess emotional states that influence behavior, just like humans. The research goes against the common presumption that insects are simple creatures carrying out nothing more than pre-programmed sets of actions.

Previous experiments have shown the flower color behavior was not due to the bees “getting more excited or searching faster,” which “indicates that the sweet sugar water may be causing a positive emotion-like state in bees, similar to humans and other animals.”

“The finding that bees exhibit not just surprising levels of intelligence, but also emotion-like states, indicates that we should respect their needs when testing them in experiments, and do more for their conservation,” said senior author Professor Lars Chittka.

We already know that sweet foods can have positive psychological responses in humans, separate from their effects on the physiology. The possibility that rewards affect the perceptions of even the smallest insect – influencing their behavior beyond a simple programmed response – has profound meaning for the study of evolution and emotional states.

When you walk through the garden, admiring the butterflies and bees that are drawn to the wildflowers you’ve planted, there is more going on than meets the eye. It’s not just a routine of drinking nectar and gathering pollen, but a gathering of beings with emotional states, all making complex decisions.

Why did that butterfly land on your finger? Possibly because he or she was happy, and recognized you as a beneficial organism.

The discovery of bumblebees’ emotional states comes on the heels of depressing news that a species of bumblebee was just proposed for the Endangered Species list. Native bees are in decline almost everywhere we look, as habitat loss and pesticide use put more and more pressure on bees and other insect denizens of our ecosystems.

Neonicotinoids (neonics) are the most widely used pesticides in the chemically-dependent agriculture industry; as more research comes out we learn more about their role in wiping out bees. It was recently revealed that pesticide companies always knew about the detrimental effects of neonics, according to unpublished field trials that most likely did not make it into the governmental review process, either.

In response to just a few cases of travel-related Zika virus, South Carolina blanketed the skies with the pesticide Naled – killing millions of native bees and honey bees.

This kind of sheer irresponsibility poses a grievous threat to the already fragile ecosystems that sustain human life — and have an inherent right to exist. Agribusiness corporations and their partners in government routinely ignore what science tells us, sacrificing human and environmental health on the altar of greed.

Perhaps the exploration of emotional states in bumblebees and other species can help us find our connection with nature again, and help put the brakes on its destruction.