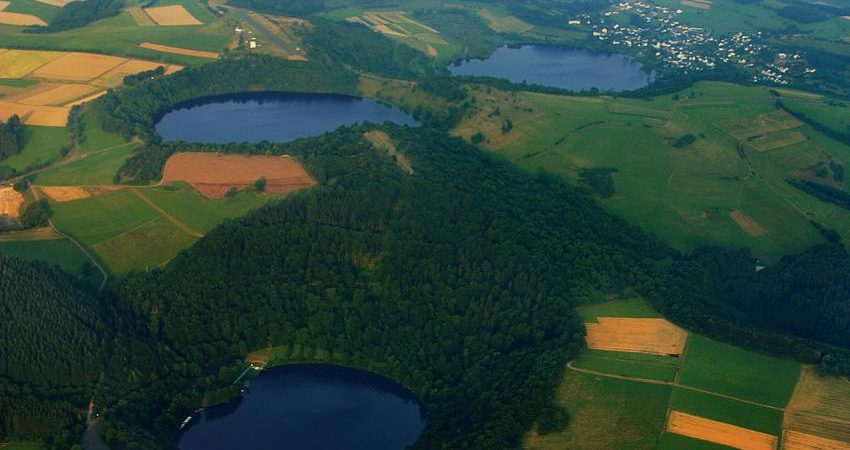 Scientists have discovered new evidence for active volcanism next door to some of the most densely populated areas of Europe. The study ‘crowd-sourced’ GPS monitoring data from antennae across western Europe to track subtle movements in the Earth’s surface, thought to be caused by a rising subsurface mantle plume. The work is published in Geophysical Journal International.

The Eifel region lies roughly between the cities of Aachen, Trier, and Koblenz, in west-central Germany. It is home to many ancient volcanic features, including the circular lakes known as ‘maars‘.

These are the remnants of violent volcanic eruptions, such as the one which created Laacher See, the largest lake in the area. The explosion that created this is thought to have occurred around 13,000 years ago, with a similar explosive power to the cataclysmic Mount Pinatubo eruption in 1991.

The mantle plume that likely fed this ancient activity is thought to still be present, extending up to 400km down into the Earth. However, whether or not it is still active is unknown: “Most scientists had assumed that volcanic activity in the Eifel was a thing of the past,” said Prof. Corné Kreemer, lead author of the new study. “But connecting the dots, it seems clear that something is brewing underneath the heart of northwest Europe.”

In the new study, the team – based at the University of Nevada, Reno and the University of California, Los Angeles in the United States – used data from thousands of commercial and state-owned GPS antennae all over western Europe, to map out how the ground is moving vertically and horizontally as the Earth’s crust is pushed, stretched and sheared.

The research revealed that the region’s land surface is moving upward and outward over a large area centred on the Eifel, and including Luxembourg, eastern Belgium and the southernmost province of the Netherlands, Limburg.

“The Eifel area is the only region in the study where the ground motion appeared significantly greater than expected,” adds Prof. Kreemer. “The results indicate that a rising plume could explain the observed patterns and rate of ground movement.”

The new results complement those of a previous study in Geophysical Journal International that found seismic evidence of magma moving underneath the Laacher See. Both studies point towards the Eifel being an active volcanic system.

The implication of this study is that there may not only be an increased volcanic risk, but also a long-term seismic risk in this part of Europe. The researchers urge caution however: “This does not mean that an explosion or earthquake is imminent, or even possible again in this area. We and other scientists plan to continue monitoring the area using a variety of geophysical and geochemical techniques, in order to better understand and quantify any potential risks.”

Headline image credit and caption:
© Martin Schildgen / Wikimedia Commons
Three water-filled maars in the Eifel, Germany (Gemündener Maar, Weinfelder Maar, Schalkenmehrener Maar). Created by volcanic activity, maars are also found in other parts of Europe and on other continents, but Eifel-Maars are the classic example worldwide.