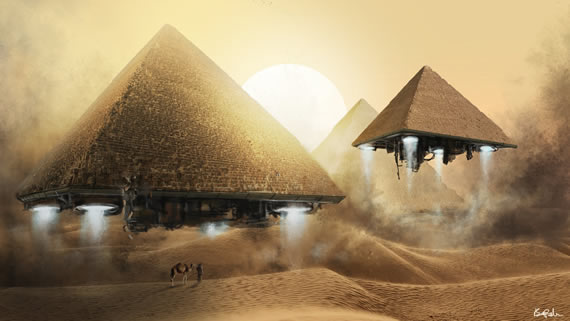 Noah’s ark has always been a mystery , but all this will change , after a new study of the Dead Sea Scrolls, Noah’s Ark revealed to be shaped like a pyramid.

The Dead Sea Scrolls is a collection of texts of religious and historical significance, this texts are written in Hebrew, were discovered between 1946 and 1956, from eleven caves located near the Dead Sea. this texts from the early eras of Christianity and contain the story of Noah’s Ark

The researchers of the Leon Levy Dead Sea Scrolls Digital Library project, using custom-made cameras, scanned tens of thousands of fragments from the scrolls. Based on their studies, the researchers recently announced that the ark of Noah looked more like a pyramid than a boat.

The new reading of the fragments has changed our understanding about Noah’s Ark. Thanks to the high-resolution imagery, a word following the phrase “the ark’s tallness” had previously been illegible. However, the new scans showed that the correct words is ne’esefet, meaning “gathered,” which according to researcher Dr. Alexey Yuditsky, means that the ark’s ribs were gathered together at the top in the shape of a pyramid. Dr Yuditsky said that the Septuagint, a Greek translation of the Bible dating to the third century BC, used a Greek verb with a similar meaning to describe the Ark. Moreover, medieval authors like Maimonides suggested that the ark’s roof was pointed ( via truthworldnews.info ).