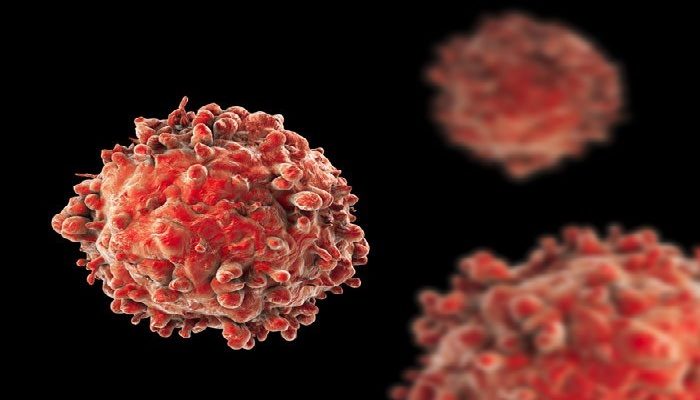 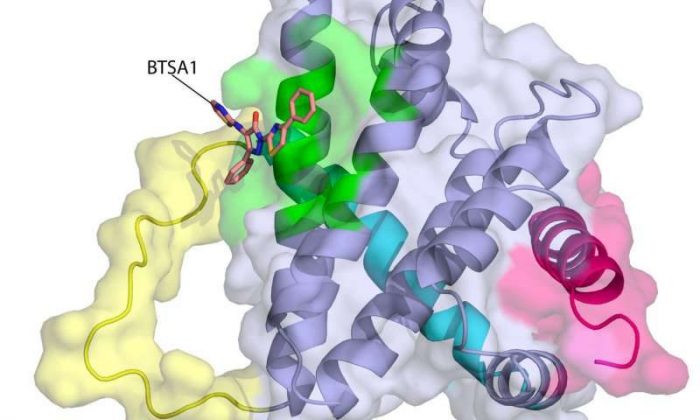 © Albert Einstein College of Medicine
This image depicts the structure of the BAX protein (purple). The activator compound BTSA1 (orange) has bound to the active site of BAX (green), changing the shape of the BAX molecule at several points (shown in yellow, magenta and cyan). BAX, once in its final activated form, can home in on mitochondria and puncture their outer membranes, triggering apoptosis (cell death).

Scientists at Albert Einstein College of Medicine have discovered the first compound that directly makes cancer cells commit suicide while sparing healthy cells. The new treatment approach, described in today’s issue of Cancer Cell, was directed against acute myeloid leukemia (AML) cells but may also have potential for attacking other types of cancers.

“We’re hopeful that the targeted compounds we’re developing will prove more effective than current anti-cancer therapies by directly causing cancer cells to self-destruct,” says Evripidis Gavathiotis, Ph.D., associate professor of biochemistry and of medicine and senior author of the study. “Ideally, our compounds would be combined with other treatments to kill cancer cells faster and more efficiently-and with fewer adverse effects, which are an all-too-common problem with standard chemotherapies.”

AML accounts for nearly one-third of all new leukemia cases and kills more than 10,000 Americans each year. The survival rate for patients has remained at about 30 percent for several decades, so better treatments are urgently needed.

Apoptosis occurs when BAX-the “executioner protein” in cells-is activated by “pro-apoptotic” proteins in the cell. Once activated, BAX molecules home in on and punch lethal holes in mitochondria, the parts of cells that produce energy. But all too often, cancer cells manage to prevent BAX from killing them. They ensure their survival by producing copious amounts of “anti-apoptotic” proteins that suppress BAX and the proteins that activate it.

Dr. Gavathiotis was the lead author of a 2008 paper in Nature that first described the structure and shape of BAX’s activation site. He has since looked for small molecules that can activate BAX strongly enough to overcome cancer cells’ resistance to apoptosis. His team initially used computers to screen more than one million compounds to reveal those with BAX-binding potential. The most promising 500 compounds – many of them newly synthesized by Dr. Gavathiotis’ team-were then evaluated in the laboratory.

Finally, the researchers generated animal models of AML by grafting human AML cells into mice. BTSA1 was given to half the AML mice while the other half served as controls. On average, the BTSA1-treated mice survived significantly longer (55 days) than the control mice (40 days), with 43 percent of BTSA1-treated AML mice alive after 60 days and showing no signs of AML.

Importantly, the mice treated with BTSA1 showed no evidence of toxicity. “BTSA1 activates BAX and causes apoptosis in AML cells while sparing healthy cells and tissues-probably because the cancer cells are primed for apoptosis,” says Dr. Gavathiotis. He notes that his study found that AML cells from patients contained significantly higher BAX levels compared with normal blood cells from healthy people. “With more BAX available in AML cells,” he explained, “even low BTSA1 doses will trigger enough BAX activation to cause apoptotic death, while sparing healthy cells that contain low levels of BAX or none at all.”

Plans call for Dr. Gavathiotis and his team to see whether BTSA1 will show similar effectiveness when tested on animal models of other types of cancer.