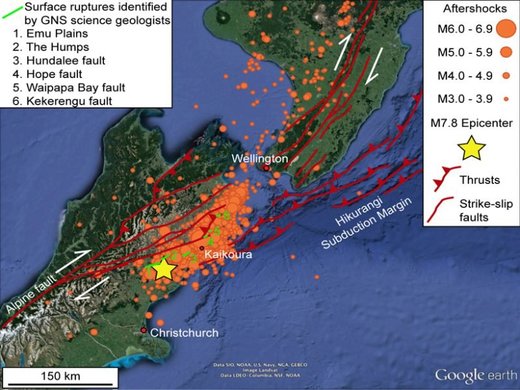 A devastating earthquake has hit New Zealand, but this unusual event, with long duration slip on several faults, will also provide an astounding data set for understanding a complex tectonic region.

New Zealand was rocked by a magnitude 7.8 earthquake on Monday 14th November. This event had unusual aspects of slip distribution, duration, and kinematics, from which we will learn a lot about earthquake mechanics as data are collected. The event that started ~100 km north of Christchurch with displacements less than 1 m, propagated northward, creating the largest surface displacements (so far observed) near the northern termination of the earthquake rupture, at the northeast tip of the South Island.

At this early stage, based on preliminary data released by the New Zealand monitoring partnership GeoNet, I find three properties of the earthquake particularly intriguing:

The large surface displacement at the northern end of the rupture explains why aftershocks are concentrated in the north, and why areas north of the rupture, such as Wellington, experienced more damage than Christchurch, which is closer to but south of the epicenter.

The earthquake adds insight to the discussion of whether an earthquake knows its size when it nucleates – this earthquake started small, and only reached large slip late in its propagation. The USGS estimates the greatest displacements were over 100 km from the epicenter.

Therefore, as suggested in recent findings by Meier et al., there seems to have been no way to expect the large size of this earthquake from its small early slip. The question remains, why did the earthquake start small and get larger?

2. Type and number of faults

The area of the epicenter lies in the Marlborough fault system, known for strike-slip tectonics where crustal blocks slide horizontally. However, coastal uplift associated with this earthquake demands at least a couple of meters of vertical motion, related to collision or subduction, as well as at least 10 m of strike-slip. Mapping of surface displacements has furthermore illuminated slip on as many as six faults.

The earthquake slip lasted longer than the one-minute slip duration typically considered to calculate local magnitudes. Initial reports therefore underestimated the magnitude. The long duration is intriguing; slow propagation is typical of earthquakes originating from the relatively shallow subduction thrust interface, not faults on the continents.

Although this earthquake was not as slow as some ‘tsunami earthquakes’, this may imply rupture in a weak, low rigidity fault zone (e.g., Bilek and Lay). The earthquake occurred in continental crust, but near a transition from continental transpression on the South Island to westward subduction underneath the east coast North Island.

It has been suggested that subducted continental crust below the current strike-slip system is dehydrating, providing fluids that weaken the overlying continental faults. As more data emerge, we will therefore learn a lot about how deformation is transferred from a subduction zone to a strike slip system, – also raising questions of what happens in the Cook Strait, between the two main New Zealand islands (see also Pondard and Barnes).