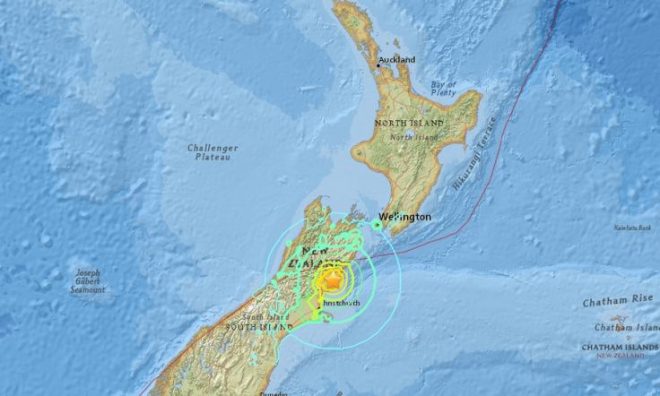 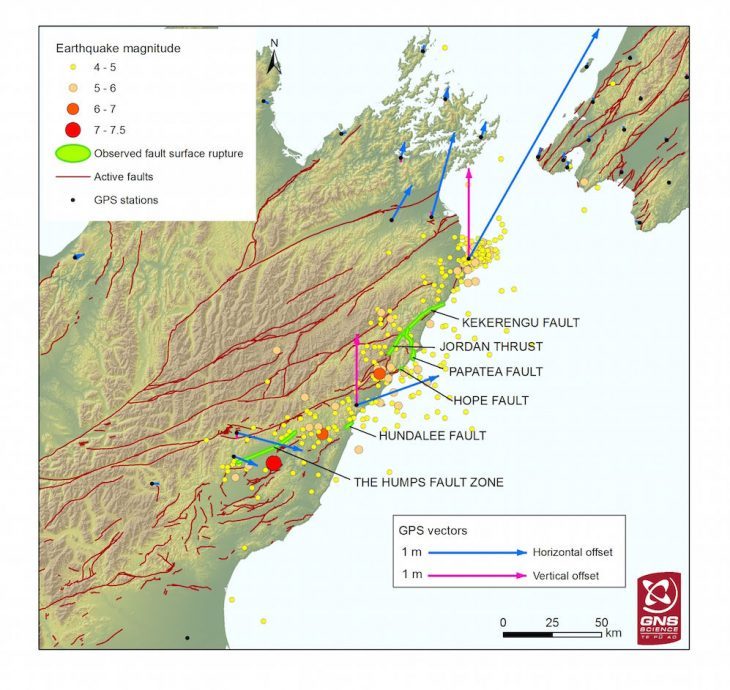 A new map reveals that six faults ruptured during the Nov. 14 Kaikoura earthquake in New Zealand. The magnitude-7.8 quake ruptured at least four faults along the coast, as well as two inland. Arrows show the level of displacement along each of these faults.
Credit: GNS Science

The magnitude-7.8 quake that rattled New Zealand, killing at least two people and stranding thousands of people, completely transformed the underlying faults in the region.

Six major faults ruptured as a result of the New Zealand quake, a new map reveals.

The Kaikoura earthquake struck the South Island of New Zealand early in the morning on Nov. 14 local time, triggering landslides, tsunamis and hundreds of aftershocks. And thousands of people were stranded when earthquake detritus dammed a river. During the quake, bystanders captured images of mysterious earthquake lights painting the sky in eerie blue and green.

To see how the massive temblor reshaped the landscape, Nicola Litchfield, a geologist with the geoscience consultancy group GNS Science in New Zealand, and colleagues flew over the South Island in a helicopter to take video footage of the region.

The team compared before-and-after images of the faults in the area.

It turned out the temblor had dramatically changed the earth beneath.

Four faults along the coastline ruptured and extended out into the sea, while another two faults ruptured inland, closer to the epicenter of the quake, Litchfield said. Ground-based GPS stations also reveal major motion at these faults, she added.

“The whole coast appears to have been uplifted from Cape Campbell all the way south to Kaikoura,” Litchfield told Live Science. “The ones right on the coast appear to have very large movements, almost 1 meter [3.3 feet] up and almost 3 m [10 feet] — by the looks of things — sideways as well.”

Now geologists are scrambling to figure out what this means for earthquake risk in the region.

“It’s a really complicated area and there are a lot of faults here, so the earthquake will have relieved the stress in some places, but unfortunately will have increased the stress in others. That’s what we are desperately trying to figure out now — what might have been loaded up.”

New Zealand sits atop the incredibly complicated Marlborough Fault System, a set of four strike-slip faults (where two plates slide past each other rather than crashing into one another) that lie at the boundary of the Australian and Pacific plates. Farther East in the subduction zone, the Pacific plate is diving beneath the Australian plate, but almost all the locked stress there gets translated into motion along the Marlborough Fault System, Litchfield said.

The next step is to take ships out to send sound waves beneath the water to map the seafloor. By comparing before-and-after seafloor maps, geologists can determine how far offshore the ruptures extend, Litchfield said. That, in turn, will help reveal where faults are newly locked and loaded.

Because the quake is so new, the findings have not yet been published or submitted to a peer-reviewed journal, Litchfield said.