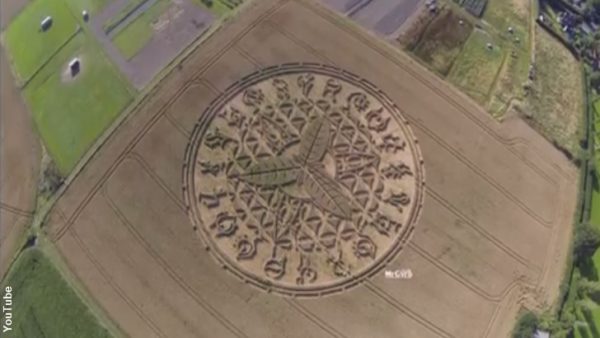 The appearance of crop circles in various areas across the world has baffled and fascinated researchers and laypeople for years. The most intriguing of these unusual formations have a tendency to appear in the United Kingdom and therefore it fits that the latest reported case of a crop circle has appeared in that country. This circle has been described by researchers in this field as one of the most mysterious and impressive that they have ever uncovered. One such researcher, Colin Andrews, wrote on his Facebook; “I’ve traveled the world for over thirty years investigating crop circles and have never seen anything quite as impressive.”

This particular crop circle is said to have appeared on a private farm while the family who lives there were on holiday. They came home to discover the huge crop circle, which spans an area of approximately three hundred feet. The crop circle is carved with some intricate, mysterious symbols which researchers have suggested probably represent twenty astrological symbols. The family claims that they cannot find any evidence of tampering around the periphery of the area and none of their neighbors saw anything peculiar while the family was out of the country.

Richard Dolan, a researcher in this area, has said; “The patterns of the formations themselves have been studied endlessly. Aside from being supremely beautiful, many seem to be messages in one form or another, often with cosmological implications. None seems ominous or evil. If one receives any sense or feeling from them, it is benevolence. If it were to be the case that these formations are created by an extraterrestrial or non-human intelligence, we might conclude that at least one of the groups here might, in fact, care about us and wish to help us.”