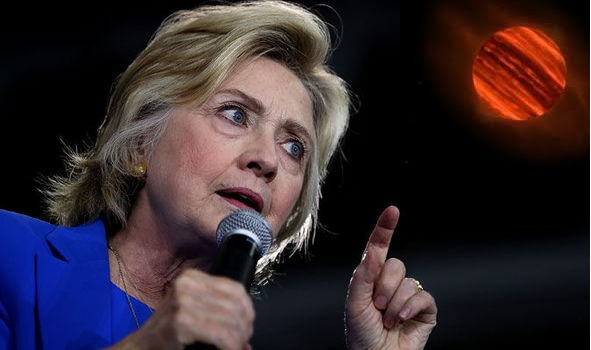 John Podesta is former Chief of Staff to President Bill Clinton and former Counselor to President Obama, is now currently both Chair of the Center for American Progress and Chairman for Hillary Clinton’s 2016 presidential Campaign.

Podesta is already on record stating that his biggest failure of 2014, was not securing the disclosure of the UFO files.

See Part 1 for leaked emails uncovering the War in Space, Cosmic Cultures and the dangers of the Elites activities that impact all of humanity.

I found the following email, warning about Nibiru, while searching through the Podesta Wikileaks archive.

It ends with the following statement:

CATASTROPHES ARE NEEDED FROM WHICH SOULS LEARN.

Subject: TELL HILLARY SHE IS WRONG ON CLIMATE CHANGE —— see below

IS A NEAR-TERM WORLDWIDE CATACLYSM AHEAD ??? (Minds are like parachutes. They only function when they are open!!)

A gigantic hierarchical website of transcribed communications to an American woman, over more than 15 years to date, from benevolent extra-terrestrials, claims that Planet X (or historical Nibiru), four times larger in diameter than Earth and magnetically more than 20 times stronger, is on a long elliptical path now slowly passing between the Sun and Earth — and does so every 3600+ years. The existence of Nibiru and its long orbit was first revealed by the Jewish-American scholar Zecharia Sitchin in his 1976 book “The 12th Planet” and multiple follow-on authored books all based on his Middle-Eastern archeological hieroglyphic interpretations. Nibiru was first spotted remotely by USA astronomers in 1983 and reported at that time in the Washington Post — but since has been subject to a governmental coverup.

It is currently hidden in the Sun’s glare, but distant photo images have been provided on the website and the internet. As it passes closer to Earth with its long tail of moons and asteroids, likely within the next 24-or-so months, the aliens’ website predicts it will cause a drastic Earth pole shift of about ninety degrees, due to its magnetic strength. This would result per the website in more Earth wobble, then violent mega-earthquakes, super-hurricane winds, worldwide volcanic eruptions, and oceanic sloshing with gigantic tidal waves inundating most low-lying coastal areas and cities, e.g., Netherlands, Denmark, Bangladesh, Singapore, Hong Kong, NYC, LA, Miami. Food, water, electricity, and gasoline distribution would collapse resulting in massive relocations, rampant crime, riots and starvation. Much housing would be destroyed. Melting old poles combined with much warmer oceans due to a hotter Earth core, per the aliens, would cause a greater than 600 foot rise in ocean levels in the following two years. In worst case, as little as ten or twenty percent of the world population might survive.

Minor wobbles of the Earth pole positions are occurring per the website. Nibiru’s magnetic strength apparently is already stirring the earth environment and appears to be causing some of the climate change/global warming effects, questionably blamed on atmospheric CO2. Leading up to the shift, near-term, they predict more Japanese mega-quakes, a build-up of Midwest USA quakes from Memphis/New Madrid to Buffalo NY, then an early tsunami inundating low portions of the Netherlands, Denmark, and UK.

TAKING STEPS AHEAD OF TIME WOULD BE CRITICAL AS THE SHIFT WOULD TAKE PLACE WITH LIMITED WARNING. This is likely to happen before 2016 or 2017. Many early indicators are occurring as cited above, but mainly, a second (small blob-like) sun will next become visible in daylight by eyesight — but apparently already visible with multiple moons and trailing dust/rock clouds per select photos (re Nibiru) in the website. There would, according to the alien predictions, be a lean of the North pole leading to three days of darkness for the northern hemisphere. The Internet would begin to malfunction as satellites, oceanic cables fail, as already occurring in the western Pacific. Within four months after the lean, the pole shift would then occur rather suddenly. If this does happen, to survive, food, water, and gasoline especially must be accumulated and stored. And camping equipment with gardening and other tools. Moving far away beforehand, i.e., at least 200 miles and 1000 ft elevation, from low coastal areas would be critical for survival.

Why hasn’t Nibiru’s existence been publicized? Because leaders in major governments know and have suppressed informing, wanting to avoid panic, hoping perhaps that results would be less than predicted. Severity of damages to Earth depend on where Earth is in its solar system orbit relative to the Nibiru passage. Only a select circle of world and USA leaders are informed and preparing. At some point, the various governments will be forced to openly announce its presence. Any first public announcement by USA/NASA leaders is likely to minimize projections in order to minimize reactionary panic.

All this may seem preposterous, but my extended research over the last dozen-plus years into pre-history, abandoned cities archeology, mythology, past geological catastrophes, such as many underwater civilization remnants, provide ample evidence for past pole shifts. Psychic messengers, Mother Mary apparition messages, UFO/alien communications, English crop circle designs, all are providing warnings specifically time-wise to a pole shift about this current period, based on a frequency pattern of every 3600+ years due to a periodic Nibiru flyby. No direct hit with Earth is anticipated.

For a few historical and geological examples:

1) Niagara Falls gorge was created about 3600 years ago per geologists, 2) Simultaneously, larger northern Canada lakes were created, 3) At that time, also an upward thrust of the Andes happened, 4) Greenland ice cores show volcanic ash layer about 1600+ BC, 5) Tree rings in Irish oak logs in peat bogs show growth stop about 1600+ BC, 6) California Bristlecone pine trees show no growth rings about 1600+ BC, 7) Thera/Santorini eruption occurred about 1600+ BC in Mediterranean, Minoan Crete culture inundated, 8) Shang Dynasty China suffered abrupt end about 1600+ BC due to severe events. 9)Alien messages from the Cassiopaean star system date the last shift specifically as the year 1588 BC— plus 2014 = 3602 years, and 10) numerous other geological events e.g., about 11,000 years ago, or 3 times 3600 years, there is worldwide geological evidence of horrendous chaos about the time of the disappearance of Atlantis. Also, 4 times 3600 years is one estimate of the time period for inundation of a continent surrounding Easter Island.

NOW, in the spring of 2014, in spite of potential ridicule, I feel an obligation to alert everyone EARLY about the horrible possibilities to let you decide what if anything you will do to prepare. Look for related news, study, then ACT, or deny and ignore, as you see best for you and those you love.

THIS COULD ALL BE A QUESTIONABLE ALARM, BUT DON’T JUST IGNORE & DENY, SEE FOR YOURSELF AND DECIDE !!! IS IT A HOAX? No!! OR WRONG TIMING? OR OVERESTIMATED IMPACT?

BE CONCERNED FOR OTHERS. FORWARD THIS TO RELATIVES, FRIENDS, MEDIA, ETC. DJSmalter 03/2014 *[email protected]

NOTE: “There have been very highly evolved civilizations on this planet. There have been bodies in space which came too close, which caused chaos and destruction. The civilizations were destroyed because evolvement was in technology and not in spiritual growth. CATASTROPHES ARE NEEDED FROM WHICH SOULS LEARN.”