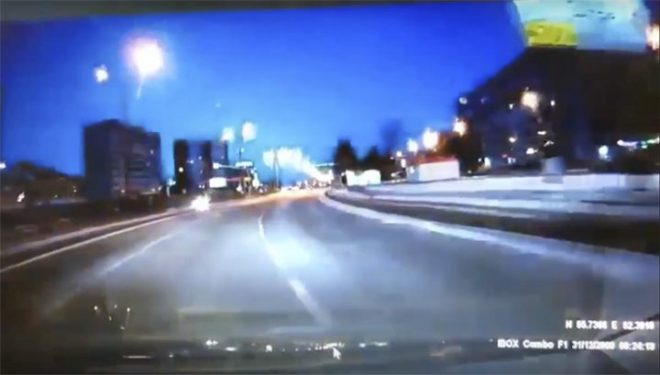 Flash seen over thousands of kilometres but scientists disagree over the cause.

The extraordinary light show – seen here on videos – came on the night of Orthodox Christmas Day this week.

The black sky suddenly turned momentarily deep blue as if on a bright day – but according to some accounts, the earth moved too.

Experts insist the phenomenon was not manmade: there were no reports of missile tests or explosions.

Nor were there reports of meteorites striking the earth.

Witnesses had the feeling something massive had happened – but what?

It was seen and felt by people especially in th three Russian republics – Bashkortostan, Udmurtia, and Tatarstan.

‘It lit the night sky from side to side, making it look brighter than daylight,’ said one account.

Artyom Russkikh said: ‘We saw this while driving.

‘There was a vibration and the sound of explosion in the sky. Awesome.

Firaya Zaripova commented: ‘Probably it was the testing of some military weapon, if even the ground was shaking.’

Yet this was denied.

‘There was also the sound of an explosion and then a vibration, I felt it.’

‘There was also the sound of an explosion and then a vibration, I felt it.’

For Denis Rozenfeld, it was clear: ‘A meteor burned out, not reaching the lower layers of the atmosphere.

‘Before this it exploded and split into many small pieces. That is why there was such a sound, which came to us in a few seconds.

‘It’s a funny coincidence that such a rare phenomenon for our region has happened right on Christmas.’

Spookily, similar phenomenon were reported last year in Kazan, several years ago in Karelia, and in 2006 in Moscow.

Yuri Nefefyev, director of the Engelhardt Astronomical Observatory, sees the origin was atmospheric electricity, saying that this is still something not properly explained by science.

‘There are a huge number of effects linked to atmospheric electricity, many of which are not properly studied because of how rarely they occur,’ he said.

Yet scientists offered completely different versions of what happened.

Some claimed the bright light flash was refracting from low clouds, others that it was a dry thunderstorm. Astronomers from Kazan Federal University insisted there was a space link.

‘This was a bolide, when all substance burns in atmosphere and doesn’t reach Earth,’ said Dr Sergey Golovkin, of the university’s Physics Institute.

‘It is accompanied by a loud bang.

‘It could have been a fragment of a spacecraft that burnt, but normally it takes them more time to enter the atmosphere, thus they can be observed for longer.

‘This was a bolide that burnt in the dense layers of the atmosphere which is why it was seen over such a big territory. We didn’t register the flash because there was strong blizzard on this night.’

Artyom Russkikh said: ‘We saw this while driving.

‘There was a vibration and the sound of explosion in the sky. Awesome.’

He wrote: ‘What was it? A meteor, a rocket from space, UFO, North Korea?’