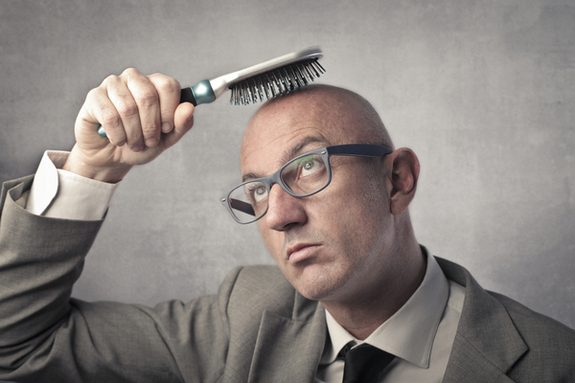 Scientists have made a breakthrough that could eventually help lead to a cure for baldness.

They discovered that in animals individual hairs communicate with each other to form an even covering all over the body, vital for furry creatures to survive in different climates.

But, in humans, that signalling pathway appears to break down in certain areas, such as the front of the scalp and the crown in men, leading to bald patches alongside lush hair growth.

By identifying the mechanism that allows hair to ‘talk’ to each other, the researchers from University of California, Irvine, hope to find a way to restore it in humans to eliminate hair loss and balding.

They also hope to be able to use their discovery to find a way to help those who suffer from too much hair in certain parts of the body, lead researcher Maksim Plikus told the online journal eLife.

Plikus, assistant professor of development and cell biology, worked out the interaction between hair follicles on a system called the ‘Wnt-BMP signals’ along pathways in the body.

A study of mice shows this is how different parts of the body communicate with each other to use proteins to regenerate or regulate hair growth.

Wnt-BMP regulation appears to be ubiquitous in skin across the whole body. For instance, the back can ‘talk’ to the belly so that both areas can grow hair at the same rate.

They compared the process to two neighbouring countries speaking different languages but being able to understand each other through commonly used sentences and words to develop side by side.

However, in humans this signalling appears to break down. For instance, someone lose the hair on their head but be excessively hairy on their arms or chest because follicles are growing independently of each other.

But the discovery of how this works now means the researchers can work on ways to use drugs to restore the communication between Wnt-BMP pathways in humans.

Plikus said: “It was unclear how the back skin ‘talks’ with the belly skin to coordinate the tasks of growing hairs.

“We showed that although different signaling ‘dialects’ may exist between belly and back skin, for instance, all hairs can understand one another through the use of similar ‘words’ and ‘sentences’.

“If communication between nonbalding and balding regions can be reactivated, hair growth signals can then start spreading across the entire head skin, preventing regional baldness.

“Just like scalp skin can show hair growth deficiency, skin in other body sites – such as the face, arms and legs – can often show excessive hair growth that can be cosmetically undesirable.”

He added: “Our study identified the types of Wnt-BMP signaling levels that are very favourable for hair growth and the types that prevent it.