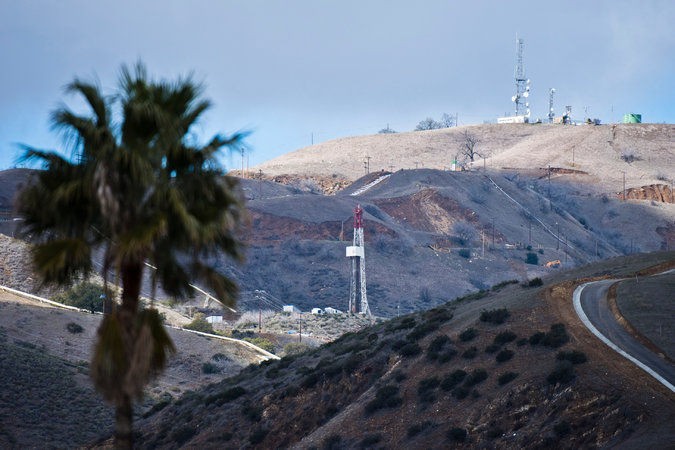 “Yet another huge environmental disaster and yet another huge company that will likely get off scot-free. I feel sorry for the people of California lately, they have the “harmless” levels of fukushima radiation on one side and now this massive methane gas leak oh and not to mention the recent flooding and the ever present threat of the megaquake…GOOD TIMES in the sunny California“.

To the dismay of thousands of residents of Porter Ranch, Calif., whose lives have been upended by a huge natural-gas leak from a nearby well, the local utility says it will take at least another month and a half to shut it down.

Early efforts to halt the leak or kill the well by injecting liquids into it failed because the liquids were not heavy enough to overcome the gas rushing up at nearly 200 times normal atmospheric pressure.

So the utility, the Southern California Gas Company, is now pinning its hope on a relief well, which will allow the liquids to be injected much farther down. Drilling began Dec. 4 and is on schedule to be finished in late February, said Bret Lane, the company’s chief operating officer.

Equipment was in place in November to help stop the flow of natural gas leaking from a storage well at the Southern California Gas Company utility’s Aliso Canyon facility.Governor Declares Emergency Over Los Angeles Gas LeakJAN. 6, 2016
Crew members at work Saturday on a relief well intended to help shut down the leaking oil well in the Gulf of Mexico. They have drilled 10,000 feet below the surface of the gulf since the operation began in the middle of May.A Drill Ship Crew Labors to Sink a Well to Kill a WellJUNE 20, 2010
INCHES-WIDE TARGET The platform for a relief well, which will have to connect with the existing well’s steel casing pipe.BP Aims for a Bull’s-Eye Under the Gulf of MexicoJULY 5, 2010
Experts say a relief well is virtually foolproof, although it is an expensive last-ditch solution for a leaking well. Drilling any well takes time, but drilling one to accurately intercept the narrow steel pipe of a problem well, which in this case is more than a mile and a half underground, takes even longer.

The drilling of two relief wells was undertaken during the oil spill at BP’s Macondo well in the Gulf of Mexico in 2010, for example, and the first was completed in about three months, although by the time it was finished, it was no longer needed to stop the leak.

“This is going to be very similar to the Macondo relief wells,” said John P. Hughett, the president of Hughett Engineering, an oil and gas service company in Dallas that is not involved in the effort.

The Southern California Gas Company’s well, known as Standard Sesnon No. 25, is used to send natural gas from transmission lines down more than 8,500 feet into depleted oil fields at the utility’s Aliso Canyon storage facility near Los Angeles. There, the gas remains until it is needed for power generation and other uses. The No. 25 well began leaking Oct. 23, sending as much as 130,000 pounds of natural gas an hour into the air.

Natural gas consists mostly of methane, which is a potent though relatively short-lived greenhouse gas that contains chemicals added for safety so people can smell it. The smell and the unhealthy side effects of the chemicals, including nosebleeds, headaches and dizziness, have caused several thousand families in Porter Ranch, a community of close to 30,000 about 27 miles northwest of Los Angeles, to leave temporarily.

Residents in California were evacuated from the Porter Ranch neighborhood of Los Angeles and Gov. Jerry Brown declared a state of emergency over a huge natural gas leak. By THE ASSOCIATED PRESS on Publish Date January 7, 2016. Photo by Jonathan

Standard Sesnon No. 25 was drilled in 1953, when the area was producing oil, and was converted to its current use when the oil started running out and the field became a storage facility in the early 1970s. The gas company says it thinks the leak was caused by corrosion in steel tubing, called casing, about 500 feet from the surface.

Mr. Lane said that seven attempts were made to pump heavy liquids into the well from the surface, with the idea that the weight of the column of liquid above the leak would be enough to overcome the pressure of the rising gas. But he said that because of flow problems in the well, technicians were unable to get enough liquid into the area above the leak.

Mr. Lane said that during the last few attempts, the liquid came up around the wellhead at the surface. That raised alarms, because the wellhead must be in good condition to help control pressures when the relief well is finished.

“At this point in time, we do not have any plans for another surface kill attempt,” he said. “My concern right now is the condition of the wellhead.”

Mr. Lane said that planning for a relief well began a couple of weeks after the start of the leak. One problem, he said, is the mountainous terrain, which made it time consuming to level an area for the relief well, about 1,500 feet from the leaking well. The company will also soon start drilling a second relief well, as a backup in case the first one is unsuccessful.

The first relief well is about 6,000 feet deep, or about 2,500 feet from its intended depth. It is being drilled parallel to, and about 20 feet from the existing well.

The drillers use a technique called directional drilling, involving a special bit and other equipment that allows the well to be drilled in precise directions, straight or curved, to eventually intersect with the existing well. They use other instruments and a technique called magnetic ranging to home in on the leaking well’s pipe, which is less than a foot in diameter at the bottom.

The magnetic ranging technology detects magnetic fields from the steel pipe of the existing well, and is one reason drilling a relief well takes so long. Before the ranging instruments can be used, the entire length of drilling pipe must usually be removed from the relief well, a process that can take hours. Use of the technology occurs about every 400 feet, Mr. Lane said, but as the relief well nears its target and the need for accuracy becomes more critical, ranging may have to be performed after every 20 feet.

Once the relief well intercepts No. 25, Mr. Lane said, the plan is to send another device down the relief well that will cut a hole in the problem well’s pipe. That will allow heavy mud and liquids to be sent down through the relief well and into the existing well in sufficient quantity to shut the well down permanently.