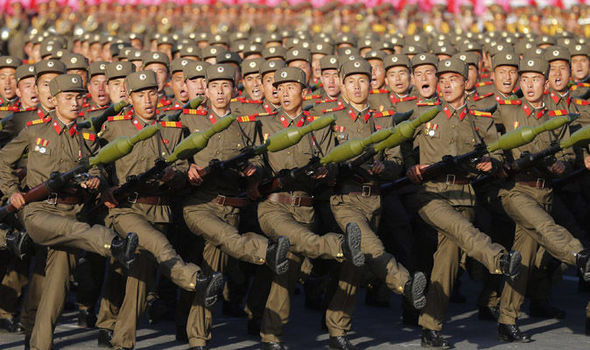 ‘NOBODY Can Stop Us!’ Kim Jong-un Says North Korea Can Now Strike US Mainland

NORTH Korean despot Kim Jong-un has warned NOBODY can stop his country – and said he is now capable of striking the US with nuclear weapons.

A fiery editorial in a state-run propaganda newspaper said North Korea would “reduce to ashes” any enemy – including the USA.

The sabre-rattling opinion piece said “no force on earth” could stop the despot in his question for nuclear domination.

The piece said: “The DPRK is capable of putting the US mainland and any cesspool of evils on earth within the range of its strikes and reducing them to ashes by tipping new-type inter-continental ballistic rockets with more powerful nuclear warheads.

“The DPRK’s strategic position has reached its highest level. No force on earth can block the DPRK’s advance. Neither sanctions nor blockade nor military pressure can ever frighten it.”

The North Korean propaganda rag claimed it had won a vital showdown with the US and celebrated its recent controversial missile tests.

It said: “The DPRK has made its winning streaks in the showdown with the US which challenged the cause of global independence while styling itself an emperor in the world this year.

“The DPRK dealt a telling blow at the US engrossed in nuclear threat and blackmail against it through its H-bomb test and demonstrated to the world the dignity and spirit of Songun Korea.

“The test-fire of SLBM was conducted to prove that the DPRK is the military power possessed of strong nuclear attack capability and the U.S. mainland and the Pacific operational theatre are within the range of strikes of the DPRK.”

The piece concluded by warning the world North Korea had now caught up with the rest of the world when it came to nuclear war.

It said: “The scientists and technicians of the Institute of Nuclear Weapons of the DPRK conducted the nuclear explosion test for judging the power of the newly studied and manufactured nuclear warhead in September.

“The world was stunned by the eye-opening event in which the DPRK passed through the final gate for completing the nuclear force after having everything in place.”