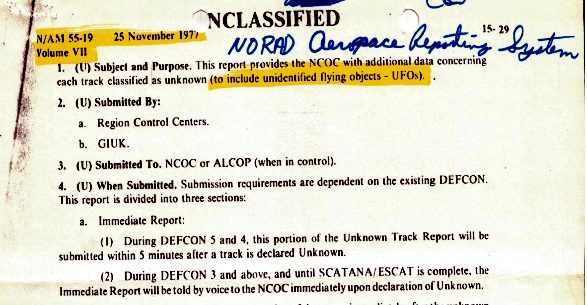 In a series of recently declassified memos and operations manuals, an interesting dichotomy has emerged. The North American Aerospace Defence Command (NORAD) seems to have been caught in a lie. Publicly and officially, NORAD does not investigate or have any interest in the UFO phenomenon. Yet, in a collection of documents unearthed by researcher Paul Dean, the top secret reality is very different; NORAD’s collection of UFO data is thorough and goes directly to their top brass.

NORAD is a joint American and Canadian military organization tasked with the defense of North American airspace. In simple terms, they use a multitude of complex radar and satellite systems to maintain a constant eye on the skies. This live aerospace picture, which even goes up into space, is designed to track everything flying above the United States and Canada. While the official mission of NORAD is to focus on the defence of sovereignty, UFO researcher Paul Dean has uncovered several documents, the mandates of which are to also keep track of unknown objects which occasionally seem to show up on NORAD’s aerospace tracking infrastructure.

I interviewed Dean in regards to his extensive knowledge concerning NORAD, and their “unofficial” stance on UFOs. According to Dean, the standard line being towed by the branches of the military, and NORAD itself is that UFOs are not investigated. Since the closing of Project Blue Book in 1970, UFOs have not been of any interest to any government agency. Dean stated that,

NORAD has generally maintained that the only ‘UFOs’ they detect and track are simply strayed aircraft, hostile formations of Russian combat aircraft and such.

The declassified documents suggest that this may not always be the case.

Dean provided me copies of the documents, as well as some background on the nature of their purpose. He highlighted one particular procedures manual called the Communications Instructions for Reporting Vital Intelligence Sightings. The document instructs personnel on what and how to report incoming air, land and sea vehicles to their superiors. The list of objects is pretty typical; aircraft, missiles, submarines, boats. Section C of the list, however, plainly states ‘Unidentified Flying Objects.’

Dean was quick to point out that,

‘Unidentified Flying Objects’ is listed as distinct from single aircraft, formations of aircraft, missiles, and the rest.

This begs the question; if all UFOs are simply conventional aircraft that are misidentified, wouldn’t they be listed under the standard aircraft section?

Dean also explained that these reporting documents are sent directly to the Commander-in-Chief of NORAD. So if NORAD is not interested in UFOs, why is the officer in charge of the whole program allowing themselves to be bothered with UFO reports?

Even more interesting is a radar tracking manual for operators, known as NORAD/ADCOM Manual 55–19, Vol. VII, Aerospace Reporting System. The manual’s purpose is to provide instructions to regional control centres on a system called ‘OPREP-3.’ In a section titled, Identification of Air Traffic, the manual goes on to explain how unknown radar tracks should be handled, and who they should be sent to.

1 (U) Subject and Purpose. This report provides the NCOC with additional data concerning each track classified as unknown (to include unidentified flying objects – UFOs) 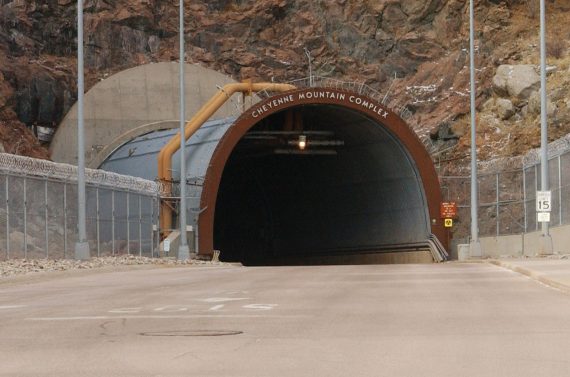 The document goes on to explain the rates at which this data needs to be transferred to the NCOC depending on the defence readiness condition (DEFCON) level NORAD is at any given time. The more extreme the DEFCON, the faster the unknown radar data needs to be sent to the NCOC. This makes sense. Dean explained that the NCOC stands for the NORAD Combat Operations Center, which is in Colorado. It is essentially the central nervous system for the entire organization; all regional NORAD bases report to it, and it issues commands to the regional stations. Dean finds this document interesting because,

It is still rather extraordinary to see the phrase ‘unidentified flying objects – UFOs’ mentioned so distinctly.

Even more interesting is that all regional NORAD stations must report unknown radar tracks, UFOs included, to the NCOC. Again, if UFOs are not taken seriously by NORAD officially, why submit this data to NORAD’s command center? Dean points to another document discovered by his colleague, Canadian UFO writer, Palmiro Campagna. This particular memo from 1988 directs NORAD personnel to no longer send UFO reports to National Defence Operations Centre in Ottawa, Canada. Instead, it provides the appropriate in-house agencies that need this information. It states that unknown object reports are to be sent to the following: “Air Command Operations Centre Winnipeg, NORAD Cheyenne Mtn Complex CO/J3Y, and FGHQ North Bay/SSO Int.”

Dean explained that these regional centres are of key importance to the NORAD defence structure. The first one located in Winnipeg, Canada answers directly to NORAD headquarters. It is near the geographic centre of North America, is in command of two other regional bases in Alaska and Florida, and can scramble fighter jets to intercept targets within minutes anywhere on the continent. The second on the list is in Colorado, and is literally the building which houses the men and women who directly control all NORAD operations. The final center is the Canadian regional NORAD headquarters, but more importantly, home to NORAD’s Special Security Office which is tasked with aerospace flight control and surveillance. Dean explained,

…and the ‘Int’ always stands for Intelligence.

To sum up, all UFO radar and observational reports go to four places. They go to the Canadian and American NORAD headquarters, NORAD’s NCOC, to NORAD’s center in Winnipeg which is tasked with scrambling defensive and offensive fighters to engage inbound targets, and NORAD’s in-house surveillance and intelligence branch. This is not some simple “UFO desk” hiding in the back corner of some out of the way government building; these four NORAD centers are the primary defence structures for all of North America. 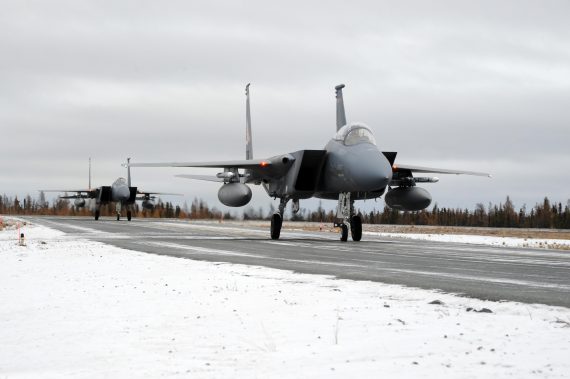 Air Command Ops in Winnipeg, Canada can scramble fighter jets to intercept any target over North America within a couple of minutes.

Clearly military organizations are looking into the UFO situation. While these documents do not provide a smoking gun in relation to evidence for UFOs, they do clearly indicate that the government and military are very interested in them. UFO evidence has been nothing short of elusive, but for Dean, these documents do suggest something odd is going on. While the military probably doesn’t have any alien bodies locked up in any freezers, they do seem very interested in the unidentified objects that occasionally show up in our airspace.