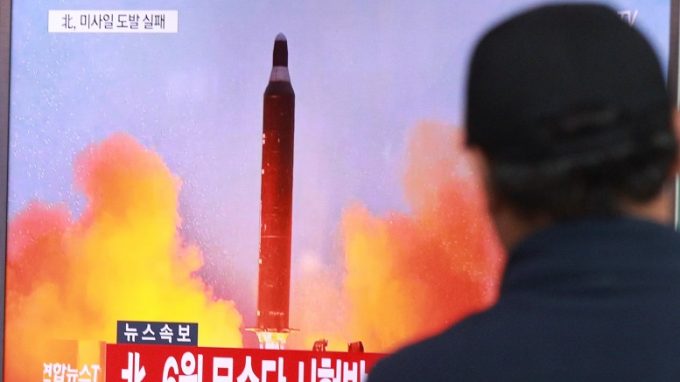 North Korea Now Has an ICBM Capable of Reaching US Mainland

North Korea is now in possession of a nuclear intercontinental ballistic missile that can reach the US mainland, according to a senior US military official.

North Korea has developed an ICBM capable of delivering a nuclear payload to the US mainland, according to an anonymous US military official, who spoke with DefenseTech.com on conditions of anonymity. However, they have not yet solved a key thermal insulation problem, which means their warhead would burn up as it reenters the atmosphere over its target.

Still, “[i]t’s the threat that keeps me awake at night,” DefenseTech quotes the official saying. Earlier this year North Korea claimed it developed a new mobile ICBM called KN-14, and later displayed it on a military parade in October. Pyongyang also claimed that month that it successfully tested heat insulation materials for the missile, but the US official could not confirm that this technology is already in use.

According to the official, the United States takes the North Korean threat seriously enough to transfer some of the “authority to counter weapons of mass destruction” from US Strategic Command to the Joint Special Operations Command.

There is almost no data available about the KN-14 capabilities, Russian defense analyst Vladimir Khrustalev wrote in Lenta.ru in October. However, most experts agree that North Korea’s claims have a somewhat solid basis. “The most conservative estimates place its maximum theoretical range with a nuclear payload at 5,500-6,500 kilometers, with some saying that it could travel as far as 12,000,” Khrustalev wrote.

The North Korean missile program might become a problem for new US President Donald Trump, according to General Curtis M. Scaparrotti, a former commander of US Forces-Korea and now the supreme allied commander of NATO. He speculated that Trump will have to seriously consider a preemptive strike on North Korea before the Koreans launch their nuclear missile.

“There is a rather ambitious space program,” Khrustalev said. “Analysts have often dismissed it as a fantasy, but reality begs to differ.”

Could it be that it is North Korea’s space program that actually concerns the United States? This cannot be excluded, judging by the sentiments of another former commander of US Forces-Korea, General Walter Sharp.

Sharp believes the US must destroy any Korean missile on a launch pad, because the US cannot know for sure whether the missile would carry a satellite or nuclear warhead. Such an aggressive stance is interesting, considering a single ICBM should not be a real problem to the much-advertised US missile defenses, including THAAD in South Korea and Aegis, which can be installed on US military ships across the Pacific Ocean, if these systems are actually able to live up to their reputation.