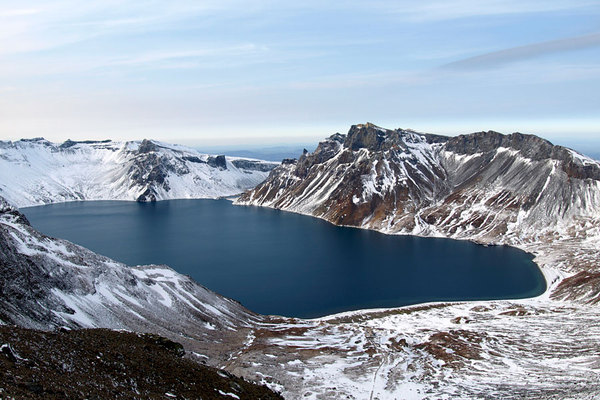 An unprecedented scientific collaboration is investigating a massive volcano that stretches across the border of China and North Korea.

Take, for example, Mount Paektu, which sits on the border of North Korea and China. This massive volcano, called Changbaishan in China, erupted in one of the biggest, most violent eruptions in human history.

And recently it rumbled again.

These new tremors have prompted an unprecedented international scientific study of the mountain. A team of Western, Chinese, and North Korean scientists deployed six seismometers on the North Korean side of the volcano for the first time, in an effort to better understand the rocky beast. The team jointly published their first paper Friday in the journal Science Advances, describing the never-before-studied structures beneath the North Korean side.

“To understand a volcano, you need to look at it from all sides,” says study co-author James Hammond, a seismologist at Birkbeck College, University of London, in a phone interview with The Christian Science Monitor.

“It’s the first glimpse of the volcano on the Korean side. It gives us a much better picture of what’s going on beneath the volcano.”

When Mt. Paektu violently erupted in 946 AD, it flung hot rocks and debris hundreds of miles. Volcanic ash even reached Japan. Dubbed the “Millennium Eruption,” the explosion could be rated a 7 on the Volcanic Explosivity Index. For reference, anything that rates as 8 or over is a supervolcanic explosion certain to cause worldwide devastation.

So it’s no surprise that when the 9,000-foot mountain trembled a little bit between 2002 and 2005, officials decided it was time to learn more about what makes the massive volcano tick. More surprisingly, North Korean officials invited volcanologists from China and Britain to the secluded nation.

As R. Laurence Davis, a geologist at the University of New Haven in Connecticut who was not part of this project, says, “The Earth itself doesn’t pay any attention to borders. It does what it does.”

In 2011, British researchers entered North Korea, officially called the Democratic People’s Republic of Korea (DPRK), to meet with researchers and check out the volcano. That visit kicked off the international collaboration.

But the team couldn’t reconvene on the mountain until 2013 because of international sanctions and the convoluted process of obtaining the proper licenses for importing equipment. The researchers initially planned to bring a range of technology to the Korean side of the mountain, but they had to ditch one device that can be used by the military to detect submarines.

Finally, the team was allowed to install six seismometers in a line on the mountain. Those devices stayed in place for two years, recording motion deep in the Earth that revealed the structures beneath the volcano.

When earthquakes shake the ground, they unleash seismic waves that penetrate differently through different rocks, so researchers can determine rock compositions deep below the surface of the Earth just by looking how waves move through them.

And it turns out the rocks below Mt. Paektu aren’t completely solid. “We definitely see a significant region of partial melt in the crust directly beneath the volcano,” Dr. Hammond says.

But just because some gooey rocks are hanging out underground doesn’t mean the volcano will erupt just yet, Hammond cautions. Researchers are still determining how much magma is down there and exactly how it fits into the plumbing of the volcano.

Mt. Paektu is very mysterious, says Hammond. “We don’t even know why the volcano is there.”

While most volcanoes appear on the boundary of tectonic plates, this one appears to be an anomaly.

Mt. Paektu is more than just a volcano to the North Koreans. The highest point on the Korean peninsula, it’s also considered the “sacred mountain of the revolution,” reported The Telegraph.

The researchers’ next step is to investigate the history of this volcano, beyond the Millenium Eruption. The characteristics and frequency of previous eruptions could help scientists predict future eruptions and how severe they might be.