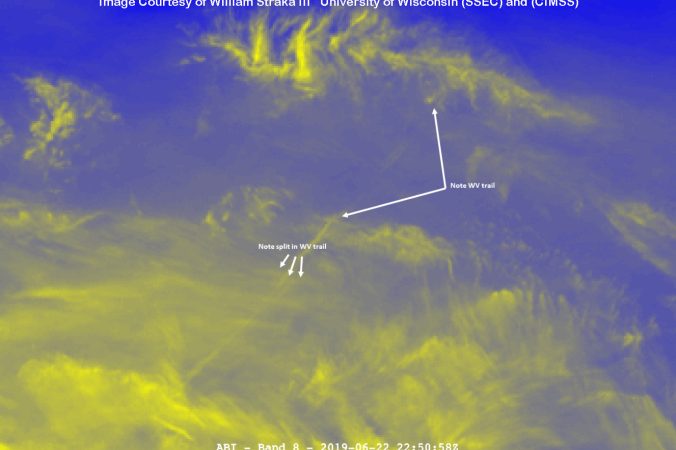 Nuke Sensor Detected Asteroid Explosion in the Atmosphere over the Caribbean

On June 22nd at 21:25 UT, a small asteroid entered Earth’s atmosphere and exploded in broad daylight south of Puerto Rico. Airwaves recorded by the Comprehensive Nuclear Test Ban Treaty Organization’s infrasound station in Bermuda pegged the blast energy between 3 and 5 kilotons of TNT-a fraction of a WW II atomic bomb. The explosion was clearly visible in images from NOAA’s GOES-16 weather satellite:

Meteor expert Peter Brown of the University of Western Ontario says the infrasound signal is consistent with a “small multi-meter sized near-Earth asteroid.” According to data compiled by NASA’s Center for Near Earth Object Studies, asteroids of this size and energy hit Earth’s atmosphere about once a year. That means it’s rare-but not exceptionally so.

The asteroid fragmented as it ripped through the atmosphere. This infrared image from the GOES-16 satellite shows the space rock splitting into at least 3 pieces: 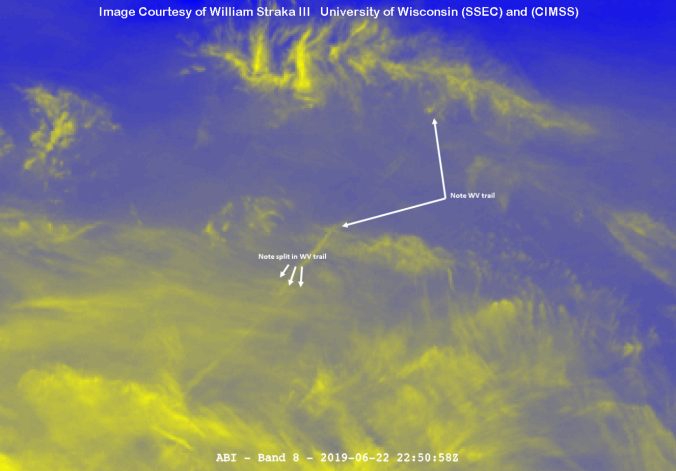 Many more fragments undoubtedly sprayed from the explosion, but the resulting meteorites are now at the bottom of the Caribbean or (in the case of dust-sized debris) floating on the sea surface. Samples would be very difficult to recover.

Earth is currently approaching the Taurid Swarm–a stream of rocky debris associated with the Tunguska Impact of 1908. Astronomers are eager for the close encounter, which begins in late June, so they can peer inside the swarm in search of dangerous asteroids. This fireball, however, is not a Taurid.

“Based on a preliminary orbit for the fireball, it does not appear to be part of the Taurid swarm,” says Paul Weigert of the University of Western Ontario. “Its orbit is typical of near-Earth asteroids which have escaped from the asteroid belt.”

UPDATE: This asteroid may have been discovered shortly before it struck by an Atlas Project Survey telescope: more.