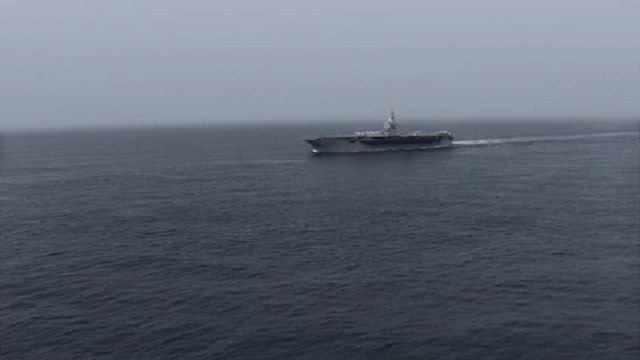 Former USS Nimitz officers claim that ‘unknown individuals’ ordered them to hand over all the recordings.

One of the most intriguing new UFO cases to have come to light in recent years, the USS Nimitz incident, which occurred in 2004 during a training exercise approximately 100 miles from San Diego, saw US fighter pilots from the Nimitz Carrier Strike Group encounter an unidentified flying object.

Footage of the UFO was later published in 2017 and subsequently confirmed to be genuine.

But given the circumstances, should there not have been a great deal more evidence ?

Now a growing number of veterans who had served aboard the fleet at the time have described how mysterious individuals had shown up to prevent any such evidence from getting out.

One of the men, Gary Voorhis, recalled how two ‘unknown individuals’ had turned up on the USS Princeton.

“These two guys show up on a helicopter, which wasn’t uncommon, but shortly after they arrived, maybe 20 minutes, I was told by my chain of command to turn over all the data recordings for the AEGIS system,” he said.

Another officer, P.J. Hughes, was asked by his commanding officer to hand over all the recently secured hard drives from the E-2 Hawkeye early warning aircraft.

“[The men] were not on the ship earlier, and I didn’t see them come on,” he said. “We put [the drives] in the bags, he took them, then he and the two anonymous officers left.”

Cmdr. David Fravor, who was one of the pilots involved in intercepting the UFO, previously reported that he had obtained tapes of the encounter which later disappeared from his locker.

Someone must have been very keen to ensure that details of the incident were kept under wraps.

Whoever they were, they must have believed that the ‘Tic-Tac’ UFO was a secret worth hiding.