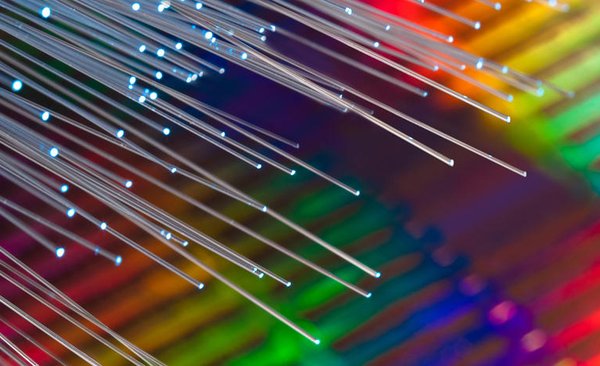 British physicists have made a breakthrough that brings the holy grail of ‘silicon photonics’ much closer. Cathal O’Connell reports.

If you’re lucky enough to have a broadband connection by fibre optic cable, you already know about the speed of photonics – using light, not electric current, to send information.

But while optical fibres use light to give us superfast internet, the data inside our computers still shuffles about on plain old copper wiring. This electronic bottleneck is not only slowing down our devices, it is inefficient, and responsible for 80% of computing energy being wasted as heat.

To get round this, the industry’s biggest players, including Intel, IBM and HP, have been chasing the new ideal of “silicon photonics”, that would use the principles of optic fibre but inside our devices.

The problem is we haven’t been able to integrate tiny lasers onto silicon chips.

But, with new work published in Nature Photonics today, things may be about to change.

A team of British physicists have created the first reliable and efficient laser grown directly on a silicon chip that could work for up to 11 years – 20 times longer than the previous record holder for an on-chip laser.

It’s a “fundamental step towards silicon photonics”, says Professor Peter Smowton, a physicist at Cardiff University. The technology “will clearly transform computing and the digital economy, revolutionise healthcare through patient monitoring, and provide a step-change in energy efficiency,” he says.

In traditional electronics, information is processed and transmitted via electrical currents.

But in photonics, pulses of light are sent instead.

The key point is that light can carry far more data faster than electrons.

Because it can be pulsed at higher frequencies than electric currents, light has a “high bandwidth”, meaning you can cram in more information.

For example, at the chip-to chip scale light can carry 20 times more data, while using much less energy.

So why haven’t we made the upgrade to silicon photonics already?

The problem is silicon itself is no good for making lasers. And while we can make lasers from other materials, these don’t grow well on silicon – or else are liable to fail they when the device heats up.

To solve this problem, Smowton and colleagues have instead made lasers from tiny crystals, each just 20 nanometres wide, grown directly onto the silicon chip.

Applying an electric pulse to the crystals causes them to pump out infrared light.

Silicon is as transparent to the infrared as glass is to visible light, making it the ideal wavelength to build optical connections.

The new lasers are also impervious to temperatures up to 120 °C — meaning they’re suitable for the hothouse world inside a computer processor.

The next step will be to hook up the lasers to optical pathways needed to transmit information between chips.

Now that’s what you could call a cool solution.