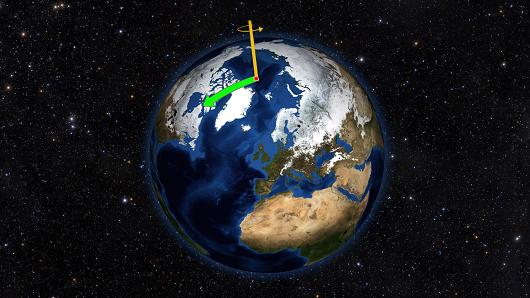 Earth does not always spin on an axis running through its poles. Instead, it wobbles irregularly over time, drifting toward North America throughout most of the 20th Century (green arrow). That direction has changed drastically due to changes in water mass on Earth.

Droughts are causing Earth to wobble on its axis, according to new research.

Scientists have long known that the axis on which the planet spins is prone to wavering, but some of the reasons have escaped understanding. 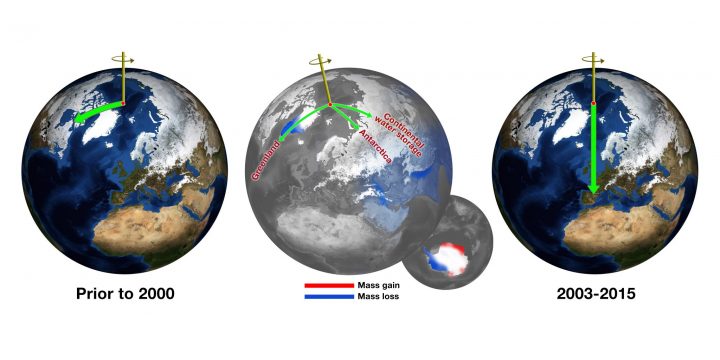 But researchers at NASA’s Jet Propulsion Laboratory say droughts and heavy periods of rain in different places around the planet are causing Earth to shake in space.

“We are going through this massive global-scale climate change, to such a degree that the change in climate has been strong enough to affect the rotation of such a giant planet,” said study co-author Surendra Adhikari of NASA’s Jet Propulsion Laboratory in Pasadena, California.

Since 2000, the Earth’s axis has jumped eastward by about 7 inches a year, a “massive swing,” Adhikari said. Another pattern of wobbling that occurs every six to 14 years has been vexing scientists for more than a century. The researchers examined both in their study.

The movements of the Earth’s axis are crucial to understand, since they affect the performance of satellites and global positioning systems. The polar axis also could become a powerful indicator for scientists studying climate change, Adhikari said.

The team published its findings in the peer-reviewed open access journal Science Advances.

Scientists have thought the melting and forming of ice sheets around the world changed the distribution of mass around the planet enough to shift the polar axis.

And indeed they do, Adhikari said. The Greenland and Antarctic ice sheets are responsible for most of the force pulling and pushing the polar axis.

But Adhikari and Erik Ivins, both researchers at NASA’s Jet Propulsion Laboratory, charted the maximum impact these kinds of changes could have on the movement of the axis and determined there had to be some other force at work.

Examining images from the GRACE satellite, Adhikari and Ivins found that changes in the amount of water on land corresponds to the shifts in the axis. Just as ice piling up adds mass to an area, so does water accumulating in lakes, reservoirs, or aquifers, pushing the axis away from an area.

And as continents dry out during periods without water, they lose mass, which pulls the axis toward them.

“Imagine we have a perfect sphere that is rotating on an axis,” Adhikari said. “If you remove a chunk of material from any location of that idealized sphere, then you are perturbing the system, and the axis tends to head toward the location where you lose the mass.”

Effects from droughts or wet seasons are responsible for about 25 percent to 30 percent of the force pushing and pulling the polar axis. The movement is small — a few inches a year — but it can have serious effects.

“This delicate motion of the pole has to be taken into account to get accurate results from GPS, for example,” Adhikari said.