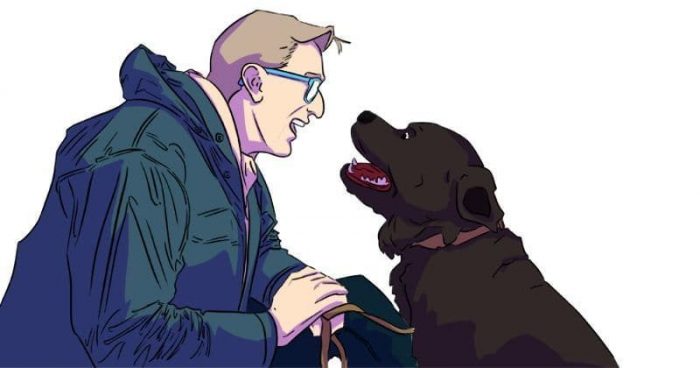 People Who Anthropomorphize are More Intelligent Than Those Who Don’t

Your habit of talking to your pets, plants or any inanimate object, for that matter, is a sign of intelligence, not stupidity.

Pet owners around the globe, if not all then most of them, have daily conversations with their pets, how they’d talk to normal human beings. They wish their pets good morning, ask them if they’re hungry and if they wish to go for a walk, almost as if their pets are understanding them and will talk back any second now.

Do you talk to your pets like you talk to your friends? Be it a dog, cat, parrot or a guinea pig. If so, we’re sure you’ve heard things like “Are you nuts?”, “You’ve gone cuckoo” and seen people get weirded out by your behavior.

Maybe you, too, sometimes wonder why you are the way you are. Why you prefer the company of your pets more than humans. Have you really gone cuckoo?

But, what if we tell you that your habit of talking to your pets, plants or any inanimate object, for that matter, is a sign of intelligence, rather than stupidity? You’re not a crazy cat lady, you’re just smart. The act is called anthropomorphizing, which is, the attribution of human traits, emotions, or intentions to non-human entities.

To quote Nicholas Epley, a professor of behavioral science at the University of Chicago, – “Historically, anthropomorphizing has been treated as a sign of childishness or stupidity, but it’s actually a natural byproduct of the tendency that makes humans uniquely smart on this planet,”

The ability to perceive non-human things as a human is called anthropomorphism. Usually, when kids do it, we find it cute but when adults do it, it’s frowned upon and seen as something weird. Anthropologist experts believe that seeing human traits in a non-human thing or an object, is actually a sign of intelligence.

According to a study conducted in Harvard, in 2011, A group of people was shown pictures of baby animals and adult animals, to which most of the subjects chose the baby animals, and agreed that they would give them human names and would refer to them while using proper gender terms.

Not only that, if they could own a baby animal, they would name him and talk to him, like they talk to humans. No other living being beside humans has such an ability to identify human behavior in inanimate objects.

Even though naming your pets and inanimate objects are the most popular way of anthropomorphizing, it’s not the only one. Giving your pets character traits, like humans, also comes under anthropomorphism. Calling your dog your “baby”, your cat as a “grumpy old man” isn’t you being weird, it’s the intelligence talking.

Human brains are complicated beyond anyone’s explanation. Years of research and scientific studies, yet, we still are not sure what all our mind is capable of. Trying to find human characteristics in inanimate objects such as cars, pens, toys or anything at all is a sign of your brain’s creativity.

Anthropomorphism not only affects humans, it also affects our pets. Studies have shown that, if you keep talking to your dogs, they learn to differentiate between words and learn your gestures. These animals have been human companions for years and have evolved accordingly.

When you talk to your dogs, they can understand your words and the emotions situated with them. Cats, however, don’t understand your words, as much as dogs do, but they too have the ability to recognize their owner’s voice and commands. In fact cats use over 16 different ways to communicate. (They do hear you, they just don’t care).

There are three primal reasons why humans try to anthropomorphize an object: The inanimate object looks like it has a face, we’d like to be friends with it, or we can’t explain its unpredictable behavior and we’re curious. By understanding how each of these triggers works, we can understand why this tendency is both essential to human survival and intelligence.

Our brain gets confused when it sees an object with eyes and tries to perceive it as human. Put toy eyes on a fridge and you’ll want to talk to it, or at least name it! No, you’re not a delusional psycho, it’s basic science and as social animals, we wish to talk to everybody we can and befriend them, it’s in our nature.

To summarize, talking to your pets is very normal and natural, there’s nothing wrong with you. If anything, you’re smarter than those who do not talk to their pets as their brains aren’t functioning how they normally should!

Next time somebody calls you a weirdo when they see you talking to a dog on a street, tell them to get their facts straight.