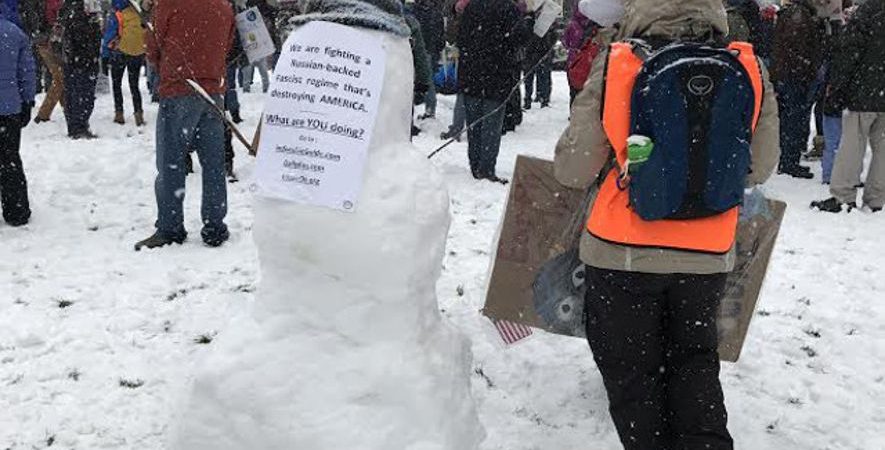 At least one of the People’s Climate March rallies scheduled for Saturday in Colorado was cancelled as a result of a major snowstorm, providing climate skeptics with a good chuckle.

The Colorado Springs march, one of 12 slated to take place in Colorado, was canceled late Friday after heavy snow began falling across the Front Range, with more than a foot accumulating in some areas, as reported by Western Wire.

“Sometimes Mother Nature throws you a curveball!” said the Colorado Springs Council for Justice in a Friday post 350 Colorado Springs. “We know we aren’t in the business of risking anyone’s safety. Dangerous conditions and wet heavy snow in the forecast for tomorrow.”

More than 100 marchers braved the cold at a rally Saturday at Civic Center Park in Denver, where the snow was so heavy that someone was able to build a snowman, as shown in photos posted online.

The website Complete Colorado ran a photo of a man on skis with the headline, “Heading to the Global Warming Rally Today.”

The National Weather Service forecast six to 12 inches of snow, but the Denver metro area could see up to two feet.

In Washington, D.C., the weather was more in line with the marchers’ global-warming message, with temperatures expected to hit 91 degrees.

The People’s Climate March, sponsored by labor unions, environmental organizations and social-justice groups, is aimed at protesting the Trump administration on a host of topics, including climate change, social justice and the so-called “travel ban.”

The Washington, D.C., event, which comes a week after the similarly climate-themed March for Science, featured a number of Democratic lawmakers, including Sens. Sheldon Whitehouse of Rhode Island and Maria Cantwell of Washington.

“Let’s get out there, let’s raise our voices, let’s make sure no one is standing above the law and we are all standing up for our planet and humankind,” said Ms. Healey on Twitter.