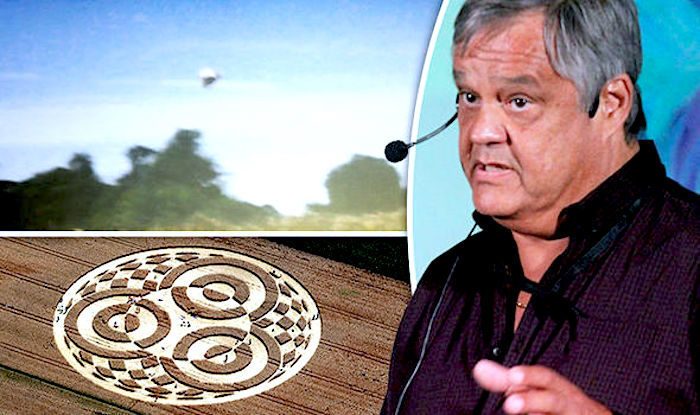 A crop circle “expert” claims the mysterious corn field formations could be caused by aliens or other paranormal forces after allegedly filming a series of UFOs over the baffling creations. Pierre Beake insists he captured these pictures of UFOs hovering over or near crop circles. Mr Beake, who travels from France to the south west of England each year to study the phenomena, also claims to have photographed strange lights and orbs within west country crop formations.

Crop circles – allegedly made by landing UFOs – have been widely considered one of the world’s biggest paranormal hoaxes since 1991, when Doug Bower and David Chorley were filmed showing how they made many of the reported corn field patterns discovered across the UK. The two said they simply used wooden planks and rope to flatten corn in a circular fashion. The pair started the tomfoolery in the 1970s to tease locals who believed in UFOs.

In the latter half of the 1990s more “circle makers”, who tried to out do each other with the most complicated designs, emerged. But despite the hoaxers outing themselves, Mr Beake refuses to believe they could make the “highly geometric” patterns he has documented.

Mr Beake produced his UFO images at the 27th annual Glastonbury Symposium, an event which started to look at the crop circle subject and now covers other new age issues.

He said: “When you go first into a crop circle you can’t explain the feeling.
“You feel good, you feel nice.”

He produced one image which he said resembled a B-movie flying saucer. He said: “It looks like a classic 1950s UFO. One researcher said to me it was a parachute, but there is no one underneath.”

Mr Beake is convinced something paranormal is behind crop circle formation and that his UFO snaps could be part of the picture. He says he has also photographed balls of energy and light at crop circles. In one case he said he filmed bizarre solid balls flying around.

One was said to be near the ancient monument of Silbury Hill in Wiltshire, which he described as a perfect round flying object. He said: “This dark ball was near Silbury Hill. It is physical as you can see the sun shining on it.” He said it made no noise and they checked that there was no dirt on the lens that could have caused it. A drone they flew up above the hill was unable to detect it.

Another flying ball was snapped near Avebury Ring, near Stonehenge. He said: “It was a very strange form and not a plane or helicopter.” But he said it was not seen at the time of the filming, but was physical because the sun could be seen glinting on it.

Another one was filmed at Milk Hill, also Wiltshire. He said: “I can’t explain why that thing is here, it looks more physical than other balls of light.”

Scott Brando, who runs debunking website ufoofinterest.org said so-called UFOs such as these were often birds or insects that had flown past and been blurred in the process, giving rise to the indistinguishable shapes. They are actually referred to as blurbs by skeptical UFO researchers.