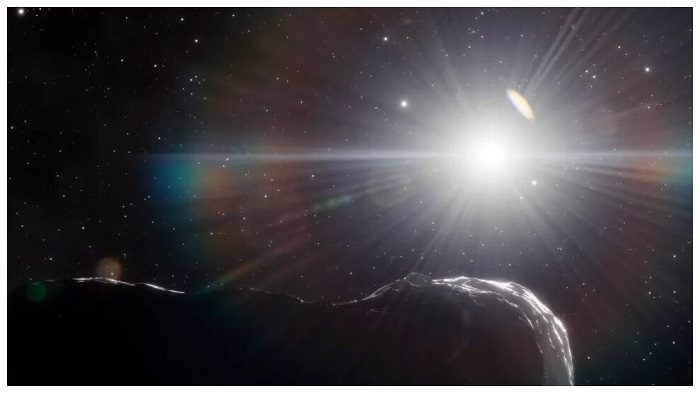 “”So far we have found two large near-Earth asteroids that are about 1 kilometer [0.6 miles] across, a size that we call planet killers,” Sheppard said.”

“Only about 25 asteroids with orbits completely within Earth’s orbit have been discovered to date because of the difficulty of observing near the glare of the sun.”

The 0.9-mile-wide (1.5 kilometers) asteroid is the largest potentially hazardous asteroid spotted in the past eight years and astronomers have dubbed it a “planet killer” because the effects of its impact would be felt across multiple continents.

The asteroid, named 2022 AP7, managed to avoid detection for so long because it orbits in the region between Earth and Venus. To spot space rocks in this area, astronomers have to look in the direction of the sun, and that is notoriously difficult due to the sun’s luminosity. For example, flagship telescopes such as the James Webb Space Telescope and the Hubble Space Telescope never look toward the sun, as the star’s brightness would fry their sensitive optics.

Because of that, astronomers have only a limited understanding of the nature of asteroids lurking in this region, and sometimes, surprises may happen. In 2013, a much smaller asteroid, only 66 feet wide (20 m), arrived from the direction of the sun completely without warning. That asteroid exploded above the city of Chelyabinsk in southeastern Russia, shattering windows on thousands of buildings.

“Only about 25 asteroids with orbits completely within Earth’s orbit have been discovered to date because of the difficulty of observing near the glare of the sun,” Scott S. Sheppard, an astronomer at the Earth and Planets Laboratory of the Carnegie Institution for Science and the lead author of the paper describing the new discovery, said in a statement.

The discovery of 2022 AP7, which would be much more damaging than Chelyabinsk if it were to hit Earth, was only possible thanks to the supersentive Dark Energy Camera (DEC) at the Cerro Tololo Inter-American Observatory in Chile, which scans the sky during twilight hours when these asteroids can be detected within two 10-minute periods each day.

“So far we have found two large near-Earth asteroids that are about 1 kilometer [0.6 miles] across, a size that we call planet killers,” Sheppard said.

Because the inner solar system asteroids are so hard to detect, they are underrepresented in models of the overall solar system space rock population. However, Sheppard believes that only a few unknown “planet killers” are left in this difficult-to-observe region. The good news is that most of these unknown asteroids likely follow orbits that keep them safely away from Earth.

“There are likely only a few [Near Earth Asteroids] with similar sizes left to find, and these large undiscovered asteroids likely have orbits that keep them interior to the orbits of Earth and Venus most of the time,” Sheppard said.

In addition to the potentially threatening 2022 AP7, astronomers discovered two other smaller space rocks in DEC observations, one of which is the closest to the sun ever seen. Because of its close proximity to the star at the center of the solar system, this asteroid, named 2021 PH27, experiences the largest effects of general relativity among all solar system objects, the scientists said in the statement.

According to Albert Einstein’s general theory of relativity, massive objects warp spacetime, which can affect the motion of other objects in their vicinity. These effects, which are very minor, can be observed as irregularities in the orbits of planets and asteroids that cannot be explained by Newtonian physics. Luckily, both, 2021 PH27 and the third asteroid, named 2021 LJ4, follow orbits that don’t intersect with that of Earth.

Astronomers currently monitor over 2,200 potentially hazardous asteroids, space rocks that orbit dangerously close to Earth and are wider than 0.6 miles [1 km]. Such asteroids are of the greatest concern as they would cause widespread destruction, potentially affecting the entire planet. However, even much smaller asteroids would cause a lot of trouble if they were to fall into densely populated areas. For example, an asteroid only 160 feet wide (50 m) would cause damage over the entire city of London if it were to explode above the city’s center.

Fortunately, astronomers are able to calculate asteroid trajectories for centuries into the future and there are currently no known space rocks that should have us worried. And by the time such a rock appears, the global space community hopes to have tools in their hands to protect the planet. In September, NASA’s Double Asteroid Redirection Test (DART) mission successfully changed the trajectory of the 525-foot-wide (160 m) asteroid moonlet Dimorphos which orbits around its 2,560-foot-wide (780 m) parent rock, Didymos. The success of this first-of-its-kind experiment suggests that as long as we know early enough, we may be able to keep pesky asteroids at bay.