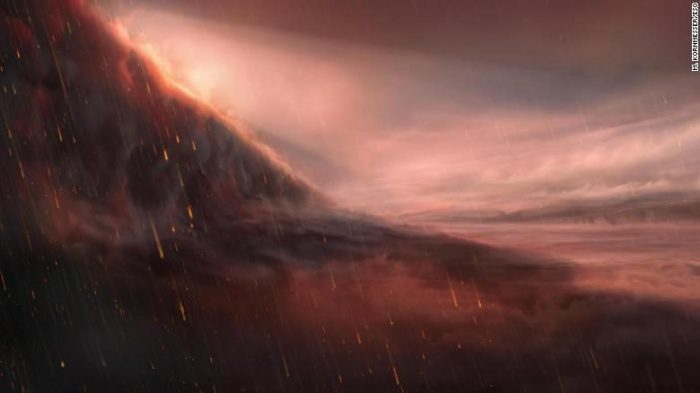 Headline Image Caption: This illustration shows a night-side view of the exoplanet WASP-76b. The ultra-hot giant exoplanet has a day side where temperatures climb above 2400 degrees Celsius, high enough to vaporise metals. Strong winds carry iron vapour to the cooler night side where it condenses into iron droplets. To the left of the image, we see the evening border of the exoplanet, where it transitions from day to night.

By Ashley Strickland
via CNN

On this sizzling exoplanet hundreds of light-years from Earth, droplets of iron rain fall from the sky at night.

Now, researchers have also detected sodium and ionized calcium in the planet’s atmosphere, based on observations from the Gemini North Telescope, which is located near the summit of Mauna Kea in Hawaii.

The new findings suggest the planet, named WASP-76b, is even hotter than scientists expected.

The research is part of a Cornell University-led project called ExoGemS, or Exoplanets with Gemini Spectroscopy survey. The project brings together scientists who study the diversity of atmospheres on exoplanets, which are planets located outside of our solar system.

The results published on September 28 in the Astrophysical Journal Letters and were presented Tuesday at the annual meeting of the Division for Planetary Sciences of the American Astronomical Society.

“As we do remote sensing of dozens of exoplanets, spanning a range of masses and temperatures, we will develop a more complete picture of the true diversity of alien worlds — from those hot enough to harbor iron rain to others with more moderate climates, from those heftier than Jupiter to others not much bigger than the Earth,” said Ray Jayawardhana, study coauthor and the Harold Tanner Dean of the College of Arts and Sciences and a professor of astronomy at Cornell University, in a statement.

“It’s remarkable that with today’s telescopes and instruments, we can already learn so much about the atmospheres — their constituents, physical properties, presence of clouds and even large-scale wind patterns — of planets that are orbiting stars hundreds of light-years away,” Jayawardhana said.

Discovered in 2016, the ultra-hot planet — which is about the size of Jupiter — orbits a star in the Pisces constellation 640 light-years away from Earth. Because of its close proximity to the star, WASP-76b completes one orbit around it every 1.8 Earth days and soaks up thousands of times the radiation that Earth receives from the sun.

“We’re seeing so much calcium (in WASP-76b’s atmosphere); it’s a really strong feature,” said Emily Deibert, study coauthor and doctoral student at the University of Toronto, in a statement.
“This spectral signature of ionized calcium could indicate that the exoplanet has very strong upper atmosphere winds. Or the atmospheric temperature on the exoplanet is much higher than we thought.”

The dayside’s blazing temperatures, which are hot enough to turn molecules into atoms and metal into vapor, create iron vapor. Rapid winds carry this over to the nightside, where relatively cooler temperatures hover around 2,400 degrees Fahrenheit (1,315 degrees Celsius).

The iron vapor condenses into clouds, causing rain that consists of liquid iron, and this creates the iron observed in the atmosphere.

The ExoGemS survey, which will ultimately study about 30 exoplanets, is led by Jake Turner, a Carl Sagan Fellow in NASA’s Hubble Fellowship program and research associate in Cornell University’s department of astronomy.

“Our work, and that of other researchers, is paving the way for exploring the atmospheres of terrestrial worlds beyond our solar system,” Turner said.

Understanding the chemistry of an exoplanet’s atmosphere will help astronomers understand its weather, climate and environment.

Ultra-hot gas giant exoplanets like WASP-76b, “which have day-side temperatures commensurable with the surface of cool stars, are an emerging class of exoplanets,” according to a previous study about the planet.

Previous examples of these extremely hot exoplanets include KELT-9b, WASP-121b and WASP-12b. And other types of unusual rain have been suggested on other planets, like HD 189733 b’s wicked winds that send glass-like silicates raining sideways around the planet and even diamond rain on Neptune.