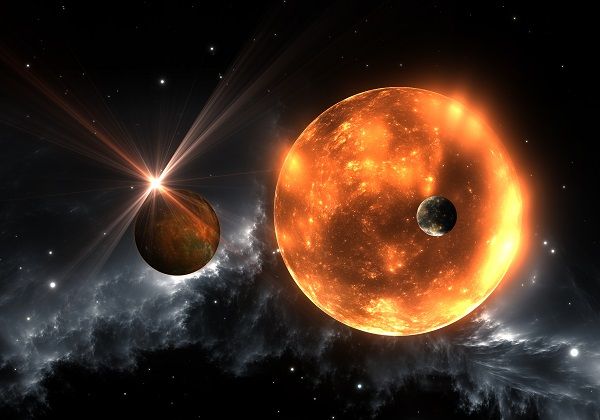 Planet with Similar Temperature to Earth Discovered Nearby – Could Host Life

Astronomers have discovered a world 11 light-years away that may have a surface temperature similar to Earth’s.

The planet, Ross 128 b, is Earth-sized and is now the second-closest to Earth in temperature. The closest is Proxima b, located around Proxima Centauri, 4.2 light-years from Earth.

Both planets orbit red dwarf stars, but what makes this new one somewhat more intriguing to astronomers is that its host star, Ross 128, is a relatively inactive red dwarf.

Red dwarfs are the most common types of stars in our universe. They are old but tend to be very active, with ultraviolet and X-ray flares showering nearby planets, potentially stripping them of any atmosphere. This reduces any chance of habitability, which is believed to be the case with Proxima b.

But that may not be the case for Ross 128 b. Because the star is relatively quiet, it doesn’t emit those deadly flares. It is the closest temperate world orbiting a star so quiet.

While the exact age of the star isn’t known, the team of researchers estimate that Ross 128 is about five billion years old. As well, it rotates once every 120 days, compared to our sun, which rotates about once every 27 days.

“Usually stars that rotate fast are active; stars that rotate slowly — particularly, slower than 100 days — tend to be very quiet, so no flares, weak winds,” Xavier Bonfils, an astronomer at the Institut de Planétologie et d’Astrophysique de Grenoble and lead author of the paper to appear in the journal Astronomy & Astrophysics, told CBC News.

“Maybe when it was younger, the planet experienced the same irradiation as Proxima b. But today it would probably not experience as much irradiation,” Bonfils said. “Even if the atmosphere evaporated a few billion years ago, volcanism could have built another atmosphere and it would remain today.”

And while Proxima Centauri is the closest star to Earth (there are actually two stars in the system), making Proxima b the closest exoplanet, that won’t always be the case: in 79,000 years — an incredibly short span of time, astronomically speaking — that title will belong to Ross 128 b.

Discovering this planet was no easy feat: it took 10 years and more than 160 observations, because of its inclined orbit around the star.

One of the easiest ways to search for a planet is to look for dips in the light of a star as a planet crosses in front of it, called transits.

Because Ross 128 b doesn’t transit, the astronomers used the European Space Observatory’s High Accuracy Radial velocity Planet Searcher (HARPS). It is the same instrument that led to the discovery of Proxima b.

“This discovery is based on more than a decade of HARPS intensive monitoring together with state-of-the-art … data-analysis techniques,” co-author Nicola Astudillo-Defru said in a statement. “Only HARPS has demonstrated such a precision, and it remains the best planet hunter of its kind.”

The instrument detects tiny wobbles in a star’s motion that may indicate the presence of a planet. To ensure that the detection isn’t influenced by any other factors, continual observations are required, which accounts for how long it took to confirm Ross 128 b.

“With these types of observations, there are no eureka moments,” Bonfils said.

While the discovery is a novel one, Bonfils said the next step will be to determine whether or not it orbits in the habitable zone, where liquid water can exist on the surface.