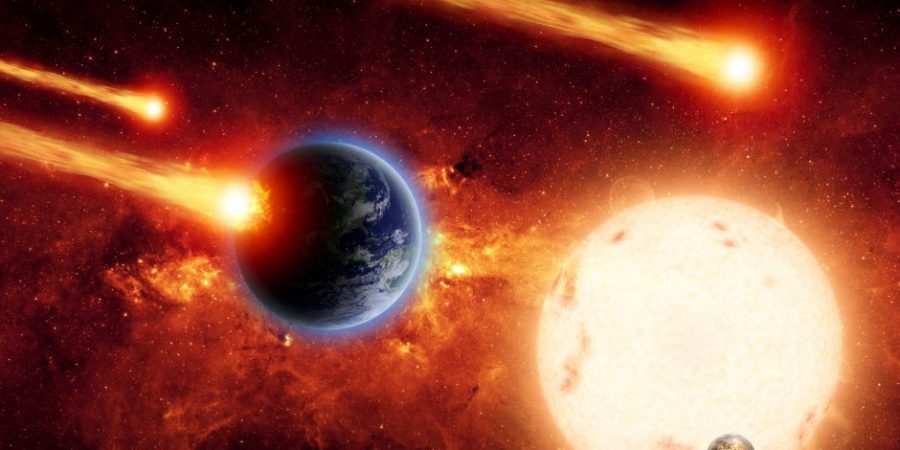 Planet X, Nibiru, The Invasion Of Our Solar System, And The Destruction Of The Earth

Conspiracy theorists have long feared that the Earth will be destroyed by a collision with the mysterious Planet X in the early 21st century, and recent scientific theories on the subject have done nothing to ease their fears.

The giant ice planet that scientists think gave the solar system its tilt is theorized to orbit the sun every 15,000 years or so and is alternatively referred to as Planet X, Planet Nine, or Nibiru.

Scientists have rejected the idea that Nibiru will obliterate the Earth as pseudoscience, but that hasn’t stopped conspiracy theorists from worrying about the destruction of our solar system, according to Global Research.

“Apparently the US government had made the decision to keep Nibiru and its projected earthly destruction under wraps.”

The idea of an unknown planet 10 times more massive than Earth was first proposed by astronomer Percival Lowell in the early 1900s and was widely publicized by Soviet-born scholar Zecharia Sitchin in the 1970s.

Then, in the mid 1990s, Wisconsin resident Nancy Lieder published her idea of the Nibiru Cataclysm on her website Zeta Talk after claiming to have received telepathic messages from aliens.

She gave a number of dates for an impending apocalypse including 2012 at the end of the Mayan calendar, and NASA was forced debunk the theory, Ames Center researcher David Morrison told Space.com at the time.

“While this is a joke to some people and a mystery to others, there is a core of people who are truly concerned.”

Then, in January, two planetary scientists from the California Institute of Technology (Caltech) in Pasadena inferred the presence of the still-undiscovered Planet X by observing objects beyond Neptune’s orbit.

Konstantin Batygin and Mike Brown estimate that the Neptune-sized planet orbits the sun every 15,000 years or so, according to the American Association for the Advancement of Science.

“If you say, ‘We have evidence for Planet X,’ almost any astronomer will say, ‘This again? These guys are clearly crazy.’ I would, too. Why is this different? This is different because this time we’re right.”

Now, Brown is predicting the documented discovery of the hypothetical giant planet within the next year and a half, according to Space.com.

“I think that there’ll be enough people looking for it that … somebody’s actually going to track this down.”

Conspiracy theorists who support the idea of the Nibiru cataclysm claim NASA is hiding evidence that the mysterious Planet X will destroy Earth in the early 21st century. This could be through an actual collision with our planet or with a near miss that throws the Earth’s gravity out of whack, causes a polar shift, or a series of asteroid collisions.

As the story goes, Nibiru was home to ancient alien astronauts who seeded life on Earth or possibly angels known as Anunnaki, the Nefilim giants in the Bible who came to Earth from Heaven.

In his book The 12th Planet, Sitchin claims our solar system is part of a binary star system and there are at least three unknown planets, including Nibiru, that orbit this second sun. When planets from this second constellation of planets come calling on our solar system, Sitchin claims they will drive a number of asteroids and comets towards Earth causing untold damage to the planet.

Perhaps the strangest thing about the Planet X Nibiru controversy is that scientists and conspiracy theorists are starting to agree on one thing: the truth will soon be uncovered, Brown told Space.com.

“There are a lot of people looking, and we are trying as hard as we can to tell people where to look. We want it to be found.”