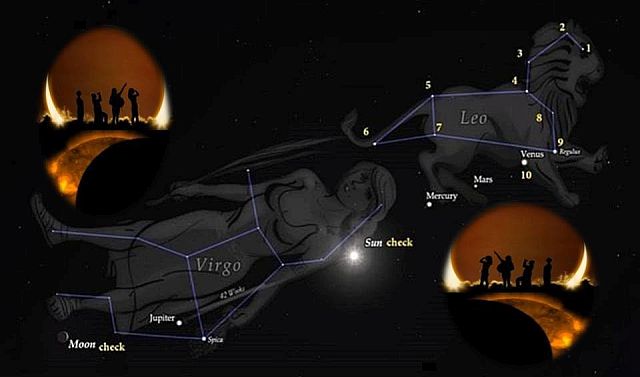 In this Dahboo77 takes a look at the coming events that we will see in 2017. He starts with the extremely rare US solar eclipse on August 21, he then takes a look at the alignment of stars on September 23, 2017 and its possible connection to Revelation 12. See first video.

The Great American Eclipse occurs in the exact same area of the sky as the Rev12 Sign and as millions of people look to the sky they will be given a short glimpse of this Sign as it moves into its final stages of fulfillment.

The remarkable crop circle of May 22, 2017 discovered in Cerne Abbas Giant, Nr Minterne Magna, Dorset, UK, which depicts the Eye of RA, refers to these upcoming events? 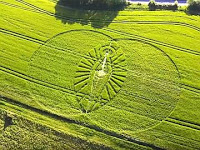 The code contained in the Eye of RA Crop Circle, denotes and broadcasts the future ritual dates of 9-21, 9-22, 9-23, 9-24, the established and repeated future dates associated with the future plans of the NWO globalist?

And because the future plans of these globalists Trump tweeted on May 31, 2017 the cryptic word COVFEFE as a coded response to the NWO ritual globalist, seeking a one world govt. and one world religion? (See video on the crop circle – the Eye of RA).

COV-Fe”Fe and the translation “I Will Stand Up” is a declaring of Trump’s plans to be standing up and it indicates that the NWO Globalist are going to fail at their Trump elimination plans and which will then cause the NWO Globalist to fail in their control over planet earth?

Sudden changes and or new directions are expected as a result of Trump telling the world and the NWO Globalist, that they WILL in the future Fail to do what they sought to do, and will instead, be defeated by their own evil plans and actions? (See video on Trump’s COVFEFE).

In no way am I calling for rapture or anything like that but one thing is for sure, the alignment of stars will happen on September 23, 2017, which comes 33 days after the US solar eclipse, and could be linked to The Revelation 12 Sign which is an extremely rare and complex astronomical alignment which many believe matches the Biblical prophecy found in Revelation 12:1-2.

The most unique portion of the Rev12 Sign is the fact that the king planet (Jupiter) enters into the womb area of the woman (Virgo), does a loop in her womb area and stays there for just over 9 months (the period of a human pregnancy).

In addition to this, the Sun, Moon, Mercury, Mars and Venus all take their positions perfectly on September 23, 2017. Together they form a sign which has been found to be completely unique, even after studying more 7000 years in astronomy software. See second video.

More questions than answers, but both events in the heavens will be used to create the timing that kicks off chaos by the Powers that be… will it cause a major shift in people’s mind and attitude?

Old ways will be destroyed to give way to new one!