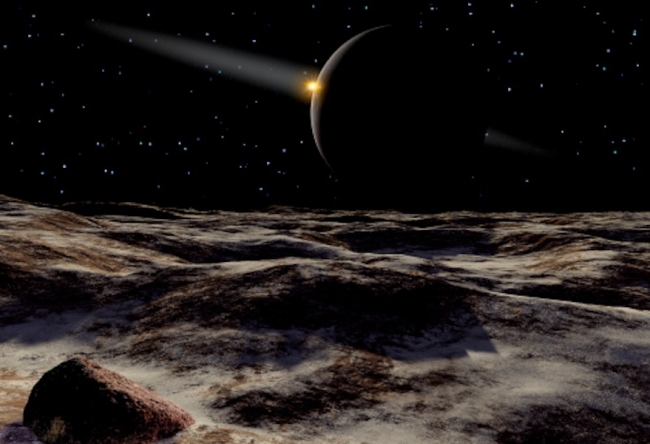 A new study has revealed the unique way that Pluto’s hazy atmosphere interacts with solar wind and suggests that Pluto is more like a planet than we think.

Using data gained from the NASA’s New Horizons spacecraft, a new study has revealed that the layers of Pluto’s atmosphere might form due to the influence of solar wind. The team observed material coming off of Pluto and were able to capture its surprising interactions with the intergalactic gravity waves.

“This is a type of interaction we’ve never seen before anywhere in our solar system,” said David J. McComas, a professor at Princeton University and lead author of the study.

The study gives space physicists more information on the interaction between Pluto’s atmosphere and solar wind, which is the plasma that is sent from the sun into the solar system at approximately 1 million miles per hour, covering the planets, asteroids and comets in its path with electrons and protons.

“The results are astonishing,” McComas said. “We were fascinated and surprised.”

Prior to the study, researchers believed that Pluto’s characteristics were more like those of a comet, which possesses a large region of solar wind that experiences a gentle slowing. Conversely, planets likes Mars and Venus contain abrupt diversion solar wind encounters. Now, researchers believe that Pluto is actually a hybrid of these characteristics.

“This is an intermediate interaction, a completely new type,” McComas said. “It’s not comet-like, and it’s not planet-like. It’s in-between. We’ve now visited all nine of the classical planets and examined all their solar wind interactions, and we’ve never seen anything like this.”

“These results speak to the power of exploration,” said Alan Stern, a member of the New Horizons team. “Once again we’ve gone to a new kind of place and found ourselves discovering entirely new kinds of expressions in nature. Many people were surprised by Pluto’s complex geology and atmosphere. This paper shows there’s even more that’s surprising there, including its atmosphere-solar wind interaction.”

In addition to the unique solar wind interactions, the Princeton University team also discovered that very little of Pluto’s atmosphere contains neutral particles that are converted into electrically charged ions before being sent into space.

“This is backwards for many other planets, where the neutral particles stay relatively close to the planet,” said Michael Liemohn, a University of Michigan astrophysicist who helped edit the paper. “An ion particle becomes influenced by the electric and magnetic forces present in the solar system, which can be a very efficient acceleration processes. But at Pluto, McComas et al found that only a wisp of atmosphere leaves the planet as ions.”

The findings were published in the May 4 issue of the Journal of Geophysical Research: Space Physics.