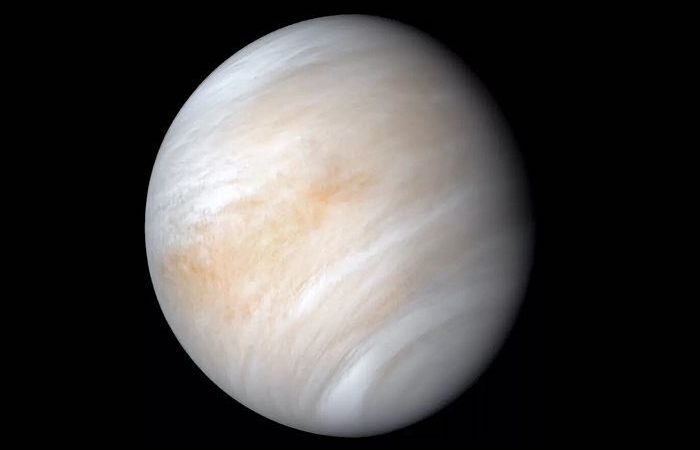 An unexplained chemical has turned up in the upper atmosphere of Venus. Scientists are tentatively suggesting it could be a sign of life.

The unknown chemical is phosphine gas (PH3), a substance that on Earth mostly comes from anaerobic (non-oxygen-breathing) bacteria or “anthropogenic activity” — stuff humans are doing. It exists in the atmospheres of gas giant planets, due to chemical processes that occur deep in their pressurized depths to bind together three hydrogen atoms and a phosphorus atom. But scientists don’t have any explanation for how it could appear on Venus; no known chemical processes would generate phosphine there. And yet, it seems to be there, and no one knows of anything that could make phosphine on Venus except for living organisms.

This discovery, published today (Sept. 14) in the journal Nature Astronomy, caught everyone by surprise — including the team that found it.

Back in June of 2017, that team pointed the James Clerk Maxwell Telescope in Hawaii at Venus and tuned it to look for signatures of phosphine. “The aim was a benchmark for future developments,” they wrote in the journal article.

In other words, they were checking what the phosphine signatures might look like as a baseline, on a planet assumed to have no natural way of producing the substance. “But unexpectedly,” the researchers wrote in the study, “our initial observations suggested a detectable amount of Venusian PH3 was present.”

They confirmed what they were seeing using the Atacama Large Millimetre/submillimetre Array in Chile. Variations in the light coming from Venus’ upper atmosphere showed a substantial amount of phosphine there.

But phosphine on Venus doesn’t necessarily mean life on Venus, the authors wrote. They raised the possibility of life because bacteria are the only known way of making phosphine on a planet without a gas giant’s super-high atmospheric pressures. But it’s just as possible that some previously-unknown chemical process is producing the gas.

“This could be unknown photochemistry [chemical reactions that require light] or geochemistry, or possibly life. Information is lacking — as an example, the photochemistry of Venusian cloud droplets is almost completely unknown.”

That means that no one really knows how the chemicals in Venus’ upper clouds react to sunlight.

Venus has not previously been considered a likely site for life in this solar system, so scientists had yet to explore such questions with the same level of resources devoted to hunting for signs of life on Mars. The hot, almost Earth-size planet with its toxic atmospheric chemistry destroys even the hardiest robots within minutes. How would life survive on Venus?

In the past, the authors of the new paper pointed out, some researchers have suggested the possibility of life in the planet’s uppermost cloud layer. Unlike the surface, which averages 867 degrees Fahrenheit (464 degrees Celsius), Venus’ higher clouds are relatively cool, reaching 85 F (30 C) in the layer where phosphine was detected, and could more plausibly offer a habitat for some sort of floating life.

Figuring out whether that really is the source of Venusian phosphine, or whether it came from some other source, will take more data and better modeling of the planet’s behavior, the researchers wrote.