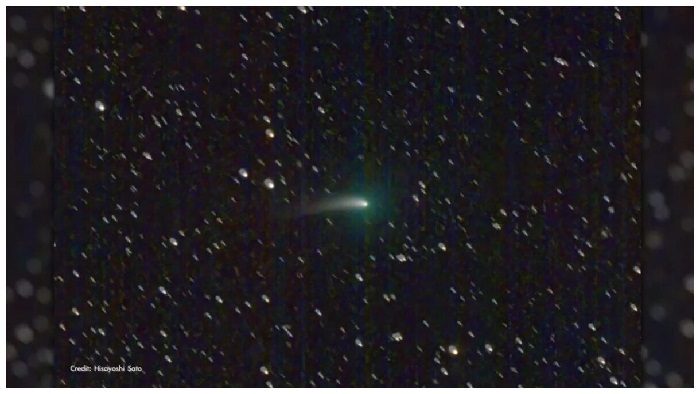 “If the comet continues to brighten as it currently is, it could be visible in dark skies with the naked eye.”

The comet C/2022 E3 (ZTF) could be bright enough to be spotted with the naked eye as it passes the sun and Earth at the end of the first month of 2023.

At the start of 2023 Earth will be visited by a newly discovered comet that may just be bright enough to be spotted with the naked eye.

The comet, named C/2022 E3 (ZTF), is currently passing through the inner solar system. It will make its closest approach to the sun, or perihelion, on Jan. 12, and will then whip past Earth making its closest passage of our planet, its perigee, between Feb. 1 and Feb. 2.

If the comet continues to brighten as it currently is, it could be visible in dark skies with the naked eye. This is difficult to predict for comets, but even if C/2022 E3 (ZTF) does fade it should still be visible with binoculars or a telescope for a number of days around its close approach.

Observers should look for C/2022 E3 (ZTF) when the moon is dim in the sky, with the new moon on Jan. 21 offering such an opportunity, weather permitting. According to the website Starlust, the comet will be in the Camelopardalis constellation during its close approach.

That means the last humans that could have spotted C/2022 E3 (ZTF) were early homo sapiens alive during the last glacial period or “ice age.” So, too, could some say of the last Neanderthals, as that species became extinct around 10,000 years after the last perihelion of C/2022 E3 (ZTF).

Of course, the Neanderthals and early humans wouldn’t have known what C/2022 E3 (ZTF) was, and the comet was identified much more recently than the last ice age. The comet was spotted by the wide-field survey camera at the Zwicky Transient Facility in early March 2022.

Current images of C/2022 E3 (ZTF) show its coma, a surrounding halo of gas and dust, glowing with a greenish hue and a long but faint cometary tail extending from its main body.