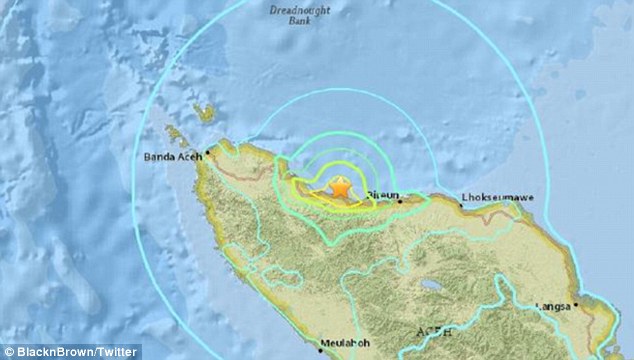 Powerful 6.8-Magnitude Earthquake Strikes off the Coast of Indonesia

An earthquake with a magnitude of 6.8 has struck 130km southeast of Banda Aceh in northern Sumatra, Indonesia, the United States Geological Survey says.

At least 18 people have been killed and dozens more left trapped and injured after an earthquake struck off the coast of Indonesia.

Heavy machinery is being used to rescue people from collapsed homes after a 6.8-magnitude earthquake hit north Sumatra at 5am local time.

A mosque in the town of Bandar Baru was also destroyed during the quake, though it is not clear if anyone was inside at the time.

Sutopo Nugroho, of the National Disaster Management Agency, told the Sydney Morning Herald: ‘The earthquake was felt strongly and many people panicked and rushed outdoors as houses collapsed.’

The Bureau of Meteorology confirmed there is no tsunami threat to Australia from the earthquake.

The earthquake happened in the same location as the 2004 Boxing Day quake that killed 230,000 after creating a 30m-high tsunami

The quake comes weeks after a 7.8 magnitude quake struck just north of Christchurch in New Zealand, killing two people and causing at least a billion dollars worth of damage.

It also comes 12 years after a 9.1 magnitude quake in the same area triggered what is believed to be the deadliest tsunami in history.

More than 170,000 people died in Indonesia on Boxing Day in 2004 following the huge quake, unleashing waves up to 30m high across the Indian Ocean.

Fortunately no tsunami warning has been issued for this powerful earthquake.

SHOW YOU CARE, COMMENT AND SHARE
IF YOU ENJOY THIS SITE PLEASE TELL OTHERS ABOUT US…SHARING IS CARING