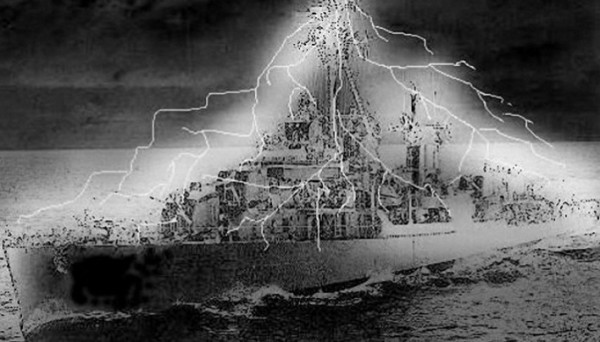 According to some theorists, there was an experiment in the past conducted by the US Navy which went terribly wrong.

This experiment is known as the The Philadelphia Experiment. It took place in 1943 when a ship named “USS Eldridge” was about to be tested by The US Navy.

Great minds like Albert Einstein had part in the experiment which included his Unified Field Theory (this theory is uniting the fields of electromagnetism and gravity into one field, in other words if light were bent, then space-time would be bent, effectively creating an invisible time machine).

Everything was set for the test, the crew was on the boat, 2 massive Tesla Coils run through the ship, a couple of magnetic generators were installed and everything seemed normal, well as normal as it gets for crazy scientists. But then, everything went… well, let’s just say bizarre.

I’ll get back to the insanity but let me first explain what the test was about. The US Navy wanted to create a special boat that had magnetic invisibility, radar invisibility, optical invisibility, pretty much every invisibility there is.

I’ll get back to the insanity but let me first explain what the test was about. The US Navy wanted to create a special boat that had magnetic invisibility, radar invisibility, optical invisibility, pretty much every invisibility there is.

There was a theory Nikola Tesla finished in 1943 shortly before he died and the theory was some kind of a “Unified Field Theory”. With this theory it was possible to use a large Tesla Coil and make things disappear creating an exact replica that comes into being a short distance away.

This was unknown and kept in secret by every member of the experiment until Morris K. Jessup, an astronomer and former graduate-level researcher, published The Case for the UFO.

If you think this book reviled the secrets of the Philadelphia experiment, then you are wrong. This book had not a single thing about the experiment or its secrets. So what part did this book played?

It was a man, a mystery man calling himself “Carlos Allende” who saw the book and decided that Morris K. Jessup was a man who could understand him, someone who would listen to what he has to say without picturing him in a straitjacket.

So, Carlos contacted our guy Morris by writing him a good old fashioned letter. In the letter he described the horror that really happened in the “Philadelphia Experiment” and explained that he saw everything from the “SS Andrew Furuseth”, a nearby merchant ship where he was serving at the time.

According to Allende, Einstein had developed the Unified Field Theory, but had suppressed it, since mankind was not ready for it, a confession that the scientist shared with the mathematician, philosopher and his dear friend Bertrand Russell.

When Morris tried to contact Mister Carlos the reply arrived a couple of months later by correspondent identifying himself as “Carl M. Allen”. Because of safety measures Morris terminated communication with this new “Carl” guy.

That was how the truth about “The Philadelphia Experiment” came out from the “closet”, but what really happened on that ship. The thing I am going to describe is beyond the wildest imagination. It is crazy, I mean “Fringe” meeting “The Outer Limits” crazy.

As I said everything was ready and normal and then the scientists pushed the button starting the generators and transferring electric energy through the Tesla Coils that run through the ship. As the electromagnetic field increased in strength, it began to extend as far as 100 yards out from the ship in all directions, forming a large sphere and making the ship fuzzy. Greenish fog started to surround the ship.

No screams were heard by the crew on the ship. Suddenly the ship vanished, not just from the view, but from Philadelphia all together. To make things even stranger, the ship appeared several hundred miles at Norfolk, Virginia, staying there for couple of minutes and then reappearing in Philadelphia again.

The ship was “un-synced” from This Universe which is why it was able to travel from Philly to Virginia and back instantly but that was not the horror “Carlos” described. Some members of the crew were disoriented; others were “basket cases”.

Strangely a couple of the members were missing – “Just like They Have Been Erased From Time Itself”. However, the most disturbing view was seeing some of the crew members embedded in the bulkheads, decks and railings of the ship. They were alive and literally a part of the ship.

A lot of them were killed instantly, some were taken for experimenting, and others were taken and locked into asylums. Some survivors, who were alive and as fine as you can be after such trauma, reported blacking out from a couple of minutes to a couple of hours.

Rumors have been heard that some men entered into what was called the “Freeze”. This is where men faded from view, unable to move, speak or otherwise affect their surroundings. Interestingly enough, invisible crewmen were still visible to other sailors who had survived the original experiment.

After a while, the Freeze effect lasted for days or months, and became known as the “Deep Freeze” driving crewmen crazy. The only way men were able to recover from the “Deep Freeze” was by other crewmen performing a “Laying on of Hands” technique. Unfortunately, two men burst into flames while Laying on of Hands, burning for 18 days despite all attempts to quench the fire.

I know, this sounds like somebody had a little too much free time and a wild imagination but this is strange even for the wildest imagination and exactly that fact proves that this might be true. Even if all of this is 90% false and just a fantasy story, that 10% is still frightening.

And think about this, if 50 years ago people were experimenting with Time Travel, Unified Field Theory, and Teleportation, what are they experimenting with today. Even though, this sounds bizarre and sci-fi it is all theoretically possible and this experiment was just the beginning of human manipulation with electromagnetic fields.

After “The Philadelphia Experiment” ended, “The Phoenix Project” started culminating with “The Montauk Project” in 1980s at Camp Hero or Montauk Air Force Station on Montauk, Long Island for the purpose of developing psychological warfare techniques and exotic research including time travel.

According to astrophysicist and UFO researcher Jacques Vallée, the Montauk Experiment stories seem to have originated with the account of Preston Nichols, who claimed to have recovered repressed memories of his own involvementMany believe in the story of “Carlos Allende” and many see it as a plot to a sci-fi movie. Be that as it may, “The Philadelphia Experiment” showed just how powerful electromagnetic manipulation can be and maybe it even created the anomaly of “The Bermuda Triangle”.

It was for sure an opening of Pandora’s Box in terms of science and as much as we want to know what really happened we can never be 100% sure. All that we can is believe in what we find to be mostly true and fill up the blanks with our imagination.