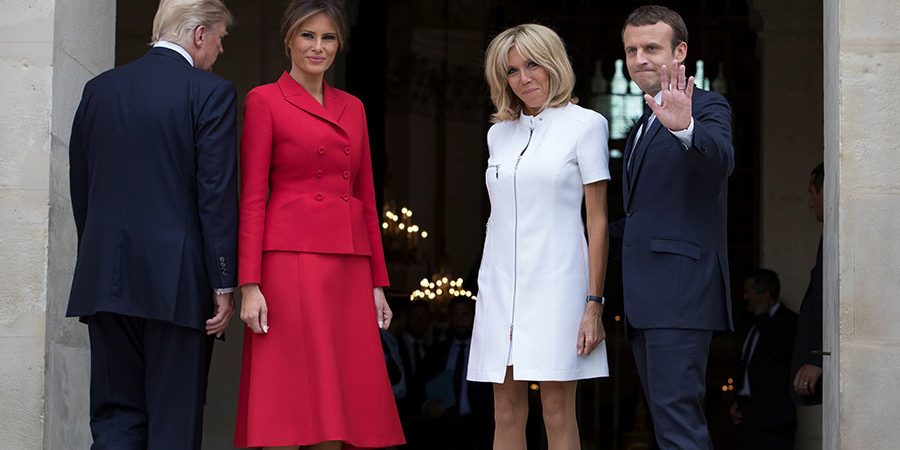 Donald Trump inspired a collective cringe after telling French President Emmanuel Macron’s wife, Brigitte, she was in “good shape,” seemingly unable to mask his shock that an older woman could be so trim.

The moment was captured in a live video on Macron’s Facebook page Thursday. The Trumps and Macrons are seen chatting after visiting museums at Les Invalides. Trump turns to Brigitte Macron and tells her, “You know, you’re in such good shape,” before turning to Macron and telling him, “She’s in such good physical shape.”

He then turns back to Brigitte and says, ”Beautiful.”

Trump’s comments were met with a combination of disgust and embarrassment online. Earlier in the day, he was also caught giving her one of his awkward handshakes that saw him grasp her hand and pull her towards him.

Many pointed out that Trump was seemingly amazed that a woman of Brigitte’s maturity could possibly look so good. Perhaps not a surprise given Trump’s penchant for marrying women much younger than himself. Others said his comments were patronizing and insulting to Brigitte.

he most likely commented on her physical shape because she is older than Macron by several years. Yup, our president has no tact. 😣

#RNBreakfast Trump talking to Macron about his (older) wife Brigitte…she's in such good physical shape..(subtext, for an old woman)

Macron's wife is two decades older than him. This is an alien concept to keep-marrying-younger-ones Trump. https://t.co/vIJZ9MSJZf

Curiously, the age difference between Macron and his wife and Trump and his own are both 24. Only in Trump’s case, he’s the older one.