Seismic, volcanic and magnetic North Pole migration indicators all say that Earth is firmly within the first earth change uptick period for the 2016 Earth Orbit Cycle relative to the Black Star now moving through the Libra Constellation.

Year-over-year seismic event values show an increase in the key 2.5 to 4-magnitude earthquake events for the 2016 cycle even in the absence of the larger-magnitude quake events with the 5-mag event total falling in between the values for 2014 and 2015. The 6-magintude quake events expected for Week 5 of the 2016 cycle are beginning to show up in Week 6 about a week behind schedule, as we had five of these large-magnitude quake events for Week 5 of the 2014 and 2015 orbit cycles representing a Jolt Value (J) in the seismic charts appearing just like clockwork. This 6.4 Quake Event from March 20th (link) is among those that will show up for Week 7 next week in Volume 13, as the reporting period for this week ended on Saturday March 19th. Now let us look at how the 2016 Seismic Chart is filling out below:

The surprises last week included the low number of seismic events across the board with only one of the 6-mag quakes and just 194 of the key 2.5 to 4-magnitude quake events that caught me very much by surprise. We should have seen this sub-200 value for the smaller indicator earthquake events in the first week of February 2016 and not in Week 5 of the 2016 cycle making me nervous that the Black Star has moved farther left in the orbit diagram than expected indicating that we could be looking at a 2016 Earth/Black Star Crossing Event currently scheduled for May 20, 2017. I watched the seismic data coming in for the last week with great anticipation that we could be looking at our big Jolt Value for the 2.5 to 4-magnitude quake events that should show up in Week 2. These values for the last two years were 536 and 343 respectively for the second week of the 2014 and 2015 orbit cycles, but the 2016 Week 2 value was only 273 also suggesting that the seismic pattern for the last several years has been broken. I was relieved to see that this key indicator-quake value was only 242 eliminating the possibility of a seismic Jolt from the equation, even though this value is 30 quake events higher than the year-over-year average. This high value for these smaller quakes should reach the 242 mark in Week 9 of the cycle and then almost a 300 value in the two weeks following our Sun/Earth/Black Star nearside-alignment quake event currently scheduled for May 7, 2016, so long as Earth regains equilibrium and the pattern holds from previous orbit cycles.

Take a look at the screenshot image taken from EQuake3D where we can see evidence pointing to what is coming later in the timeline:

Use the EQuake3D link above and open the image in full screen mode to see more details about what is happening along the Asian/Australian side of the Pacific Ocean/Ring of Fire as we speak. The 4.4 Tonga Quake Event (link) seen at the very bottom of the image is the most-significant earthquake event for this week, as the quake event depth (672 kilometers) fell only 5 kilometers short of becoming the new record surpassed only by the 7.8 Japan Quake Event at 677 kilometers deep in May of 2015. We saw this same deep quake event pattern in the same region through the recent earth change uptick period running from August 15, 2015 to the end of November, when we then saw the two deep 7.6 Peruvian Quake Events at more than 600 kilometers deep at our Earth/Sun/Black Star backside alignment. The pattern moving forward is for these big/deep quakes to cross over into South America and push north through Nicaragua and beyond the southern border of Mexico where the deep magma wave stalled through the recent earth change lull period running from the end of November to the first week of February 2016.

Now focus your attention on the northern region of the Pacific Ocean Ring of Fire to realize this is the area where the big 6-mag earthquake events are taking place and at the very location where the northern deep magma wave stalled through the recent earth change lull period. We are seeing signs that the tectonic/volcanic pressures are again intensifying as predicted with these pressures shifting from the Asian side over to the American side of the Pacific Ocean/Ring of fire, which I believe is responsible for the changing seismic/volcanic patterns in my modeling that is showing up in the charts. Look just to the right of the big 6-mag quake event shaded in blue and you will see the large circle highlighting this quake event (link), just north of the Cascadia Subduction Zone. This quake event is very near the location where I expect to see the critical linchpin quake event that begins a series of very big earthquake events along the US/Canada West Coast that changes everything for Yellowstone and the USA later in the timeline.

Earth saw five new volcanic eruptions this week in the same two areas where the two deep magma waves stalled along the Pacific Ocean/Ring of Fire.

We should expect to see the tectonic/volcanic pressure shift to continue moving around the Pacific Ocean/Ring of Fire through the Alaskan Quake Swarm Area from the north and up beyond the southern Mexico border from the south, until these two deep magma waves and rising magma plume activity eventually converge at the proliferating California Quake Swarm Area that is becoming a US West Coast Quake Swarm Area that already encompasses the bulging Yellowstone Reservoir and Magma Chamber. That means we should see new volcanic eruptions in the Aleutians moving east and in Central America moving north, until eventually Dutchsinse is going crazy making videos about new volcanic activity springing up in the USA southwest; even if the actual eruptions come during future earth change uptick periods. 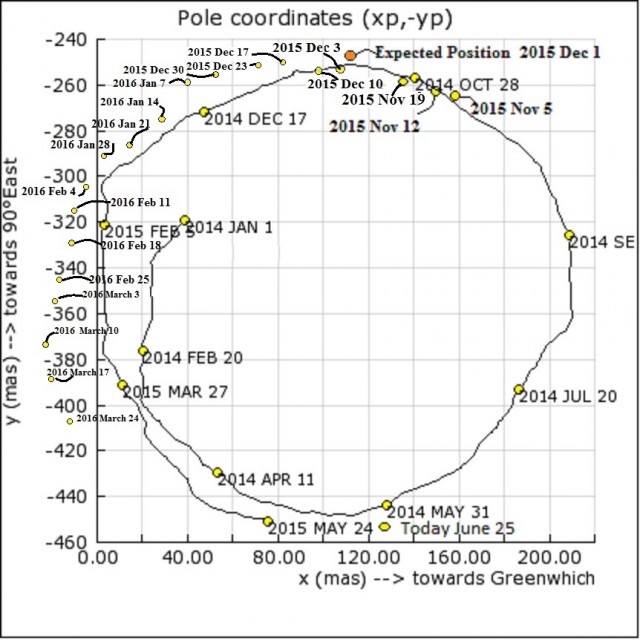 The current magnetic North Pole location is about one week ahead of schedule moving down the chart more rapidly than expected. The last two years have seen the migrating magnetic North Pole moving very predictably and trailing the previous year’s location by the same 11 to 13 days that we see in the Seismic Chart.

My search for an updated magnetic North Pole migration chart led me to this blog website operated by a guy named Morpheus. I thought it very important to share this information with newsletter subscribers/contributors, because he also has made a connection between the magnetic North Pole migration patterns and a heavy-mass object (HMO) in the Leo Constellation, which was the Black Star location in 2008 through 2012 indicating that perhaps Morpheus is either on or near the right track with his own investigation. I also wrote the people in charge of posting information on this website (here) requesting instructions on how to obtain updated pole migration charts for this newsletter. Here is an updated chart found on Morpheus’ website: 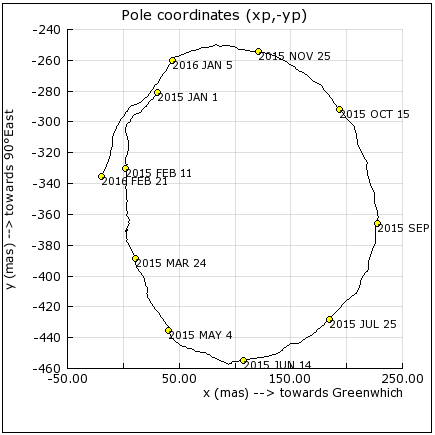 Bill has updated the content on the http://terral03.com website to include the new Black Star Event Timeline that you can download using this link (here) in the 2016 Dropbox Folder provided for all 2016 Newsletter Subscribers and Contributors. You can see the chart in the Feature Article below entitled “The Old Model” submitted by Wesley where he asks very good questions concerning the old modeling indicating that Earth will suffer a Black Star/magnetically-induced geological pole shift at some point in the current 2016 Orbit Cycle.

Project supporters for this week include John and Sonndra who supported the research by subscribing to Terral’s 2016 Newsletter at http://terral03.com receiving full subscriber benefits for the life of their subscriptions. Scott, Sharon, Ronald, Darren, Steven and James all renewed their subscriptions from previous years with Randi and Mike making another donation to the research. Thank you to everyone supporting the research to make this investigation possible. Terral

Read the Full Report and related articles using a complimentary link to Terral’s 2016 Newsletter Volume 12. Subscribe and support the research at http://terral03.com.

IF YOU ENJOY THIS SITE PLEASE TELL OTHERS ABOUT US…SHARING IS CARING
HAVE A COMMENT? LEAVE YOUR COMMENT BELOW
The views expressed in this article are solely those of the writer and do not necessarily reflect the views of all or other BendedReality staff – If you are interested in being a guest writer for our site, please CONTACT US and let us know, we would be glad to consider you for a guest writing opportunity (NO EXPERIENCE IS REQUIRED).