Seismic and volcanic chart indicators say Earth is moving through the first of two well-defined earth change uptick periods for the 2016 Earth Orbit Cycle relative to the inbound Black Star now moving through the Libra Constellation just below the ecliptic plane.

Year-over-year seismic values for the last three years show an uptick in weekly earthquake events across the board with the key 2.5 to 4-magnitude earthquake event values remaining almost identical for Week 8 at an average of 210 global events. Week 8 for the last three orbit cycles represents a transition period from average weekly quake event totals that shift to the higher end of the spectrum moving forward for the next two months through the end of May for 2016. Click on this link (here) and review the weekly seismic event values for 2014 and 2015 for evidence of a clear well-defined earth change uptick coming for Week 9 through Week 16 for earthquake events across the entire seismic chart. The 5-magnitude quake event value for Week 8 of 2014 is just 20 events, as you can see above. Then we see a progression higher to 34 for Week 9, then 31 for Week 10, then 42 events for Week 11; until we see more than 50 of these 5-mag quake events for Week 13 and Week 15 on either side of the nearside-alignment quake event in Week 14. In fact, we see more than 30 of these 5-mag quake events for each week running from Week 9 all the way through Week 16 and a pattern that I expect to see duplicated for the 2016 Earth Orbit Cycle moving forward. Five of those weeks we see four or more of the 6-magnitude earthquake events with six of the 7-mag quake events and one 8-mag quake for the three weeks spanning Week 13 through Week 15 of the 2014 Earth Orbit Cycle.

Year-over-year weekly seismic values show that this first earth change uptick period had slightly lower values with focus on Week 13, but I fully expect all seismic values to remain higher than average all the way to the end of May 2016 with the 7-magnitude earthquake events kicking off around Week 11. The seismic data for the last two orbit cycles indicate that a mini lull is coming for Week 12 with seismic values dropping briefly, before exploding higher for the three-week period around the predicted May 7, 2016 Sun/Earth/Black Star nearside-alignment quake event.

Seismic/volcanic pressures are definitely intensifying in and around the Yellowstone Reservoir and bulging Magma Chamber, as the deep northern magma wave continues moving east from the Kamchatka region over through the Aleutians to the Alaska Quake Swarm Area where activity has been intensifying. I strongly recommend that you read through these related stories (here and here) with this YouTube video (here) concerning how seismic recording equipment is being turned off to hide increasing earth change activity taking place throughout the region, as Yellowstone becomes more active from nearing Black Star proximity. 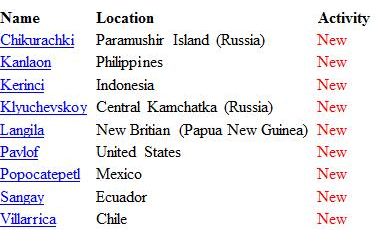 Earth saw nine (9) new volcanic eruptions this week representing the highest value we have seen in quite some time. The pattern suggests that volcanic pressures will continue pushing east towards Alaska from Russia and north from South America towards Mexico, as these two deep magma waves regain momentum from the previous earth change uptick period and eventually converge at the widening California Quake Swarm Area that already has spread north to include the bulging Yellowstone Magma Chamber and adjacent calderas. Those of you living anywhere west of the Rocky Mountain Ridge along the US/Canada West Coast should be on high alert concerning the seismic/volcanic pressures intensifying throughout the region, because the evidence states very clearly that you are increasingly at risk. 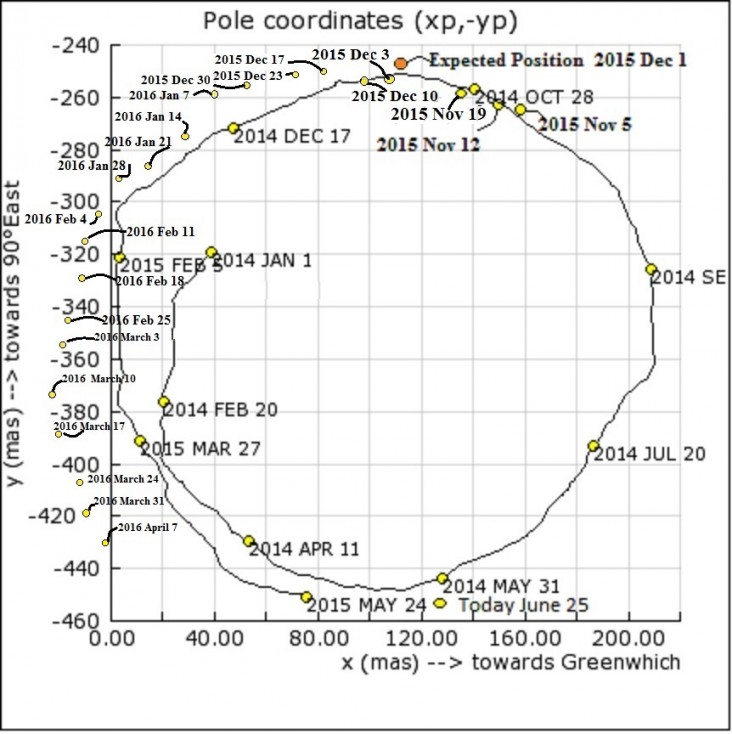 The migrating magnetic North Pole increased velocity over last week and remains ahead of schedule by a little more than a week compared to the pattern from the last two orbit cycles. I will continue posting this information in the weekly newsletter for signs that a new pattern will become established helping me find correlations between the seismic, volcanic and magnetic North Pole migration patterns that my gut says are connected.

Project supporters for this week include Nancy and Ron who subscribed to Terral’s 2016 Newsletter to receive full subscriber benefits at http://terral03.com. Agape, Tomo and Rachel renewed their subscriptions from previous years with Randi (and Mike) and Dennis making donations to the research. Thank you again to everyone supporting the research for making the investigation possible. Terral

Read the Full Report and related articles using a complimentary link to Terral’s 2016 Newsletter Volume 14. Subscribe and support the research at http://terral03.com.