Seismic and volcanic indicators all say that Earth remains firmly within the first earth change uptick period for the 2016 Earth Orbit Cycle relative to the Black Star now moving between the Sun and Libra Constellation. The seismic data for the last three years indicate that Earth is currently moving through a mini lull period anticipated for Week 12 that began last Sunday, April 24th running to this Saturday April 30th that we can already see using EQuake3D where you are hard pressed to find a 6-magnitude earthquake event for the last seven days.

Year-over-year weekly earthquake event values for Week 11 show a lower number of the higher-magnitude earthquake events with slightly higher values for the 5-mag and 2.5 to 4-mag quake events. Remember that Week 12 of the 2016 Earth Orbit Cycle relative to the inbound Black Star will end this Saturday at midnight for Week 13 of our reporting period to begin where the modeling says the earth change uptick will run for a three-week period with a flurry of higher-magnitude earthquake events with focus on the predicted May 7, 2016 Sun/Earth/Black Star nearside-alignment quake event (N) expected along the Pacific Ocean/Ring of Fire, or a nearby area like we saw last year with the 7.8 Nepal Quake from April 25, 2016. Click on the 2014/2015 Final Seismic Chart and look carefully at the pattern on displace for Weeks 9 through 15 and you will see that the evidence definitely points to a seismic lull with focus on Week 12 that explains why we are seeing a sharp reduction in global seismic activity representing a brief calm before the coming seismic storm.

Weekly seismic values decreased from Week 10 to Week 11 across the board with another series of decreasing values expected for Week 12. We should be paying careful attention to the northern region of the Pacific Ocean/Ring of Fire and the area between Kamchatka and Alaska where seismic and volcanic pressures are shifting from west to east in anticipation of then moving south into the Cascadia Subduction Zone where I expect the linchpin quake event to take place during one of these earth change uptick periods. The second region to watch is the area along the Pacific Ocean/Ring of Fire between Peru and the southern border of Mexico, as these two regions represent the areas where the two deep magma waves are regaining momentum/intensity and expected to eventually converge at the California Quake Swarm Area to have a dramatic impact on Yellowstone. 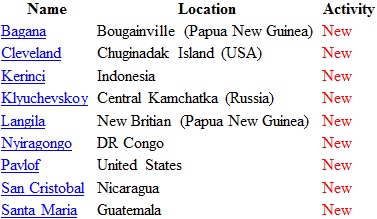 Earth saw nine new volcanic eruptions this week on the high end of the global volcanism scale, as our planet moves into position to pass between the Sun and Black Star and Black Star/Earth proximity reaches the nearest point for the 2016 Earth Orbit Cycle. That means the Black Star/Earth magnetic portal connection will reach the shortest length here in May allowing the maximum percentage of internal conduits to switch over to ‘active’ state increasing Black Star electromagnetic potential for introducing redirected solar electromagnetism into our planet for translation into heat energy via the induction process using Earth metals and salts. The super heating of Earth core raises magma temperatures causing the hot magma to expand to increase internal environmental pressures sending the hot magma to pressure-relief mechanisms in the form of volcanoes popping off from near Black Star/Earth proximity, as our planet moves 66 thousand miles per hour in natural orbit around the Sun. The current earth change uptick period is expected to run to the end of May 2016, until our planet crosses Black Star Orbit Path (May 20th) and Earth begins moving away from the Black Star for the Black Star/Earth magnetic portal connection to begin shortening all the way around to the last week of August 2016 defining the beginning and end of the coming earth change lull period. All of the seismic/volcanic indicators continue to say that our planet will be vulnerable to a Black Star/magnetically-induced geological pole shift around May 20, 2017 with no pole shift threat coming for the 2016 Earth Orbit Cycle.

Those following the research know about my predictions concerning a magnetopause reversal in combination with Martian dust storms in conjunction with the Sun/Earth/Black Star nearside-alignment quake event expected for May 7, 2016, as the red planet is in a very similar position relative to the Sun, Earth and Black Star for the 2012 Earth Orbit Cycle and events surrounding March 12, 2012. One of the biggest stories for this week was reported by MyInformerDaily.com (story link) and BPEarthWatch (watch video) where Earth magnetosphere is said to ‘collapse’ for two hours. Earth magnetosphere did not collapse at all, but Earth is preparing to pass between the Sun and Black Star and the Sun/Earth/Black Star magnetic portal connections are converging. This convergence brings three magnetic portal connections in near proximity creating environmental conditions conducive to portal-to-portal cross firing and massive sprite formation producing highly-charged ionic clouds compressed between the converging portal connections that push the subatomic particle waves through Mars and through the Earth towards the Sun much like we saw leading up to the predicted Guerrero Quake Event from March 20, 2012. We should also expect to see the M-class solar flares transition to X-class flare activity from the Sun western limb before May 7th and/or big activity from the Sun eastern limb once the Black Star is behind our planet following the expected May 7th quake event, as our home star launched the flares as a natural defense mechanism in response to the approaching ionic clouds; which is precisely what happened during the 2012 Earth Orbit Cycle. 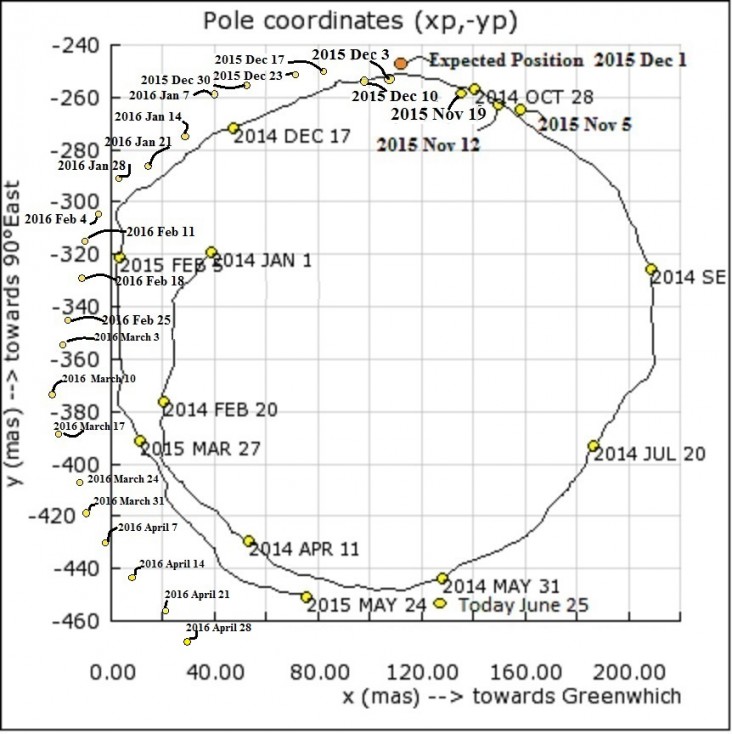 The migrating magnetic North Pole continues to run ahead of schedule covering more ground than any seven-day period we have seen since the Project Black Star Investigation began in January 2011. The old pattern from 2014-2015 where the magnetic North Pole lagged behind the previous year’s position by 11-13 days was broken, when Earth reached outside-orbit position relative to the Sun and Black Star around February 6, 2016. I continue to monitor this movement in search for a new pattern to emerge. The leading hypothesis to explain sudden magnetic pole increased velocity concerns Black Star increased magnetic polarity strength potential growing with the cube of the closing Sun/Black Star proximity, as the Black Star and our Sun are competing for Earth magnetic polarity control. The theory states that the Sun magnetic polarity strength potential is decreasing at the same time that the Black Star potential is increasing, which is the reason that our Sun will eventually turn ‘dark’ (Matt. 24:29-31) and ‘black as sackcloth’ (Rev. 6:12) once the Black Star reaches perihelion position next to our Sun.

Look at the weekly moves and how close the yellow markers are together for the 2013 versus the big moves we see just four years later for 2016 and my statements about the rapidly-moving magnetic North Pole will make more sense. Note the big wide loop we see at the lower left between 2015 and 2016 versus the magnetic North Pole moving along the same track from October 13, 2015 to December 8, 2015. I am wondering if the pattern will see the migrating magnetic North Pole take another path along a similar track for 2016, or if that path might be even well inside the course taken for 2014 and 2015. We shall see.

Project Supporters for this week include Mark, NewCLB, Michael and Christopher who all subscribed to Terral’s 2016 Newsletter at http://terral03.com to receive full benefits. NewCLB and Christopher both signed up for a second subscription with NewCLB being a SuperSubscriber and Contributor to these newsletters from the very beginning in January 2012. You can always find his earth change-related articles in the Earth Change Section of each newsletter, as New has been the one sending me the seismic chart data every week from the very beginning. James, Diane, William, William, Christine and Shalina renewed their subscriptions from previous years as longtime supporters of the Project Black Star Investigation. Randi/Mike made another donation to the research with Susan canceling her subscription after years of project support. Thank you again to everyone supporting the research for making the investigation possible.