Seismic and volcanic indicators all say Earth continues moving through the first earth change lull period for the 2016 Earth Orbit Cycle relative to the inbound Black Star positioned at the feet of the Virgo Constellation relative to the Sun and just below the ecliptic plane.

Right here is where we must pay careful attention to what the Earth is telling us moving from Week 20 to Week 30 of the 2016 Earth Orbit Cycle. Remember that our nearside-alignment quake event came about a week early on April 28, 2016 with the 7.0 Vanuatu Quake in a month that saw peak earthquake activity along with a sharp escalation in new volcanic eruptions events (9, 7, 8 and 9), when Earth magnetosphere collapsed amid increased solar flare activity and Martian dust storms as predicted. Now we watch carefully to see if Earth reaches outside-orbit position too early in say Week 28 or 29 that would suggest the need to reformulate the hypothesis on how the Black Star is moving around a third-point in space; rather than coming in for a perihelion event with our Sun. My gut feeling is that the Black Star electromagnetic/magnetic polarity strength potential is multiplying greatly from near Sun/Black Star proximity causing the repulsion forces between the binary stars to increase much faster than the cube of the closing distance, because the Black Star is actually draining the Sun of electromagnetic/magnetic polarity strength potential at the same time that the Black Star potential is growing. That means the likely scenario is that the Binary Star Magnetic Repulsion forces are increasing at a much-faster rate than the gravitational forces that are growing by the square of the closing distance causing the Black Star to be repelled by the Sun that is slowing down Black Star inbound orbital velocity and leftward movement in the orbit diagram.

The data today suggests that the Black Star is indeed moving around the Sun in anticipation of a perihelion event, but the invisible/collapsed binary twin to our Sun is taking longer to make the move around the Sun than expected. The Earth must continue testifying in this case and we must pay careful attention to that testimony in order to identify a new pattern that I expect to emerge later in the timeline. Remember again that Jupiter reached the magical 90-degree position relative to the Sun and Black Star around January 4, 2014 at the same time that Earth was at outside-orbit position (Screenshot). Jupiter moves left in the orbit diagram at a pace of 30 degrees per year, while the evidence suggests that the Black Star made only a 3-degree move. This means that Jupiter is moving rapidly and actually catching up with the Black Star, which shortens the Black Star/Jupiter magnetic portal connection increasing the percentage of active internal conduits within the portal that increases Black Star potential for injecting the largest planet in our solar system with higher amounts of solar redirected electromagnetism causing even more global warming for Jupiter. This also means that the Black Star potential for injecting our planet with electromagnetic energy siphoned from the Sun can easily be lowered through the period moving forward making Jupiter a culprit in hiding Black Star influences on our planet that puts even more of the Sheeple to sleep. Keep your eye on Jupiter that should become brighter in our nighttime skies, as Jupiter’s core shows more signs of liquefying for the ethane/methane to transform directly into a gaseous state that changes the upper atmospheric appearances that have already reduced the big red spot/storm into something more opaque and very difficult to visualize using our telescopes.

Earth saw just four new volcanic eruptions this week on the low end of the scale, which is expected moving through any earth change lull period. The reason for the lower weekly earthquake and new volcanic eruption values is that Earth has been moving away from the Black Star in natural orbit around the Sun causing the Black Star/Earth magnetic portal connection to lengthen to reduce Black Star electromagnetic potential for our planet and at the same time that Jupiter is moving towards the Black Star in on the left side of the Virgo Constellation. The keyword that characterizes the current new volcanic eruption event pattern is ‘retreat,’ as the two massive/deep magma waves generated by the rising magma plumes around the Pacific Ocean/Ring of Fire have retreated from Alaska through Kamchatka and Japan to the Philippines in the northern regions. We see the same retreat of the southern magma wave deep in Earth mantle from the southern border of Mexico through Central America to the Central Chile/Argentina Border where pressures are moving backwards in the direction of the Origination Zone located in Indonesia where this kind of activity starts up with each new earth change uptick period. 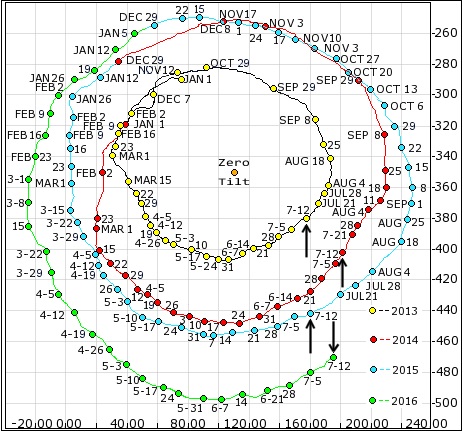 The top Featured Story in this week’s newsletter concerns the deep magma plume formations characterized as “Lava Lamp Blobs” circling the Pacific Ocean/Ring of Fire that I have been warning people about for the last two years. Click on the story link (here) and look carefully at the diagram showing how the largest magma plume activity originates in Indonesia with pressures shifting over to South America pointing directly at Chile where the big 8.3 Chile Quake in Week 34 of the 2015 Orbit Cycle caused a reset in the entire Pacific Ocean/Ring of Fire Seismic/Tectonic Dynamic where we saw a five-week period with none of the 6-magnitude earthquake events following this key earthquake event adding red values to the seismic chart. Then note how the chart graphics show a large magma plume extending north from that position along the South American coast pointing to Central America where that wave is expected to continue moving north to the proliferating California Quake Swarm Area later in the timeline through coming earth change uptick periods. The information shared in this story confirms what I have been saying all along that the entire Pacific Ocean/Ring of Fire is seeing larger and deeper earthquake events in and near the transition zone in Earth mantle at 600 kilometer depths allowing crystalline-type magma to rise/expand and displace heavier magma near the surface that provides stability to Earth crust.

Project supporters for this week include Hugh who subscribed to Terral’s 2016 Newsletter who also sent in a donation by visiting http://terral03.com. Bruce and James renewed their subscriptions from previous years with James being a Super Subscriber among the longest-running supporters of the research since January of 2012 having multiple subscriptions. Randi also made another donation to the research reporting that Mike is recovering from his recent hospital visit with things getting back to something near normal. Thank you to everyone supporting the research for making the investigation possible.