Seismic and volcanic indicators for Week 25 of the 2016 Earth Orbit Cycle relative to the inbound Black Star now positioned in the area of space between the Virgo and Libra Constellations relative to the Sun say that Earth just went through the bounce in seismic/volcanic activity in the same way we saw for 2014 and 2015.

Those following the Project Black Star Research and my weekly Update Reports already realize that we saw the predicted big 7-magnitude earthquake event in the Northern Mariana Islands (USGS) on July 29, 2016 at 212.4 kilometers below the surface. Earth saw three of the 6-magnitude earthquake events representing the average weekly value for Week 25 of the 2014 and 2015 Orbit Cycles. Just twenty six of the 5-mag quake events and just two hundred and six of the 2.5 to 4-mag quake events are well below average, but indicative of what we have seen for the last month of the 2016 Orbit Cycle moving through the first earth change lull period of the year. We are seeing more signs of deeper earthquake activity in the Puerto Rico Trench (video and background info) that can be precursor earthquake events pointing to something much larger coming later in the timeline.

If the 2014 seismic pattern holds true for 2016, then we may not see another big 7-mag quake event until Week 40 some ten weeks into the coming earth change uptick period that begins in the third week of August 2016. However, the 2015 Orbit Cycle saw another 7-magnitude earthquake event in Week 27, so we should be watching to see if the 2016 seismic pattern looks more like 2014 or 2015 in order to gain some idea about what is coming next. I had time this week to compile more seismic data from 2014 through 2016 Seismic Charts in order to create color-coded line charts for helping others recognize the seismic patterns moving through the two well-defined earth change uptick periods and lull periods appearing for each Orbit Cycle. The data sheets have been passed along to Jason who works with this kind of thing at his job. Again, this is a work in progress and I will provide updates and the chart information once we have time to move the project forward for making better presentations and better Black Star Update Reports.

Earth saw six new volcanic eruption events this week on the high end of the scale with focus on Russia. This earthquake event (USGS) took place on July 31, 2016 at more than 300 kilometers below the surface with volcanic activity reported for the 27th, 28th and 31st of July telling us that these events are all related. My expectation moving forward is for the investigation to see more connections between these deep earthquake events moving around the Pacific Ocean/Ring of Fire and volcanic eruptions, as tectonic/volcanic pressures continue shifting from Indonesia over to the Americas with focus on the convergence zone along the US West Coast that changes everything for the United States later in the timeline. These three Russian volcanic eruption events were expected once the coming earth change uptick period began, but not this soon and especially not moving through the earth change lull period. We must watch this region closely to see if these pressures shift south through Japan in retreat mode towards Indonesia, or if the pressures are shifting east into the Aleutians on the way to Alaska.

I highly recommend you read the top article by Ben Davidson (SuspiciousObservers = SO) in the Featured Section with my reply to “EARTHQUAKE BREAKTHROUGH? LEADING SOLAR NEWS COMPANY CHALLENGES THE WORLD’S EXPERTS,” submitted by Sheldon Day. Davidson is constantly going through a myriad of gymnastic moves in order to explain his Sleeping Sun Theory, while at the same time trying to explain how the Sun is causing big seismic events on our planet; which I find nonsensical and contradictory in light of the larger body of evidence. Davidson does mention magnetic portal connections in his article, but then shows little indication of actually using the science to explain anything concerning the many changes taking place all around us. I would expect SO to include information about the recent magnetopause reversals (2012 and 2016) amid the Martian dust storms (2012 and 2016) in his presentation, but he seems more interested in challenging the expert’s claims that there is no connection between solar activity and generation of earthquakes than anything else. 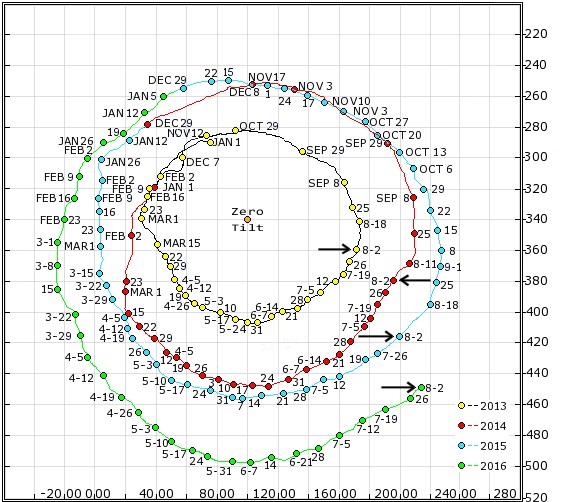 The migrating magnetic North Pole showed the smallest weekly move since the 2016 Earth Orbit Cycle began in the first week of February now trailing last year’s position by about the three days expected for matching the three-day delay in the 2016 Seismic Chart. The interesting detail to note is that the ten-day delay from 2013 to 2014 and the twelve-day delay from 2014 to 2015 match the three-day delay we see this year with all following the same delay we see in the Seismic Chart Data for the last four years for this part of the Cycle in August. The data suggests that the magnetic North Pole is right on schedule to cross the -360 mark in the chart on September 5th as predicted showing that there is definitely a connection between Earth magnetics and weekly earthquake events taking place around the globe. Remember that the shifting magnetic patterns from space satellite images were the basis for the Grim Report (link) issued by the Russians back in 2014 that also makes the Earth magnetics/earthquake connection that I feel to be an accurate interpretation of the available evidence in this case.

Project supporters for this week include Rosemary, John, Steve and Melissa all hitting the Subscribe Button at http://terral03.com to become valued Newsletter Subscribers to Terral’s 2016 Newsletter (just 25 dollars per year) earning them full subscriber benefits for the life of their subscriptions. Brennan, Brian, Jennifer and Darlene all renewed their subscriptions from previous years with Randi making another donation to the research. Thank you very much to everyone supporting the research at http://terral03.com for making these investigations possible. Terral

Read the Full Report and related articles using a complimentary link to Terral’s 2016 Newsletter Volume 31. Subscribe and support the research at http://terral03.com.