Global seismic and new volcanic eruption event data indicators all say that Earth continues moving through the first of two earth change lull periods for the 2016 Earth Orbit Cycle relative to the inbound Black Star positioned between the Virgo and Libra Constellations relative to the Sun.

Year-over-year earthquake event values for Week 27 show that my big 7-magnitude earthquake event (USGS) took place right on schedule suggesting that the seismic pattern for the 2016 Earth Orbit Cycle is mirroring what we saw for 2015 very closely through the waning stages of the current earth change lull period expected to end, by the end of August 2016 in Week 29 or Week 30.

Compare the 2016 weekly earthquake event values from Week 25 through Week 27 to what we saw last year to realize we see the same two 7+ magnitude quake events with between one and three 6-magnitude quake events revealing the same seismic pattern taking place about two weeks later in the calendar year. We should see the number of 5-mag quake events move lower by Week 30 with two sub-20 values appearing together once Earth reaches outside-orbit position (O) accompanied by two weeks of sub-200 values for the key 2.5 to 4 magnitude indicator quakes that bounced up to 218 as expected. Right now the seismic pattern suggests that the April 28, 2016 Sun/Earth/Black Star nearside-alignment quake event (N) represents an anomaly in the chart that should have taken place in early May, but for some reason took place earlier than expected. After all, if the Earth passed between the Sun and Black Star just three days later than last year, then the seismic chart should continue showing the same three-day delay; as our planet continues moving at an average of 66,000 miles per hour around the Sun, which is definitely not the case. Current seismic data suggests that the Black Star has moved farther into Libra than I suspected in late April and that the original warning date for a May 20, 2017 Black Star/Earth Crossing Event might very well still be in the cards moving forward. We will know more once Earth reaches outside-orbit position and when Earth passes behind the Sun relative to the Black Star currently scheduled for the end of November 2016; depending on whether those events take place earlier or later than expected. 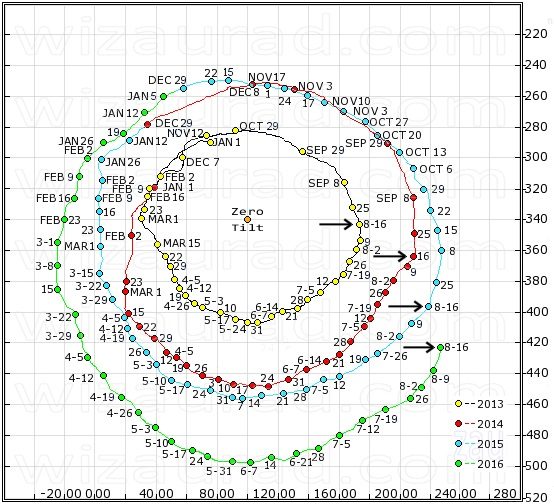 The magnetic North Pole migration chart shows the magnetic pole is trailing last year’s position by about one week, which is somewhere between the three-day delay identified for the 7.8 Nepal Quake (April 25, 2015) and the 7.0 Vanuatu Quake (April 28, 2016) and the twelve-day delay created by the 188-day cycle that has dominated Black Star leftward movement in the orbit diagram for the last decade. I am very interested to see the date that the magnetic North Pole crosses the -360 mark currently scheduled for September 5, 2016 that could come earlier than expected, as the magnetic pole appears to be slowing down to match the seismic data providing more evidence that the Black Star is farther left in the orbit diagram and farther into Libra than previously suspected.

One of the top articles posted in the Featured Section below (link) concerns NASA’s prediction that a MASSIVE earthquake is expected to strike the US West Coast within the next two years, which coincides with warnings shared in my Black Star Update Reports concerning the global seismic/volcanic pressure shifts from the Indonesian side of the Pacific Ocean/Ring of Fire over to the Americas. A series of large/deep earthquake events have been taking place around the northern and southern regions of the Pacific Ocean/Ring of Fire pointing to the widening California Quake Swarm Area as the Convergence Zone where the two deep magma waves are expected to converge later in the timeline. These deep magma waves were created by deep earthquake events in the transition zone of Earth mantle generating large/rising magma plumes that help the forming magma waves gain momentum through the earth change uptick periods for things to subside and settle down during the lull periods like we are seeing right now. Three new articles were released this week on the Planet 9 topic (link and link and link) that I feel are part of an elaborate lettered agency-induced mis/disinformation program providing excuses for the changes taking place all over the solar system from the Black Star moving through the inner solar system. Bart also sent in information on Gill Broussard’s new radio show interview (link) that many might find interesting posted in the On The Air Section of this newsletter. My arguments against much of what Broussard brings to the table appear in Volume 16 of Terral’s 2015 Newsletter (link) if anybody is interested.

Project supporters for this week include Leanne, Elmer, Mike and Amara all subscribing to Terral’s 2016 Newsletter at http://terral03.com to receive full subscriber benefits for just 25 dollars per year. Steve, Steven and Andrew renewed subscriptions from previous years with Randi making another donation to the research. Remember that you can listen to my Black Star Update Reports live on Revolution Radio at http://www.freedomslips.com every Thursday from 4 to 5PM ET with a link to the recording posted in the newsletter on the final page in the Radio Section for those unable to hear the show live. Thank you again to everyone supporting the research for making the investigation possible. Terral

Read the Full Report and related articles using a complimentary link to Terral’s 2016 Newsletter Volume 33. Subscribe and support the research at http://terral03.com.