Seismic and new volcanic eruption event indicators all say Earth is moving through the second earth change uptick period of the 2016 Earth Orbit Cycle relative to the inbound Black Star positioned in the Libra Constellation relative to the Sun. We typically see a rise in global earthquake activity moving from outside-orbit position (August 19, 2016) into the earth change uptick period to then see things settle down briefly, before a new round of earthquake events sends the weekly event chart values up again. We appear to be moving through the first mini-lull period in Week 32 of the 2016 Orbit Cycle representing a brief pause, before seismic activity around the world returns to a more-recognizable uptick mode.

Year-over-year weekly seismic event values for Week 32 shows an uptick in the 6-magnitude earthquake events with the 5-mag and 2.5 to 4-mag global quake events running on the lower end of the scale. We are monitoring these weekly seismic values very carefully for signs of an extended lull, during the current earth change uptick period, because of the smaller-than-expected 3-degree Black Star move in the orbit diagram reduced from the 12-degree average annual move over the course of the last decade. Remember that the first earth change uptick period for each Earth Orbit Cycle is caused by Earth turning around in natural orbit of the Sun to begin moving towards the Black Star causing the Black Star/Earth magnetic portal connection to shorten rapidly, which was verified again this year in April 2016. The 3-degree Black Star move in the orbit diagram is determined by the number of days the Sun/Earth/Black Star alignment quake event comes for 2016 relative to last year in 2015, which in this case is the 7.0 Vanuatu Quake Event from April 28, 2016 compared to the 7.8 Nepal Quake from April 25, 2015 giving us just three days (3 degrees). However, Earth moved to outside-orbit position making the 90-degree right-triangle location relative to the Sun and Black Star around August 19, 2016 in Week 28 also about two weeks early, which should be expected in light of the fact that the nearside-alignment quake event also came too early in Week 12. The current earth change uptick period is caused not by Earth moving towards the Black Star like in February, but Earth is moving through the area of space where the Black Star will eventually reach perihelion; which means the Black Star is now traveling in the direction of our planet moving crossways through the Black Star headlights. A miniscule 3-degree Black Star move left in the orbit diagram means the Black Star/Earth magnetic portal connection is shortening, but at one quarter the rate we saw from previous years. This is the first time since the investigation started in January 2011 that the Black Star has made this small move left in the orbit diagram, which means we have no predictive modeling to forecast what comes next. My expectation is that the current earth change uptick period will see lower-than-expected seismicity, until we reach the peak of activity moving through November and particularly going into the final week around Thanksgiving.

No red values appear for Week 32 of the 2016 cycle, as the highest weekly value the year (51) for the 5-magnitude earthquake events has reached just 20 events actually just below the weekly event average. The values you see here for Week 32 look very much like Week 30 for previous years, when Earth reached outside-orbit position to record the lowest numbers across the board for the entire orbit cycle. That being said, we could also be looking at calm in seismic activity before a coming storm. The featured earthquake event on Equake3D right now is the 4.7 quake event northwest of Ndoi Island, Fiji (USGS). While the magnitude seems small, the earthquake event took place 657.1 kilometers below the surface; which would have been a record-breaking earthquake event, before May 2015 with the 7.8 Japan quake that took place 677 kilometers below the surface; following a month behind the 7.8 Nepal quake. Watch for these deep quake events to jump across the Pacific Ocean into South America between now and December 1, 2016, which is according to the pattern we saw last year with the two Peru quake events (USGS) at more than 600 kilometers deep at our backside alignment on November 24, 2016.

Earth saw five new volcanic eruption events this week with focus on the region between the Philippines and Russia on the northern side of the Pacific Ocean/Ring of Fire where I expect these pressures to push into the Aleutians later in the timeline. Those new to the Project Black Star Investigation should see important information from Volume 28 (link) explaining Rising Magma Plumes and how seismic/volcanic pressures are shifting from Indonesia over to the Americas and now into the Atlantic Ocean, as Earth has gone through a series of Tectonic/Volcanic Resets (Sumatra 2004, Solomon Islands 2013, Chile 2015); and as our planet is seeking to maintain equilibrium amid these dramatic changes taking place all around us.

Earth saw five new volcanic eruption events this week with focus on the region between the Philippines and Russia on the northern side of the Pacific Ocean/Ring of Fire where I expect these pressures to push into the Aleutians later in the timeline. Those new to the Project Black Star Investigation should see important information from Volume 28 (link) explaining Rising Magma Plumes and how seismic/volcanic pressures are shifting from Indonesia over to the Americas and now into the Atlantic Ocean, as Earth has gone through a series of Tectonic/Volcanic Resets (Sumatra 2004, Solomon Islands 2013, Chile 2015); and as our planet is seeking to maintain equilibrium amid these dramatic changes taking place all around us. 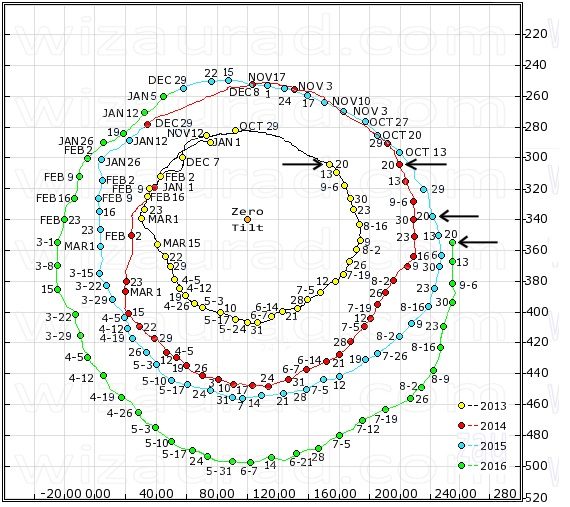 The migrating magnetic North Pole appears to have crossed the -360 mark on September 17, 2016, about ten days later than last year. We have been watching magnetic North Pole movement very carefully to determine if the variance from last year was closer to three days or twelve days for comparison to data collected in the 2015/2016 Seismic Chart. The interesting observation for me is that the current magnetic North Pole path is moving straight up the chart for a two-week period (9/6-9/20) matching a similar move from 2014 from August 16th to September 6th that is not typical of 2013 and 2015. We see that the 2015 path crosses the 2014 path on October 16, 2015 making me wonder which day the same event will happen in 2016, as we search the chart for patterns to help us construct superior predictive models. I remain convinced that the migrating magnetic North Pole movement has nothing to do with shifting Earth metals, which is suspected to be the reason that Earth magnetic poles flip three to seven times every million years; but the magnetic North Pole is under the influence of a third powerful magnetic that is the inbound Black Star competing for Earth magnetic polarity control with the Sun. We need more input data to help us identify correlations between this information and the Seismic Chart data, before we can begin drawing definitive conclusions helping us build better predictive models moving forward.

You are already seeing Black Star News update reports being uploaded to the Terral BlackStar YouTube Channel, which I hope to begin doing every day. Support is growing for the Project Black Star Investigation and my related Scripture and 911 Inside Job Projects at http://terral03.com and I want to begin making regular News reports to keep subscribers and contributors updated; as the reports come across my desk. I am pleased to announce that survival groups are forming in the Ozarks and that newsletter subscribers and contributors can write me at the Gmail email account giving me permission to share your email contact information with group leaders to begin the screening process; giving you the opportunity to meet and greet like-minded people building strong survival groups in a real safe zone area. My assistance in helping survival group leaders and new survival member recruits make contact is only for valued newsletter subscribers and contributors. Therefore, if you are a non-subscriber to my weekly newsletters, then the first step to making contact with survival group leaders in the Ozarks is to click the Subscribe button at http://terral03.com giving you full subscriber benefits and the special Gmail email account address created for these kinds of communications. Jason and I have been exchanging emails all week and deliberating the science explaining Black Star features, characteristics and behavior with the substance of our deliberations posted in the Featured Section of this newsletter for those interested. All the hubbub pertaining to the Killer Asteroid disinformation going around the internet is addressed in the top Featured Article sent in by Rose and Sandy.

Project supporters for this week include Tim, Edison, Delilah, Larry, John, Darrell, Roxanne, Robert, Dennis, John, Les, Nick, Tom, Rob, JM, Robert, Christopher, Kenneth and Ron all subscribing to Terral’s 2016 Newsletter at http://terral03.com giving them full subscriber benefits for the life of their subscriptions for only 25 dollars per year. Henry and Paul renewed their subscriptions from previous years with Robert, Frederick, Christine, Joy and Randy making donations to the research. Thank you again to everyone supporting the research for making the investigation possible. The Project Black Star Investigation is shifting into a higher gear, as I am doing my best to improve the substance and frequency of the reports as time permits. Terral