Seismic and volcanic indicators say Earth is moving through the second earth change uptick period for the 2016 Earth Orbit Cycle relative to the inbound Black Star moving left in the orbit diagram/solar system in the Libra Constellation relative to the Sun.

Year-over-year weekly seismic event values for Week 33 show a marked increase over previous years with five of the 6-magnitude earthquake events representing only the third time we have seen five or more of these weekly quake values for the entire year. The reason for the seeming disparity in the seismic chart is that typically Earth reaches outside-orbit position (O in chart) making the 90-degree right triangle location relative to the Sun and Black Star in Week 30, but this year we reached that key marker position about two weeks too early in Week 28 as you will see below.

Earth saw the sub-200 value for the 2.5 to 4-magnitude earthquake events in Week 28 for a brief surge across the board from Week 28 through Week 30 showing us a well-defined seismic uptick taking place globally. The twenty-five value for the 5-mag quake events jumped up to fifty one events marking the yearly high value for these moderate earthquake events, but that weekly valued dropped in just two weeks down to just twenty events. Earth receives a jolt of Black Star redirected solar electromagnetism once we move beyond outside-orbit position, as our planet turns around in orbit to begin the six-month trek behind the Sun marking a key period where the Black Star/Earth magnetic portal connection is shortening rapidly based upon Black Star inbound orbital velocity. Earth is passing through the Black Star headlights on way to passing behind the Sun relative to the Black Star in the last week of November 2016.

An interesting note is that Earth magnetosphere developed a third ring in 2012 (article), when our planet was moving in this same quadrant of space shortly after reaching outside-orbit position. We should not be surprised to see a similar story coming out in the next six months saying much the same thing for the 2016 cycle. The reason for the anomaly is due to the Black Star moving in our direction causing the Black Star/Earth magnetic portal connection to shorten at the same time that the Earth has just turned around in orbit causing the portal connection to straighten from the previous bow shape that persisted for the previous three-month period. The highly-charged subatomic particles flows within the Black Star/Earth magnetic portal connection are accelerated causing segments of the portal connection to grow dramatically in diameter, as internal active conduit pressures fluctuate; giving our planet sudden electromagnetic energy bursts energizing Earth magnetosphere for a brief period.

Earth saw five new volcanic eruption events this week with focus on the origination zone in Indonesia where we typically see new volcanic eruption events to begin each earth change uptick period. Pressures from the deep magma plume waves pushing around the northern regions of the Pacific Ocean/Ring of Fire are currently finding relief in Kamchatka with volcanic pressures expected to push east into the Aleutians later in the timeline. The deep magma plume wave pushing around the southern regions of the Pacific Ocean/Ring of Fire is currently finding relief in Ecuador and Costa Rica with those pressures expected to push north into Mexico, which has actually already happened (story) since this week’s reporting period ended. We should expect to see these seismic/volcanic pressures continue shifting around the Pacific Ocean/Ring of Fire, until these two deep magma plume waves converge at the growing California Quake Swarm Area activating the bulging Yellowstone Reservoir/Magma Chamber bringing catastrophe to the entire US Canada West Coast. 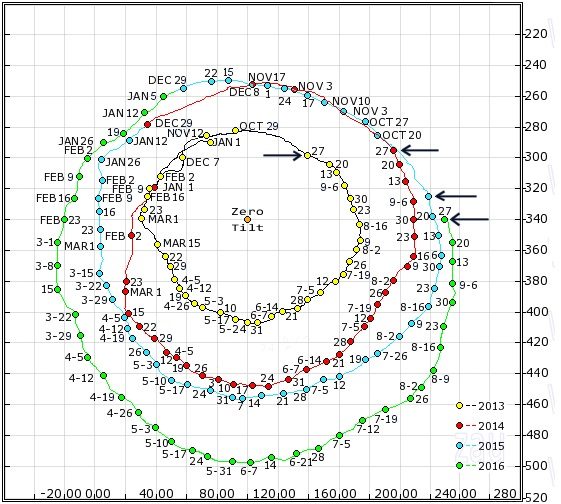 The migrating magnetic North Pole made a big jump this week moving almost twice the distance as last week with a shift to the left at about the same angle from last year. The migrating pole has moved ahead of last year’s position by about one week directly between the three and twelve days found in the seismic chart for our two recent nearside-alignment quake events from 2015 and 2016. Remember that the Black Star was moving left in the orbit diagram and average of twelve degrees from 2004 to 2015, but made a move of just three degrees for the 2016 orbit cycle. I expect the green line to reach the top of the chart in combination with the coming Earth/Sun/Black Star backside alignment quake event (B in chart) in the last week of November should the current pattern hold.

Steve Olson interviewed me the WSO Channel on Wednesday afternoon (9.28.2016) beginning at 3:30 PM Eastern Time (Show Link) where he asked me to share information on the Project Black Star Investigation. Steve was once again very cordial throughout the interview giving me time to respond to his rapid-fire type questions using SolarSystemScope and EQuake3D to illustrate how the Black Star is causing the two well-defined earth change uptick periods and lull periods using the ZOOM format. A permanent link to the WSO interview is posted atop the Radio Section these newsletters with the first interview link, as these are two of the best interviews made since the investigation began in January 2011. My interview with Eric Gajewski (more info) is scheduled for October 11, 2016 at 2PM Eastern Time.

with Ben and Randi making donations to the research. Thank you to everyone supporting the research for making the investigation possible. Please share links to these weekly newsletters with others to help them become informed about what is coming from space. Terral

Read the Full Report and related articles using a complimentary link to Terral’s 2016 Newsletter Volume 39. Subscribe and support the research at http://terral03.com.