Seismic and volcanic indicators all say Earth is passing through the second earth change uptick period for the 2016 Earth Orbit Cycle relative to the Black Star moving left in the orbit diagram and solar system in the Libra Constellation relative to the Sun.

Week 34 of the 2016 orbit cycle shows a marked uptick in seismic activity using the 2014 seismic values. We cannot make comparisons very well between 2015 and 2016; because last year Earth saw the 8.3 Chile Quake Event in Week 34 causing a tectonic/volcanic reset for the entire Pacific Ocean/Ring of Fire that has progressed to now have great impact on the entire world. Anyone not familiar with rising magma plumes from Earth mantle transition zone should see the featured article from Volume 28 (here) to better understand the analysis from this Black Star Update Report.

Week-over-week seismic event values have deceased across the board representing a warning sign in my mind that seismic/volcanic pressures are intensifying ahead of what could be another big earthquake event like we saw last year with the big 8.3 Chile Quake. My expectation is that the coming big quake event will take place between the west coast of Peru and Mexico with focus on Central America, as the deep rising magma plume pressures continue to push north from the western coast of Chile. Remember that these magma plume pressures began in Indonesia that I characterize as the ‘origination zone’ where we see big seismic/volcanic events to begin each earth change uptick period. Those deep magma pressures shift north through the Philippines, Japan and Kamchatka to eventually push through the Aleutians and into Alaska and west from Indonesia through the Fiji region to South America (pointing at Chile) to then shift north through Central America, Mexico and eventually into the widening California Quake Swarm Area. We are already seeing deeper earthquake activity in the California Quake Swarm Area with reports of increasing activity at the bulging Yellowstone reservoir, magma chamber and regional calderas.

The important earthquake events for this week include many deep earthquake events in the Fiji area (USGS) at 607 kilometers below the surface very near the same depth as the two 7.6 Peru Quake Events from November 24, 2015 (USGS) at our Earth/Sun/Black Star backside alignment. Now compare the depths from those two earthquake events to our next important quake event in Argentina (USGS) to realize they are all practically identical and very near the bottom of the Earth mantle transition zone (Wiki). This 433 kilometer deep earthquake event off the coast of Japan (USGS) provides more evidence that seismic/volcanic pressures are already shifting north into Kamchatka on the way to the Aleutians expected later in the timeline. My prediction for seismic activity to take place near Earth equator at the Mid-Atlantic Ridge was fulfilled this week with these two related quake events (USGS and USGS) that came much too early in the current earth change uptick period. There is reason for concern, as we are watching key earthquake events taking place too early in the current earth change uptick period, because the modeling cannot predict what is coming next with great accuracy. While weekly seismic event values are relatively low, the seismic pattern taking place around the world is throwing up warning signs that deep magma plume activity is intensifying beyond the point of what we saw for the last two earth change uptick periods with two months of uptick period remaining. Watch for a peak in seismic activity for the last week of November 2016 much like we saw in April, as our planet passes behind the Sun relative to the inbound Black Star.

Earth saw seven new volcanic eruptions this week with focus on Indonesia (origination zone) and the area between Peru and Mexico where deep magma plume activity is expected to migrate north over the next two months. I am expecting the seismologists/volcanologists in Arizona to begin sounding the alarm at any time, as these seismic/volcanic pressures continue surging towards the US/Canada West Coast. Seven new volcanic eruptions events for a single week is rather high, because we are not yet half way through the earth change uptick period. This is another warning indicator that a dark volcanic cloud is on the horizon particularly around the Pacific Ocean/Ring of Fire in the areas already mentioned. 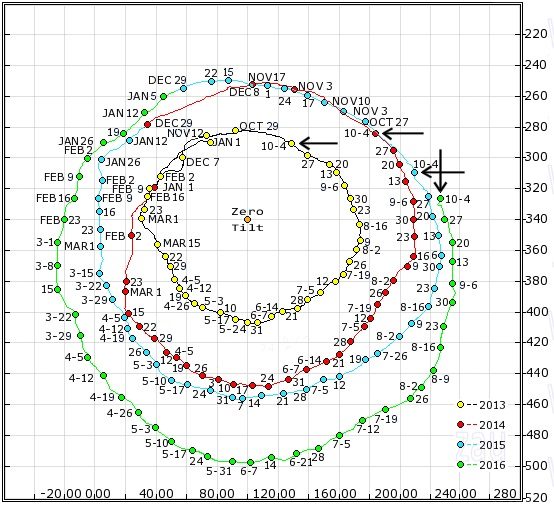 The magnetic North Pole continues moving ahead of last year’s position by about the same seven days we saw last week. We are watching to identify the day that the 2016 migration path (in green) crosses the 2015 migration path (in blue) in order to identify a pattern that might help us build better predictive models through comparative analysis with what we see in the growing seismic chart in combination with the new weekly volcanic eruption patterns. My expectation right now is that the green path will reach the top of the chart a week or so after our Earth/Sun/Black Star backside-alignment quake event scheduled for the last week of November 2016.

Tom wrote and asked me to make a YouTube video providing an Overview of the Project Black Star Investigation (link) to be shared with family members and friends to help them wake up about what is coming from space. You can read his request and my reply in the top story of the Featured Section in this newsletter below this update report. Sandy wrote in with a set of coordinates for me to check out as the second Featured article that some might find interesting. Bonnie and I go back and forth in an exchange over Black Star-related questions that might help those new to the research connect more of the dots in the ongoing investigation. Clint is a very talented man who has written a book on Survival and another on Cancer that he is allowing me to post in the 2016 Dropbox Folder for all valued newsletter subscribers and contributors to the research. Clint has asked me to make additions to the Survival book to incorporate threat assessment and contingency planning information from my Project Black Star Investigation that we both agree will make the work a valuable resource for those making preparations for what appears to be an extinction-level event. Clint has forwarded me his books and I will make my additions as time permits.

Project supporters for this week include Jeffrey, Russell, Germano, Wes, Carrie, Carol, Steven, Darlene, Stephen, Richard, Henk, Vicky, Jeffrey, Korey, Steven, Simon, Christopher, Caroline, Mitzi, Robin, Robert and Mary all hitting the Subscribe Button at http://terral03.com to receive full subscriber benefits for only 25 dollars per year. Michael, Dennis, Craig and Ron renewed their subscriptions from previous years with Dennis, Darlene and Randi making donations to the research. Thank you very much to everyone supporting the research for making the investigation possible. Terral