The weekly seismic data for this Update Report has yet to arrive, but I should have access to that information this evening. Right now Earth is at the 90-degree right triangle position relative to the Sun and Black Star marking the time that our planet sees minimum values for earthquake events across the board.

To give you some indication of where we are at the end of this 2015 Earth Orbit Cycle, I have included the quake data for last week above with the asterisk (*) showing almost-identical values. I will update the information for this week and re-upload the newsletter once New sends me the information hopefully later this afternoon/evening.

The 2.5 to 4-magnitude earthquake events should continue the gradual decline to sub-200 event levels for Week 54 that ends the current earth change lull period to begin the 2016 Earth Orbit Cycle relative to the inbound Black Star. Earth is in position right now to turn around in natural orbit of the Sun to begin moving towards the Libra Constellation, but we continue to move within the predicted transition period and the Black Star/Earth magnetic portal connection is preparing to shorten rapidly once our planet has sufficient time to make the critical move through this area of space on the winter orbit side of our solar system from the northern hemisphere perspective.

Earth saw seven new volcanic eruptions this week with emphasis on the regions where the two subterranean magma waves stalled along the northern and South American regions of the Pacific Ocean/Ring of Fire. The deeper earthquake activity is sending large magma plumes towards the surface where pressures are intensifying and the rising/pressurized magma is seeking pressure-relief mechanisms in the form of volcanoes that are activating above the locations where the magma plumes are rising/expanding. This week is among the busiest yet with news articles coming in from subscribers and contributors on a wide range of topics including Obama’s Executive Order ‘Establishing A Federal Earthquake Risk Management Standard‘ and the White House preparing for a wide range of natural disasters related to the earth changes created by the inbound Black Star. An increasing number of articles continue pouring in on the eminent threat from activity in the Cascadia Subduction Zone where I believe the crucial linchpin quake event will change everything for the US/Canada West Coast and eventually the entire United States. The dominoes are already set up through recent events in and around the Pacific Ocean/Ring of Fire with more and more people recognizing the patterns pointing to severe and catastrophic events coming for California and the entire US/Canada West Coast that can potentially affect everyone living anywhere near the Pacific Ocean coastlines from the tsunami threats. Nobody should be surprised to see these warnings, as I have been pointing to devastation coming to the US West Coast now for a long time. 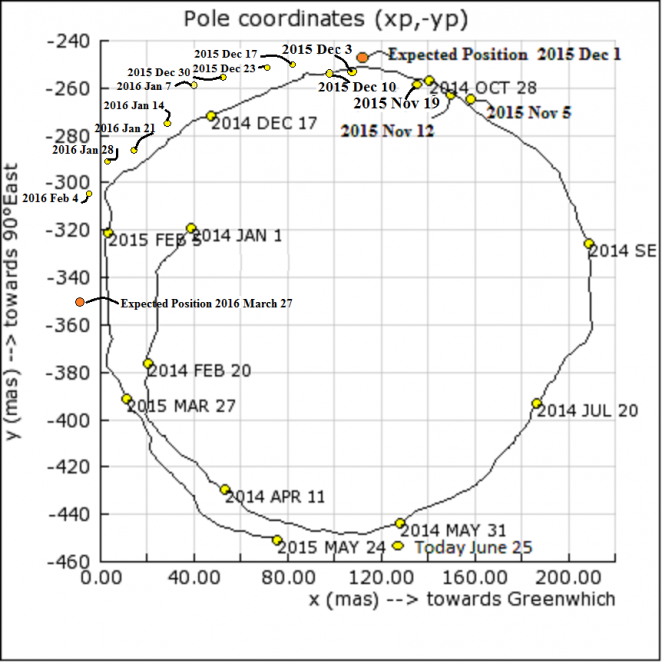 The migrating magnetic North Pole jumped the 0.00 line this week and should soon begin the move straight down the chart like we have seen on the previous two Earth Orbit Cycles. The data now seems to indicate that my Expected Position 2016 March 27 should be placed below the -360 mark instead of above, but we will see how things shake out moving forward.

There is a ton of information in the lengthy newsletter on the Zika Virus with all kinds of opinions about what is really going on with what appears to be some kind of biological weapon, or another Big Phrama conspiracy to extract billions from the Sheeple using vaccines. There is simply insufficient data to draw definitive conclusions at this time, but I want the readers of this newsletter to have access to information being passed around on the internet allowing you to draw your own conclusions; until I have time to break the information down for recognizing the patterns helping us to eventually come to the knowledge of the truth on this important topic. The Elite will likely incorporate some kind of contagion into the mix, as part of their Fail Safe Plan, limiting Sheeple Population Movement at the same time that they are running to their underground Ark Cities, but that should come later down the road.

Read the Full Report and related articles using this complimentary link to Terral’s 2016 Newsletter Volume 5. Subscribe and support the research at http://terral03.com/